Shares of Altria Group (NYSE: MO) have been falling for more than two years.

This could be because an increasing number of investors don’t want to invest in a cigarette company for ethical reasons, or it could be because it’s hard to get excited about a business when the majority of its customers want to quit using its product.

It’s tough enough already from a business and public relations perspective to be a tobacco company.

But now Altria is facing difficulties with Juul.

So with all of that going on, it’s no wonder the stock is down and dividend investors are as jittery as a new ex-smoker 24 hours after their last smoke. 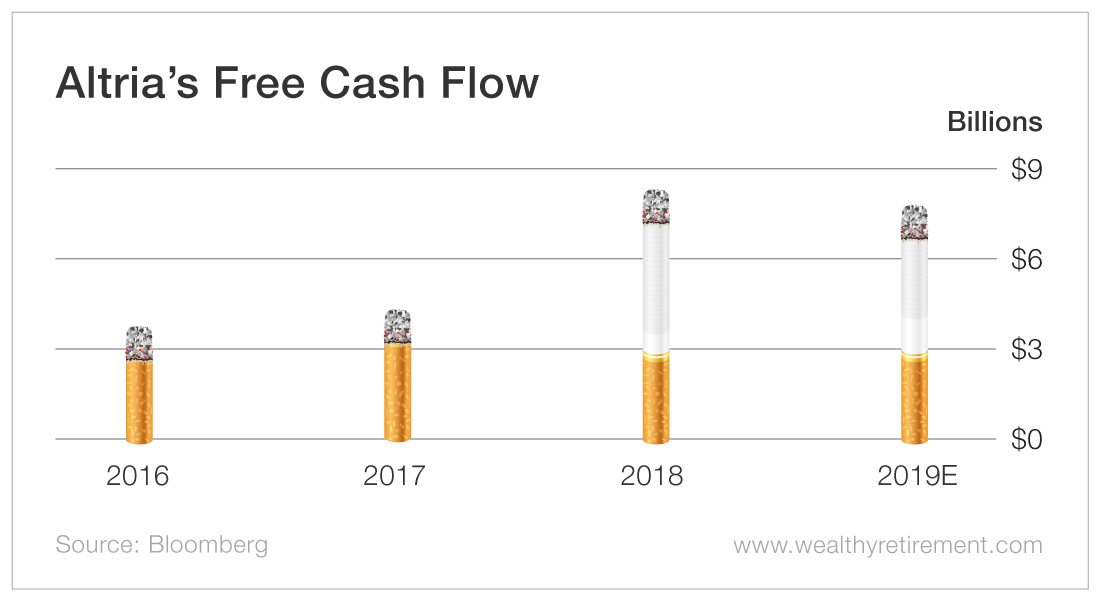 Last year, Altria paid out 73% of its free cash flow in dividends, which is within my comfort zone of 75%.

Based on the estimate for 2019, the payout ratio will be 81%, which is a little higher than I like and results in a penalty from SafetyNet Pro.

If free cash flow comes in higher than expected and knocks the payout ratio down to 75% or below, Altria could receive an upgrade next year.

The company has a good track record of raising dividends. Though Altria cut the payout in 2008, it began raising the dividend immediately.

So even though there was a dividend reduction, it was more than 10 years ago – which SafetyNet Pro does not consider.

The fact that Altria has raised the dividend every year since adds to the company’s dividend safety rating.

But cash flow remains sufficient to pay the dividend.

The next 12 to 18 months will be critical for the company.

I’ll be watching free cash flow carefully. Any changes could result in an upgrade or downgrade to the dividend safety rating.

For the immediate future, the 7.9% dividend yield is safe.