Dunkin’ Brands Group (Nasdaq: DNKN) – most of you are probably familiar with Dunkin’ Brands and its main franchise Dunkin’ Donuts. However, the company also has the Baskin-Robbins ice cream brand. The company also offers its Dunkin’ brand coffee in both K-Cup pods and ready-to-drink bottles of iced coffee.

As of the end of March, the company had 12,900 Dunkin’ Donuts restaurants in operation worldwide and 8,000 Baskin-Robbins restaurants. Dunkin’ Brands is headquartered in Canton, Massachusetts.

Looking at Dunkin’s fundamentals, we see that the company has seen its earnings grow by 13% per year over the last three years and they grew by 12% in the most recent quarter.

Sales have increased at a rate of 21% over the last three years, but they were only up by 2% in the second quarter.

One indicator that I normally look at wasn’t available for Dunkin’ and that is the return on equity.

I checked three different sources and none of them showed an ROE.

I did however find the return on total capital and it was 14.77%.

One thing that really jumped out about Dunkin’ Brands is the sentiment. There are 28 analysts covering the stock right now with six “buy” ratings, 21 “hold” ratings, and one “sell” rating. That puts the buy percentage at a paltry 21.4%.

The short interest ratio is also indicating high pessimism toward the stock with a current reading of 6.74. The ratio has been elevated for most of the past year, even as the stock has continued to climb. 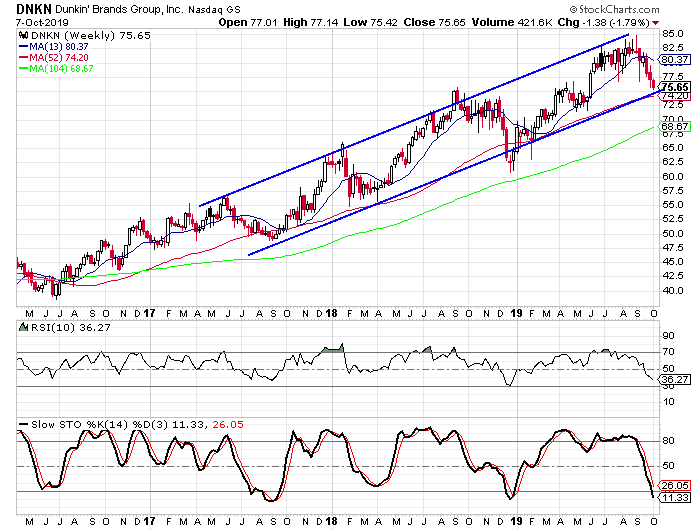 We see on the weekly chart that Dunkin’ has been trending higher with a trend channel forming to define the various cycles within the overall trend. The stock is close to the lower rail at this point in time and the weekly overbought/oversold indicators are at their lowest levels since December.

You should also note that the 52-week moving average is right in the same area as the lower rail of the channel and should provide two layers of support for the stock.

You should be aware that the company is set to release third quarter earnings results on October 31. Hopefully the company will provide investors with a treat that day and not a trick.