You already know the next metal in the sequence. Just about everyone does.

Sure, American Express has the Gold Card. But you know what card is above it – the Platinum Card.

Platinum is universally known for being above gold… It’s the ultimate award level. It’s how you know you’re getting the best of the best.

But it’s more than a marketing shtick. Today, it’s an investment opportunity in the making…

For most of history, platinum has been more valuable than gold.

To share one example… in March 2008, platinum traded up to more than $2,200 per ounce. At the same time, gold was trading around $1,000 per ounce. Platinum was more than twice as valuable as gold.

That was an extreme moment. But over the last 25 years, platinum has still historically traded at a 34% premium over gold.

Here’s the amazing part… Platinum isn’t trading at its historic average value, which would put it at $2,000 an ounce today. Instead, it sells for less than half that.

Gold gets the glory these days. It gets the headlines. And lately, it’s deserved it.

The metal has had a meteoric boom in recent months, thanks in part to easy money policy. The Federal Reserve is back to cutting interest rates. And negative rates have become more common around the world.

Government bonds pay nothing. So investors aren’t missing out on yield by holding gold or other precious metals. That’s a major boost for gold… and in turn, platinum.

Gold is also the classic “fear hedge.” And there’s a lot of fear in the market today…

The bull market is nearing its end. The trade war between the U.S. and China lingers. The Iran conflict is simmering. And Europe is struggling with Brexit, as the deadline nears for the U.K. to leave the European Union.

All of that has been incredible for gold. And it’s bullish for platinum, too. Here’s the thing, though…

We can tell by looking at the gold Commitment of Traders (“COT”) report. It’s a weekly report that tells us what futures traders are doing with their money.

When traders all pile up on one side of a trade, you know that the bet is getting oversaturated. And it indicates that a reversal is possible. Check it out… 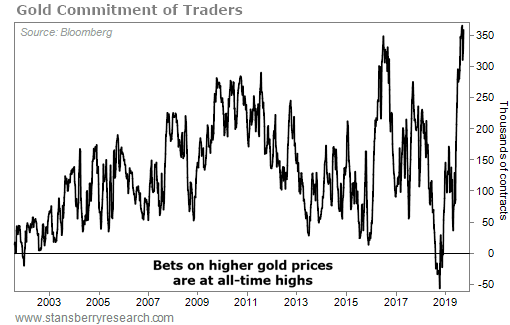 Now let me be clear… I’m not telling you to rush out and sell your gold holdings. There could be plenty of upside left in the gold trade. But the gold market has shifted from “hated” to “loved” in recent weeks.

Meanwhile, platinum is dirt-cheap. It would trade above $2,000 an ounce if it were to get back to its typical premium to gold.

The metal needs to more than double to hit that level… And that’s why you should consider owning the king of precious metals right now.