This is the kind of behavior you’d expect after a massive drawdown – not after a strong move higher.

Today, investors are throwing in the towel on a major foreign market. The crazy part is, this part of the world hasn’t been losing money… It’s been booming.

Its stock market is up 12% this year. That’s the kind of return that should bring investors pouring in. But instead, they’re turning away.

There’s good news, though. This is a contrarian investor’s dream…

We have a major market that’s performing well. The trend is clearly moving higher. But investors are scared… And they’re selling.

It’s a perfect setup and, based on history, one you need to consider putting your money to work in now.

Investors usually flood in as a market rallies. But that’s not happening right now in Japan.

Despite Japanese stocks jumping 12% this year, investors are giving up on them.

You might not realize it, but shares outstanding are a fantastic tool for tracking investor sentiment…

ETFs like EWJ liquidate and create shares based on investor demand. If investors aren’t interested in Japan, they’ll pull money out of the fund and shares outstanding will fall. But if investors are “all in” on Japanese stocks, money flows in and share counts rise.

Usually, a falling share count happens alongside a major bust. But despite the recent rally, investors still aren’t interested in Japanese stocks. 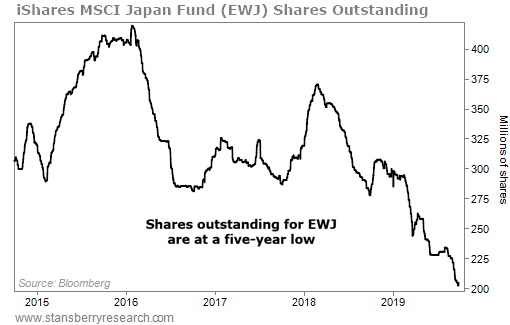 Shares outstanding for EWJ have fallen for nearly two years straight. And that negative sentiment is a huge positive for contrarian investors.

Think about it… The trend is in place, and investors are scared. It’s the perfect time to buy.

History shows this is a powerful setup. To see it, we just need to look at the handful of other times shares outstanding for EWJ were at multiyear lows. Similar cases came up in 2010, 2012, and 2016. All were great times to buy Japanese stocks…

In July 2010, shares outstanding were hitting their lowest levels since 2004. And over the next six months, Japanese stocks rallied 18%.

We saw another case in late October 2012. Investors were once again throwing in the towel on Japanese stocks. But that was a terrible time to bet against this market… EWJ went on to rally 28% over the six months, a massive short-term return.

Then, shares outstanding for EWJ hit a multiyear low in July 2016. And again, EWJ rallied, returning 9% in six months.

Today, investors are giving up on Japanese stocks… But history says you should do the exact opposite.

The trend is up, and investors are scared. That makes Japanese stocks a fantastic opportunity right now.