Splunk Inc. (Nasdaq: SPLK) – is an application software company that provides users the ability to gain real-time operational intelligence. The products allow users to investigate, monitor, analyze, and act on data. The company serves companies in numerous industries including financial services, education, healthcare, industrial, and retail. Splunk is headquartered in San Francisco and it was incorporated in 2003.

Splunk’s fundamental indicators really jump out at you. The company has seen earnings grow by a rate of 108% per year over the last three years and they jumped by 275% in the most recent quarter. Analysts expect overall earnings growth of 44% for 2020 as a whole.

Sales have also grown at an impressive clip, averaging growth of 38% per year over the last three years and increasing by 33% in the most recent quarter.

The management efficiency measurements aren’t as strong as the sales and earnings growth, but they are still in the average range.

Turning our attention to the sentiment toward Splunk we see that there are 43 analysts covering the stock at this time with 33 “buy” ratings and 10 “hold” ratings.

That puts the buy percentage at 76.7% and that is slightly above the average range, but not terribly high. This indicates slightly higher optimism toward the stock than the average stock.

The short interest ratio is currently at 4.1 and this is also above slightly above average, but this indicates slightly more pessimism than the average stock. From a contrarian viewpoint, we like stocks that have a little pessimism and strong fundamentals. 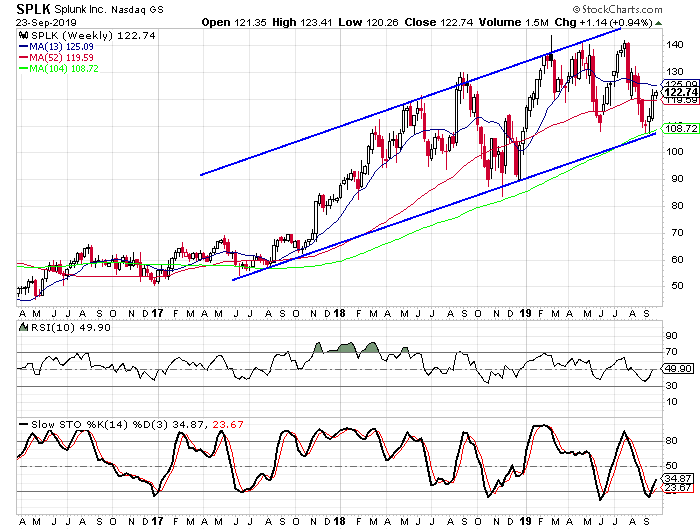 The weekly chart shows how Splunk has been moving higher for the last few years and that a trend channel has formed that connects the lows as well as the highs. The channel helps to define the various cycles within the overall trend and the stock just hit the lower rail of the channel and has since bounced a little. It is also worth noting that the lower rail of the channel is in close proximity to the 104-week moving average and that gives the stock two layers of support.

We also see that the weekly stochastic indicators recently hit oversold territory and have since reversed course and generated a bullish crossover in the last few weeks. We saw a similar development last fall and the stock rallied sharply afterwards.