We’ve only seen this setup three times since the 1980s.

The yield on long-term 30-year U.S. Treasury bonds was recently below the dividend yield of the benchmark S&P 500 Index.

That’s a crazy situation – one that shouldn’t happen. But here we are.

Yesterday, I showed you exactly why this anomaly is so unusual. And make no mistake – it’s rare. We’ve seen only two other cases… in 2008 and 2016.

Both of those occurrences turned out to be fantastic times to own stocks. And I have no doubt that when folks look back at this situation in a few years, they’ll wish they’d stepped up and bought now, too.

Stocks were getting crushed in the months leading up to it. U.S. stocks had plummeted 47% from their May peak. And investors wanted nothing to do with them.

Heck, the entire financial system was in question. Back then, the idea of buying was insanity. The housing market was crashing for the first time in history, and everyone was scared the U.S. government couldn’t handle the situation.

The consensus in late 2008 was that the beating in stocks would continue. Investors fled to safe-haven assets like bonds to stop the bleeding.

Looking back, though, buying bonds instead of stocks in November 2008 was a terrible idea. It was the exact opposite of what you should have done.

That month wasn’t quite the ultimate bottom for the stock market. It fell to slightly lower levels a few months later. But still, if you’d bought in November and held for just one year, you’d have done fantastically. Take a look… 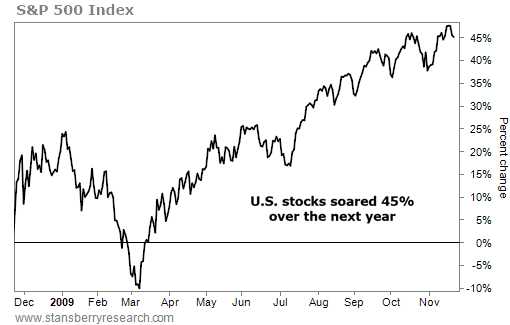 The market soared 45% in a single year. This has only happened a few times throughout history… But it’s what’s possible when this crazy anomaly appears.

Simply put, you would have done incredibly well betting against the crowd. Owning stocks – not bonds – was the right move. And the same story played out again in 2016…

After a brutal first few months in 2016, we saw another rare occurrence like the one we’re seeing today. Stocks were down 13% in just three months, ending in early February. Investors fled to bonds as a result.

But again… buying bonds instead of stocks in July 2016 was a terrible idea. If you followed the crowd, you would’ve missed an impressive move higher in stocks. 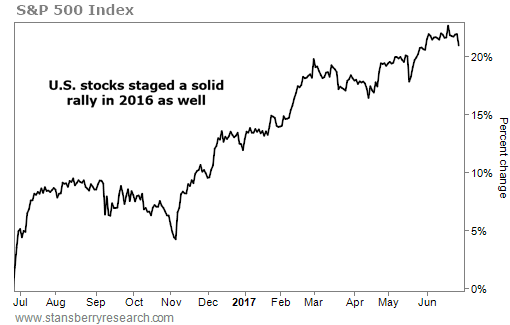 Stocks were up 21% over the next year. Today, the market is up 57% in total since then. Again, buying bonds was the wrong call in 2016… You really wanted to own stocks.

It wasn’t easy, of course. It was a scary time. And when everyone agrees that stocks are a bad bet, it’s hard to be bold and make the opposite move.

That’s true again today. We’re hovering around all-time highs in the stock market right now. But most folks are scared. The consensus view is that stocks are a bad bet… So the crowd believes moving to bonds is the smart move, as I explained yesterday.

That belief recently pushed the 30-year Treasury bond yield below the S&P 500 dividend yield for the third time in 40 years. If the past two examples are any indication, you want to own stocks… And you want to own them NOW.