The company operates in two segments: commercial truck & industrial and aftermarket & trailer. The company was founded in 1921 as ArvinMeritor, but changed its name to Meritor, Inc. in March 2011. Meritor is headquartered in Troy, Michigan.

The company has seen earnings grow by 40% per year over the last three years while sales have grown at a rate of 15% annually over that same period.

In the most recent quarterly report earnings were up 35% and sales were up 3%.

The return on equity is an incredible 99.5% while the profit margin is a little below average at 7.8%.

One of the things that got my attention the most for Meritor was the sentiment.

There are only nine analysts following the stock with two “buy” ratings and seven “hold” ratings. That puts the buy percentage at a paltry 22.2%. With the earnings growth and ROE being as high as they are, I would have expected the buy percentage to be above 70%.

The short interest ratio is also indicating that there is a lot of pessimism toward the stock. The current reading is a whopping 13.4. That is one of the highest short interest ratios I have seen in the past year. If the stock rallies like I think it will, short covering could add fuel to the rally. 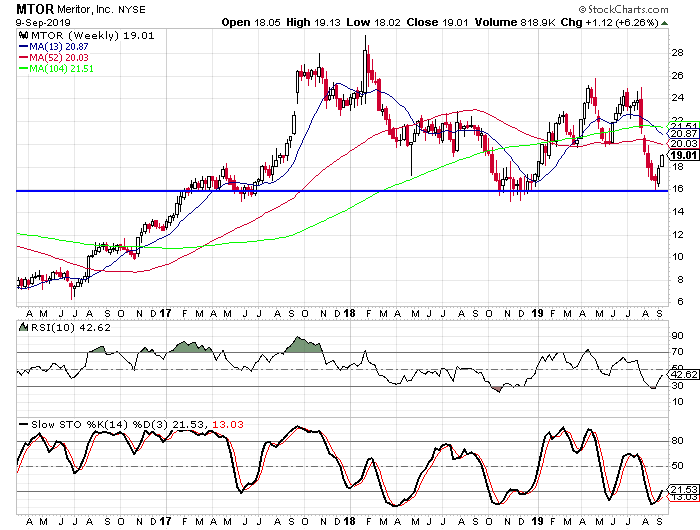 The first thing that got my attention on the chart was how the $16 level has acted as support in the past and appears to have done so again. The stock used the area as support in the fourth quarter of 2018 before a nice rally and back in mid-2017 before another rally.

We see that the overbought/oversold indicators were both in oversold territory recently and have now turned higher. The indicators made a similar move in October of last year before the stock rallied over 60%.