Norfolk Southern (NYSE: NSC) – Norfolk Southern is one of the largest rail transport companies in the United States. The company operates approximately 19,500 route miles in 22 states.

The company is headquartered in Norfolk, Virginia and was established in 1883. In addition to the rail transport operations, the also does overseas transport through various Atlantic and Gulf Coast ports.

Norfolk Southern has been able to grow its earnings by an average of 26% per year over the last three years and analysts expect the company to see overall earnings growth of 12% for 2019 as a whole.

Earnings increased by 8% in the second quarter.

Sales haven’t grown as fast as earnings, but they have been growing never the less.

The average annual growth rate for the last three years has been 6%.

Sales only increased by 1% in the second quarter.

The company’s management efficiency measurements are really good with a return on equity of 17.6% and a profit margin of 30.3%. The operating margin is at 36.1%.

The sentiment toward Norfolk Southern was one of the major attractions for me. There are 27 analysts following the company and only eight of them have the stock rated as a “buy”. There are 17 “hold” ratings and two “sell” ratings. This means the overall buy percentage is only 29.6% and that is well below the average buy percentage which falls in the 65% to 75% range.

The short interest ratio for the stock is only 2.0 and that is a little on the low side. The number of shares sold short did increase in the first half of August, but the average trading volume increased as well. 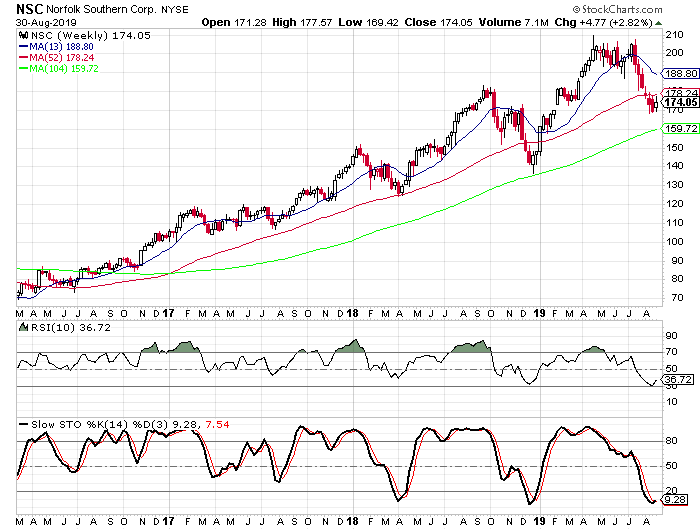 The weekly chart caught my eye as much as the sentiment did. We see that the weekly stochastic readings reached oversold territory in the past month, but they made a bullish crossover this past week. Looking back at the last two instances where the indicators were in oversold territory and made a bullish crossover, the stock performed extremely well in the five months that followed.