Last year, the company reported funds from operations (FFO) per share of $1.48. FFO is similar to cash flow, and it is the metric used by real estate companies.

Brookfield Property Partners paid out $1.26 per share in distributions in 2018. (Partnerships pay distributions rather than dividends.)

Even at $1.44, the company can afford its distribution, and if it meets estimates in 2020, the declining FFO per share this year will be all but forgotten.

Brookfield Property Partners has raised its dividend every year since it began paying one in 2013. 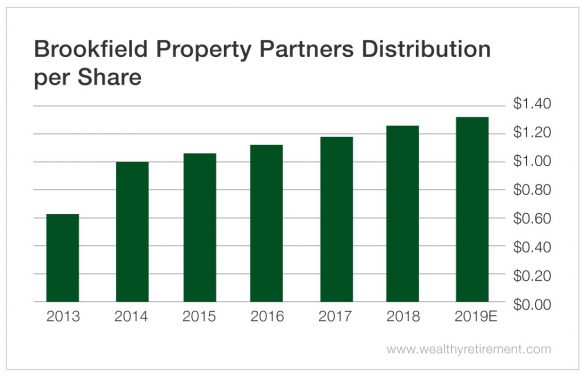 Like a college kid with a gambling problem, Brookfield Property Partners knows that having a parent with deep pockets doesn’t hurt.

If the partnership ever needs to raise money in order to pay the distribution or fund new income-producing investments, it likely will be able to using the Brookfield name.

According to SafetyNet Pro, the only thing against Brookfield Property Partners is this year’s slight decline in FFO.

But if next year FFO is still expected to grow, the stock will achieve the highest rating available, which is impressive for a 7% yield.

In the meantime, the stock is considered low-risk for a dividend cut.