Fox Factory Holdings (Nasdaq: FOXF) – Fox Factory Holdings is a unique company that designs, engineers, manufactures, and markets suspension products for mountain bikes, road bikes, all-terrain vehicles, and commercial trucks. The company is based in Braselton, Georgia and was incorporated in 2007.

Fox has seen earnings grow by 31% per year over the last three years and they increased by 21% in the most recent earnings report. Analysts expect earnings to grow by 18% for the year as a whole.

Revenue has also been increasing at a nice pace.

Over the last three years the average annual growth rate has been 22% and sales were up 23% in the most recent quarter.

The management efficiency measurements are also impressive with a return on equity of 31.2% and a profit margin of 17%.

One of the most surprising things about Fox Factory Holdings is the sentiment toward the stock, given its strong earnings and sales growth.

There are nine analysts following the stock with three “buy” ratings and six “hold” ratings.

Short sellers are also very bearish toward Fox with the short interest ratio at 7.72. The ratio has been bouncing around a little in the last few months, but the overall trend has it moving higher since the first of the year. 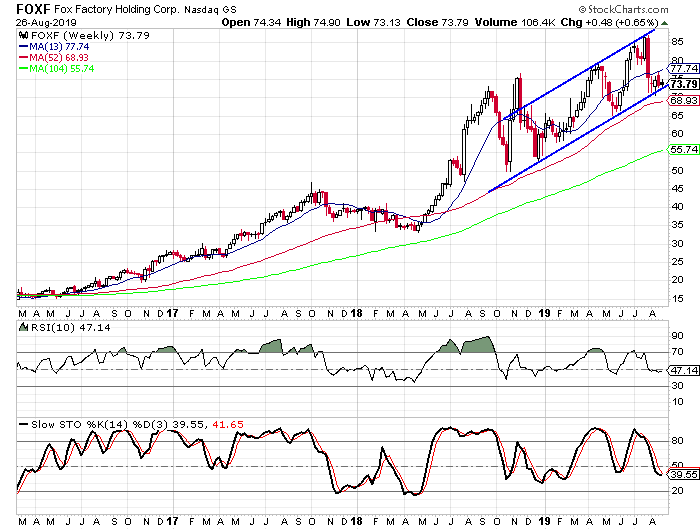 We see on the weekly chart that the stock has been trending higher for several years now with a trend channel forming over the past year. The stock is just above the lower rail of the channel right now and that is after four straight weeks of losses for the overall market. The 52-week moving average is just below the lower rail of the channel and should act as a secondary layer of support.

The weekly overbought/oversold indicators are in the same area that they were at in May when the stock last hit the lower rail of the channel. The stock jumped over 33% in the two months that followed that period.