We couldn’t ignore it if we tried…

The developed world’s three largest central banks have all suggested that monetary stimulus is coming.

The U.S. Federal Reserve made the first move. It decided to cut interest rates two weeks ago. And both the Bank of Japan and the European Central Bank have been talking about stimulus, too.

We’re not news junkies. Most media reports on the markets just distract investors and traders from more important themes. But when the world’s most influential central banks all plan to make major policy changes, we have to listen…

Today, we’ll share our thoughts on all that’s happening, especially as it relates to stocks and gold.

You see, these major central-bank policy changes don’t happen often. But when they do, they affect the markets in a big way.

Is all this good for stocks? In the short term, yes… Low interest rates encourage borrowing and investing.

Longer term, though, we’re not so sure. Central banks were able to prop up the markets effectively after the 2008 financial crisis. But now, we’re more than a decade into a bull market.

Interest rates are already low. And stock valuations are much higher. So while a crisis isn’t imminent, central banks are unlikely to add much more fuel to this bull market.

Precious metals, though, are another story…

Gold and silver have not been in a bull market for 10 years. They’ve been either falling or stuck in the gutter since 2011. And lower interest rates usually support higher precious metal prices. (When interest rates are low, folks are less worried about not earning interest on gold and silver.)

Governments around the world are standing at the line, ready to get back into the race to devalue their currencies. So once again, gold and silver look attractive as a form of savings compared with paper currencies.

Earlier this year, gold was near a major turning point. For years, it had “hit its head” on a strong resistance level (the blue line in the chart below) and turned lower. But each time it pulled back, the dips were shallower and shallower. That often means a big move is on the way.

Finally, that move started. In the chart below, you can see that gold has spiked higher. It’s trading above $1,500 per ounce. And it has officially broken above its key resistance level… 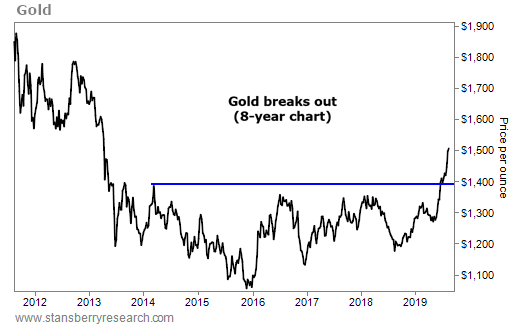 This is a major bullish development for gold and gold stocks. Gold has been trading in a “holding pattern” for six years. It has chopped back and forth in a big sideways range. But this breakout confirms that the bulls are now in control.

If you’ve been waiting for the right time to buy physical gold and silver, this could be the sign you were looking for.

So if you don’t hold at least 5% to 10% of your wealth in precious metals, start buying today. And if you already own some gold, just be patient. We could see better prices in the near future, and you may be able to give yourself a more favorable reward-to-risk ratio.

The world’s biggest central banks are shifting gears… And investors who’ve been bullish on stocks and precious metals are reaping the rewards.

For stocks, we don’t know how long these rewards will last. Maybe they’ll continue for a few more months… Or maybe we still have a year or two left in this bull market.

With precious metals, though, our outlook is clear. The central banks’ change in tone is a major bullish sign. And so is the recent price action.

This is a market you want to be in. Trade accordingly.