You wouldn’t expect this…

Stocks are still near all-time highs. Unemployment is at record lows. And the economy is doing well, at least in the near term.

Yet, investment bank Morgan Stanley just made a huge call against stocks. Last month, it downgraded its global stock holdings to “underweight.”

That might not seem like a big deal. But in the world of Wall Street research, underweight basically means “get the heck out!”

“The most straightforward reason for the shift is simple – we project poor returns.”

That’s straight from Andrew Sheets. He’s the investment bank’s chief cross-asset strategist. He’s the guy that oversees Morgan Stanley’s global investment strategies… And he thinks returns over the next 12 months will stink.

Today, I’ll share two reasons why he could be right – and the asset you need to own just in case.

One sure way to send stocks tumbling is an increase in uncertainty. Investors hate not knowing the outcome of a looming event.

And if you want to see a major point of global uncertainty, look no further than Iran…

Iran is one of the key macro uncertainties pressing on the minds of investors today. The country has the means to build a nuclear bomb. But it hasn’t done it, yet.

In 2015, some of the most powerful nations in the world got together to keep it that way. The U.S., U.K., France, and Germany all worked on it. Even Russia and China joined in. And they came up with an incentive package to end all incentive packages.

The basic idea was, “Iran agrees not to build a bomb, and we all agree to do things that are good for Iran’s economy.” Most of all, that meant lifting sanctions on Iran that were in place at the time.

Well, President Trump decided he didn’t like the terms of the deal. So he pulled the U.S. out of it last year.

Now, Iran and the other five nations are trying to figure out what to do. And as you’d imagine, Iran is angry. Not only did the U.S. pull out of the deal, it imposed new sanctions. The biggest sanctions targeted Iran’s oil sector, which means that it’s now very hard for Iran to sell its oil.

Iran responded by breaking commitments it made in the deal. It’s moving, slowly, toward gathering enough materials to build a nuclear bomb… And it’s taken steps in recent weeks to put pressure on the West and its partners.

This alone would be all the uncertainty needed to put stocks on shaky ground. But there’s more…

U.S. and China trade relations are also causing global turmoil. The two countries have now been locked in economic battle for more than a year.

For a while, the trade war looked like it was cooling off. President Trump and China’s President Xi Jinping had negotiated a truce. But now, the truce is off. And the U.S. and China are looking for ways to inflict damage on each other.

It’s a tough spot for investors to be in. But it’s great news for another asset… gold.

This precious metal loves uncertainty. And when you consider what’s going on in the world right now, the chart below makes a lot of sense. Take a look… 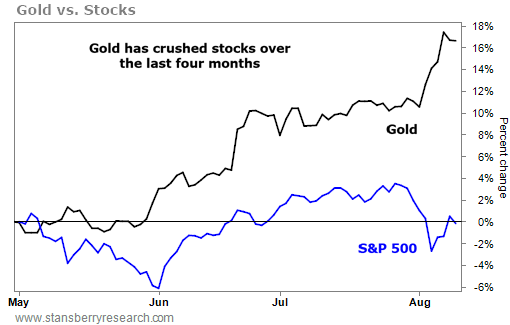 Gold has beaten the pants off the S&P 500 Index over the last four months. The metal is up 17% as of Friday’s close… But after a recent tumble, U.S. stocks are down slightly.

This outperformance is even more impressive considering most of the move in gold happened while the S&P 500 made new highs.

There’s a lot of uncertainty out there. And gold investing has long been considered a kind of “insurance” against uncertainty.

Now, imagine what would happen if something else goes wrong with Iran? Or China? It wouldn’t be good for stocks, no question about that. But gold would almost certainly benefit.

I’m not saying to sell your stocks today, of course. The trend is still up. And until that changes, it’s foolish to step aside.

Still, gold offers certainty in an uncertain world. And it’s been soaring lately as a result. So if you’re worried about where stocks are headed, it might be time to add some gold to your portfolio.