One of the most important questions that investors need to ask is how their portfolios will fare during times of crisis. When the S&P 500 Index takes a dive, will their investments dive alongside it? Or will hold up or even rally?

My approach in Profitable Investing is to present an allocation to both stocks and fixed income which provides growth and income along with shock absorbers to steady the gyrations of the general stock market.

This comes with lots of income from my recommended dividend stocks, as well as the heavy income from coupons and interest paid by bonds, preferred stocks and related funds.

But I can offer further perspective on investments that work better during general stock market sell-offs. It only takes a few bits of financial history to see what worked when the S&P 500 Index wasn’t your friend.

How to Invest in a Crisis

Take for example its recent move from its high on July 26 through Thursday. The S&P 500 Index dropped by 4.7% in price, and yet there were plenty of investments which were not just holding up, but rallying.

I’ll start with real estate investment trusts (REITs). REITs continue to be a go-to investment sector during many of the challenging market times over last year and through 2019, including the drop from July 26. The Bloomberg US REIT Index was up 1.4% during the recent plunge.

REITs continue to fare well because of their solid, real assets which generate dependable revenue flows which in turn fuels ample dividend income. In addition, most U.S. REITs are either totally focused on the U.S. market or are mostly focused on the U.S. property market. This insulated them from the global economic malaise as well as trade tensions between the U.S. and China.

Next up is the U.S. utilities market. Utilities as tracked by the S&P Utilities Index rallied by 0.34%. That’s not much, but it beats losing money. Utilities continue to benefit from the dependability of solid regulated businesses which provide set profit margins. And they also benefit from additional growth and income from unregulated operations, providing ancillary operations from power generation and transmission to other larger-scale essential services.

They therefore have dependable income for better dividends than for the general stock market with the addition of growth prospects from the continued improvement in the general US economy.

Then there’s the bond market. I’ve always been a fan of bonds. That was one of my focuses in my professional life. U.S. bonds continue to benefit from low and falling inflation, rising demand, limited new supply and improving credit conditions from many issuers of bonds. The Bloomberg Barclays Aggregate US Bond Market Index rallied for the period by 1.8% as traders got further on board as stocks were sinking.

And of course, U.S. bonds are ever more attractive in their yield as more and more of the major global bond markets have ever deepening negative yields.

And last up in my suggested arsenal of crisis investments is gold. But just owning gold isn’t as good as my preferred way of owning gold which pays a dividend. Gold of course did rally for the same time period. But gold costs money to buy and store it. Even the SPDR Gold Shares ETF (NYSEARCA:GLD) costs 40 basis points (0.4%) per year to deal with its underlying assets. But for me, I like the idea of just buying the proceeds of ongoing gold production. This is called gold streaming. And one of the best in the business is Franco-Nevada (NYSE:FNV).

This Canadian-based company has shares that easily trade on the U.S. exchanges. It doesn’t mine gold, it buys and owns royalty and other interests in gold and other mineral production which streams income to the company. It then pays out part of the proceeds in the form of a dividend which currently yields 1.06%.

And for the trailing year, Franco-Nevada outperformed GLD, with 33.1% in total return against 22.8%. And this isn’t just a recent development, as the company has generated a return over the trailing five years which is better than GLD by a margin of 6.22 times better.

Now, many REITs did much better than the overall U.S. REITs market. including one of my favorites — WP Carey (NYSE:WPC) which generated a positive return for the fourth quarter by 3.21%. And during the plunge of Aug. 5 — WPC held and rallied by 0.23% while the S&P 500 fell by 2.97%.

For the general REIT market — the easy-peasy way to gain crisis protection can by found in the Vanguard Real Estate ETF (NYSEARCA:VNQ). This provides synthetic exposure to the US REIT market at a ultra-low cost.

And for U.S. utilities, Vanguard again is a good go-to source. Its Vanguard Utilities ETF (NYSEARCA:VPU) which provides good synthetic exposure to U.S. utilities at a low cost.

For gold, I’ve already made part of my case for Franco-Nevada as the best gold play in the U.S. market.

And for U.S. bonds I have another specific investment recommendation which subscribers of Profitable Investing will recognize. US bonds are performing very well this year with inflation low and falling with the core Personal Consumption Expenditure Index (PCE) falling over the trailing year to a current 1.60% – well below the Federal Reserve Bank Open Market Committee (FOMC) target above 2%. 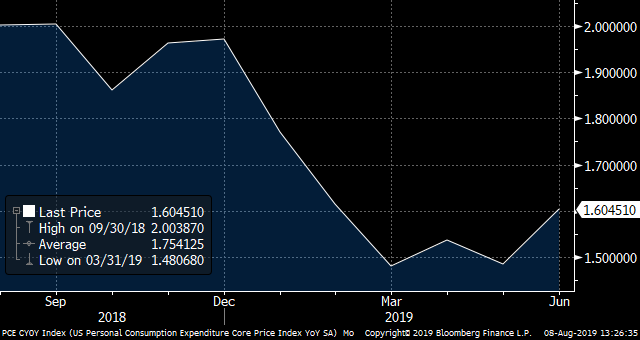 U.S. bonds continue to perform well with the lower inflation and improving supply-and-demand conditions noted above. And when looking at the rest of the major global bond markets, the U.S. yields are still very much in the attractive positive range while the amount of negative yielding bonds keeps soaring in amount as non-U.S. bond investors are so desperate that they are effectively paying to own bonds. The total amount as tracked by Bloomberg & Barclays is now at $15.62 trillion. 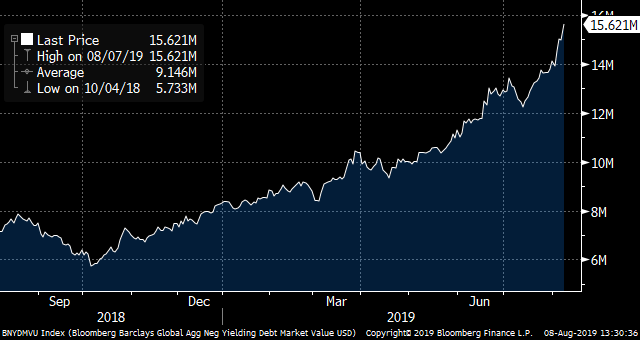 Now, U.S. bonds have been good performers during crisis and prosperity this year with the overall return as tracked by Bloomberg Barclays at 8%. But I continue to advocate buying corporate higher-yielding bonds which have turned in a better return of 9.4% year to date.

And one of the best means to capitalize on U.S. corporate higher-yielding bonds is to buy the BlackRock Credit Allocation Income Trust (NYSE:BTZ). This closed end fund yields 6% and yet trades at a whopping discount to its net asset value by 9.1%. And year to date, it has generated a return of 23.9%.