“Mistakes, I’ve made a few” goes the old Frank Sinatra standard, and all of us have made plenty of them. Some errors, though, can be quite costly and are best avoided if possible.

For example, it’s best to avoid making mistakes with your Social Security, lest you end up collecting less money from the program than you’re entitled to.

Sadly, though, it appears 96% of Americans are making a meaningful mistake regarding Social Security — by starting to collect their benefits too early.

One of the first things you need to know in order to make smart Social Security decisions is your “full retirement age.”

That’s the age at which you can start collecting your full Social Security benefits. It’s somewhere between 65 and 67, depending on when you were born: 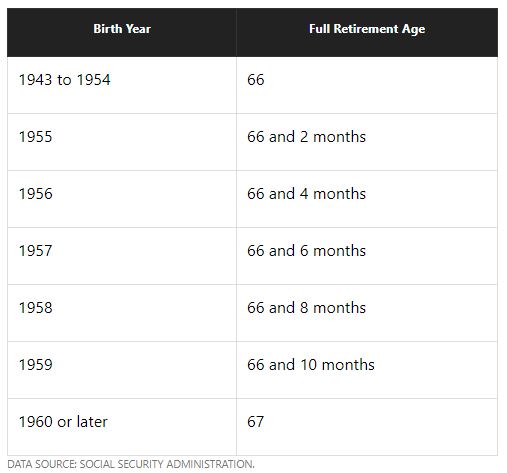 Next, know that you can start collecting your benefits as early as age 62 and as late as age 70. For every year beyond your full retirement age that you delay starting to receive benefits, you’ll increase the value of your benefits by about 8% — until you reach age 70, when this bonus for waiting maxes out. So delaying from age 67 to 70 can make your benefit checks about 24% fatter.

So when do people generally start collecting their Social Security benefits? Check out the table below: 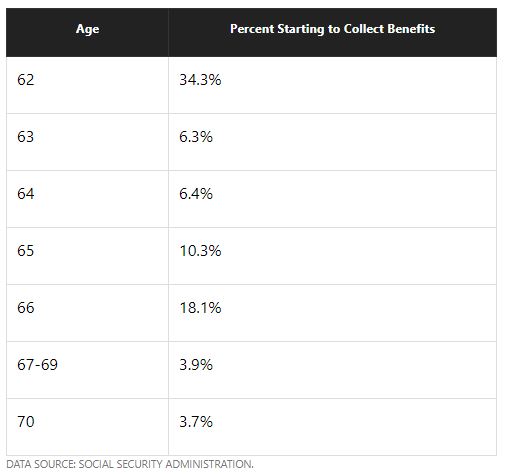 One-third of people start collecting as soon as they can, with very few waiting until the last year or two. Only 3.7% start collecting at age 70, meaning 96.3% start before then. There are good reasons to start early, but plenty of experts agree the best age to start collecting is age 70. That means that a heck of a lot of retirees are making a mistake.

Let’s take a look at why you might start collecting early — or late.

There are solid reasons to start collecting early. For example, you might simply need to. Many people end up retiring earlier than planned due to a job loss or health setback. If that happens to you, you might need that income as soon as possible.

On the other hand, you may have saved aggressively for a long time, planning to retire early. If so, the income from Social Security, along with your savings, may be enough to support your early retirement. This makes particularly good sense if you expect to live a shorter-than-average life, perhaps because your family tends to not live that long or you’re in poor health.

Another consideration is this: It’s a wash, in many ways. The system is designed so that for those who live an average-length life, it doesn’t matter when you start collecting. Over your lifetime, you’ll receive about the same total benefits.

Why start collecting Social Security at 70?

Why would age 70 be a better age to start collecting benefits? There are a handful of good reasons, including:

If those reasons aren’t enough, here are a few more, via a report from United Income titled The Retirement Solution Hiding in Plain Sight. Its researchers used data from the University of Michigan’s Health and Retirement Study to run lots of wealth and income simulations on roughly 2,000 households in order to identify the best age for claiming Social Security benefits. They arrived at age 70 and also offered these findings:

Reading up on Social Security may not sound enticing, but the more you know, the savvier decisions you’ll make, and that can lead to increased Social Security benefits and many thousands of dollars more in retirement.