Baozun (Nasdaq: BZUN) – Baozun is a provider of e-commerce solutions in China, offering clients IT infrastructure setup and integration, online store design and setup, and marketing campaigns. The company lists a number of American companies among its clients including Nike, Starbucks, Coach, and Fiat Chrysler. Baozun is headquartered in Shanghai and was founded in 2007.

The company’s earnings have grown at a rate of 90% per year over the last three years and they grew by 44% in the most recent quarterly report. The company is scheduled to report again on August 12.

Sales have also increased at an impressive rate, growing by 31% in the most recent quarter.

Over the last three years sales have increased at an average of 25% per year.

Baozun’s management efficiency measurements are as impressive as its earnings and sales growth, but they are okay.

The sentiment toward Baozun is mixed.

There are only 12 analysts following the stock, but 10 of the 12 have the stock rated as a “buy”. The other two have the stock rated as a “hold”. The overall buy percentage is a little high, but there are only 12 analysts so that is easier to overlook. The short interest ratio shows considerably more bearish sentiment with a reading of 10.63 currently. That is the highest reading of the past year. 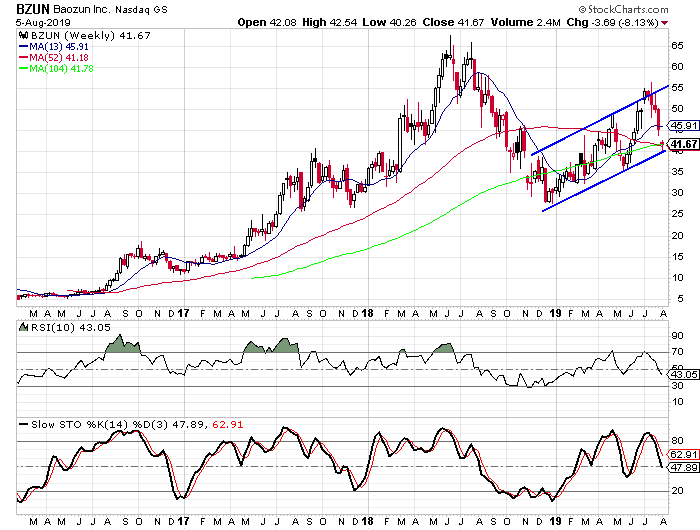 We see how Baozun has been trending higher since the low in December and a trend channel has formed. The lower rail connects the lows from December and May. The selling from last week and on Monday have brought the stock down to the vicinity of the lower rail, but it is also hitting potential support at its 52-week and 104-week moving averages.