The market has been on fire this year and is still knocking on the door of new record highs. There’s lots to like.

With August upon us, not only is the overbought market vulnerable to profit-taking, the calendar is working against stocks as well.

One average, the market loses ground in the months of August and September.

Given the gain seen since the end of 2018, it’s not a stretch to think the market could suffer a setback in the very near future.

That’s not necessarily the case for all stocks though.

A handful of names appear to be gearing up for forward progress here.

To that end, here’s a rundown of the best stocks to buy for August, and likely September.

Notice that in most cases there’s not only a strong fundamentals-based argument, but a compelling technical (chart-based) situation as well.

A stock pick needs every edge it can get in what will likely be a lethargic environment. 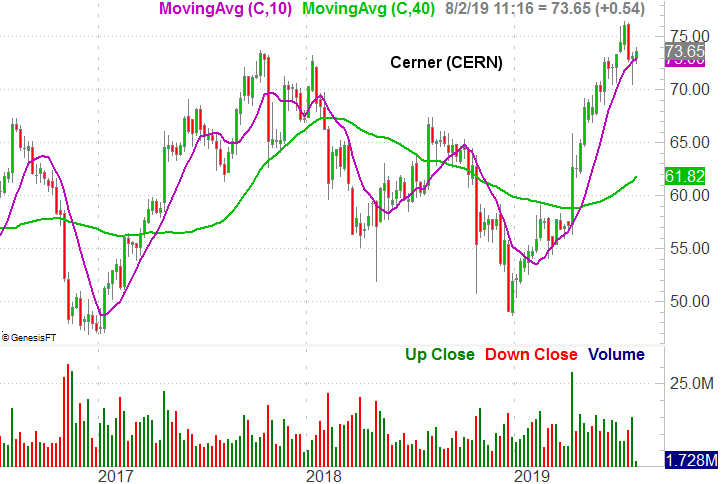 Headed into its second-quarter earnings report posted a week ago, shares of medical IT company Cerner (NASDAQ:CERN) were losing ground. It’s understandable. CERN stock was well up for the year, and there was little need to take such a risk with so much profit on the table.

As it turns out, it didn’t really matter. Revenue was more or less where it was expected to be, and though they fell, profits topped expectations. The weakness headed into the earnings release danced with the 50-day moving average line for a bit, and since then the stock has made its way back into bullish mode.

Though Cerner isn’t a red-hot growth machine, with the top line only expected to improve 6.7% this year and 6.4% next year, investors are starting to appreciate the consistent growth the company offers. 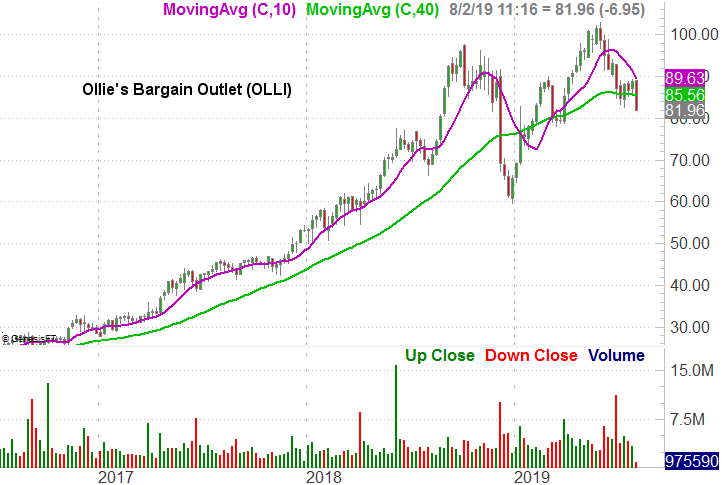 Contrary to popular belief, not all retailing is dead. It’s only certain kinds of retailing that are dead. Bargains are still, as always, en vogue.

That’s a key part of the reason Ollie’s Bargain Outlet (NASDAQ:OLLI) is one of the best stocks to buy in any kind of economic environment. Though it won’t be able to sustain this kind of growth pace forever, this year’s revenue growth rate of nearly 17% should still be better than 15% next year despite the big 2019 expansion.

The big (and profitable) irony is that Ollie’s is taking direct advantage of the plight of more mainstream retailers. The bulk of its merchandise comes from factory returns, overstocks, bankruptcies, bulk liquidations and the like.

The stock has been peeling back since late May, but has a history of recovering around the 200-day moving average line, where it is now. 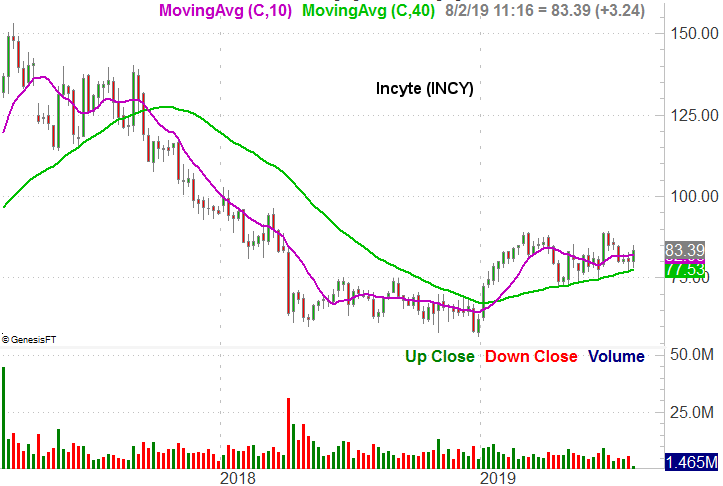 Incyte (NASDAQ:INCY) had a rough 2017, and though 2018 wasn’t quite as tough on shareholders, it was hardly a banner year.

This year, however, has been notably different. This year, not only are gains being logged again, a new paradigm has been established. INCY stock is finding repeated support around the 200-day moving average line, prodding the stock to higher lows and higher highs … and pushing it out of the 2017/2018 downtrend.

It’s got everything to do with results, recent and projected. On Tuesday, for instance, increased adoption of its one U.S.-approved drug, Jakafi, used to treat a rare blood condition called polycythemia, drove a small increase in sales, but a near-tripling of per-share profits. It upped the lower end of 2019’s revenue guidance range as well.

The stock could get a few weeks’ worth of mileage from the news, particularly now that the entire biopharma group appears to be on the mend. 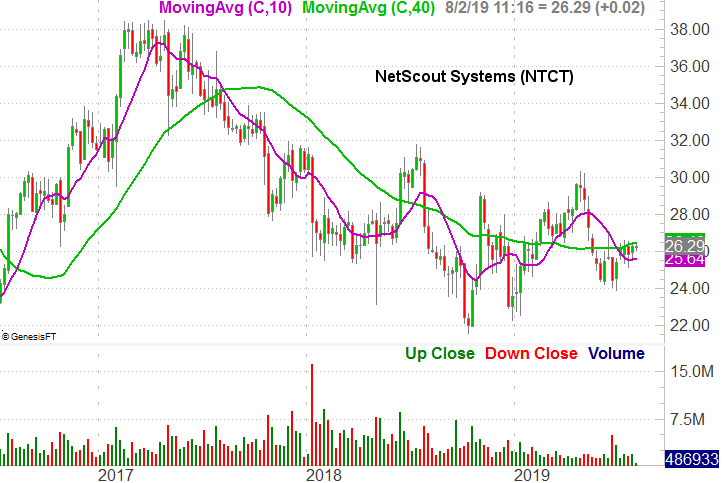 NetScout Systems (NASDAQ:NTCT) helps companies better manage their information technology networks. From streamlined performance of data centers to cybersecurity to the implementation of 5G connections, NetScout has much to offer.

It also has much to offer investors again after a sizeable pullback in 2017 and 2018. NTCT shares have logged a string of higher lows since a major bottom was made in October of last year, and if one looks closely, they’ll see the pivotal 200-day moving average line plotted in green is now sloped upward. It’s a sign that the bigger trend has turned bullish, even if NetScout Systems stock is down from its April high.

It may have something to do with this year’s expected earnings of $1.41 per share projected to grow to $1.68 next year. 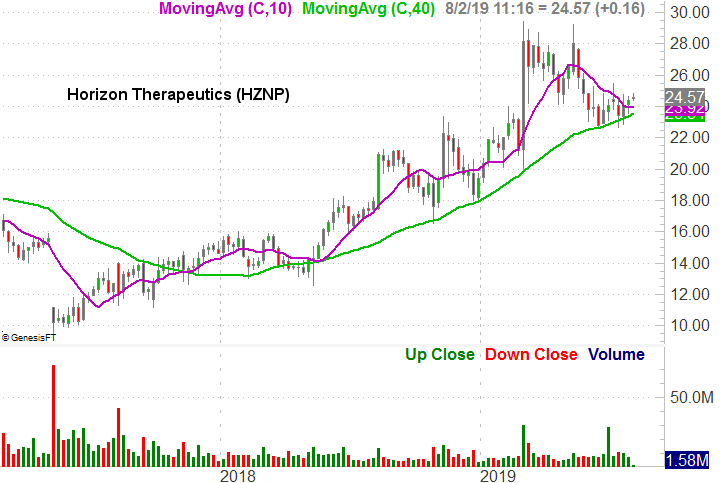 Horizon Therapeutics (NASDAQ:HZNP) is another name that’s finding repeated support at its 200-day moving average line, though it has been finding it for much longer than most. The end result is an impressive though well-established uptrend that extends all the way back to 2017, and shows no sign of stopping. The pullback from earlier this year appears to be a prime buying opportunity, as HZNP has already made the turn.

It has got everything to do with the company’s portfolio. With nine different approved drugs on the market spanning several different ailments, Horizon Therapeutics can easily buff out any sales-related turbulence.

Better still, with some new potential approvals on the radar, next year’s expected sales growth of 8% is projected to drive per-share earnings from $1.73 this year to $2 in 2020. 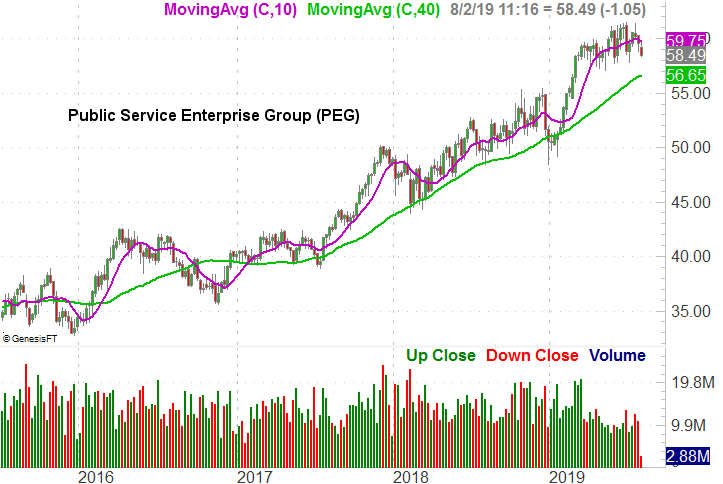 There’s another reason a dividend-oriented Public Service Enterprise Group could be one of the best stocks to buy at this point in time. With interest rates poised to move lower, PEG’s healthy dividend becomes considerably more compelling.

Bickerton goes on to say “One sector that you can [already] see this in is utility stocks. The Utilities Select Sector SPDR ETF (NYSEARCA:XLU) has had strong relative performance lately as we approach July’s Fed meeting in anticipation of a cut.” 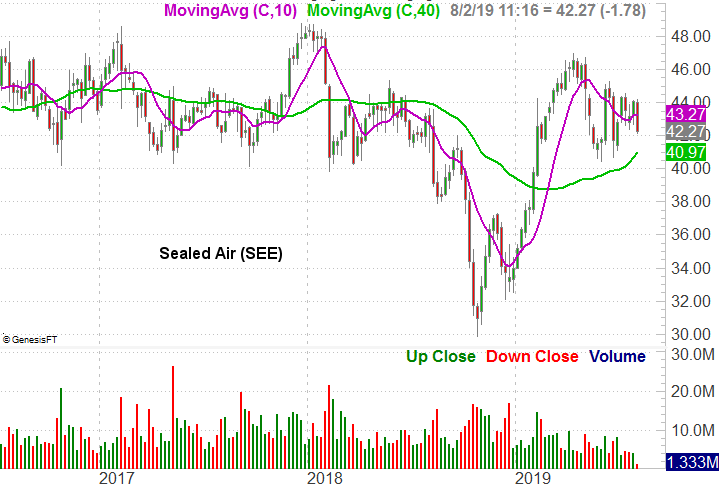 Sealed Air (NYSE:SEE) shares are seemingly fighting a losing battle. Though the stock has firmly rebounded from its late-2018 low, the past few weeks haven’t been thrilling.

It’s neither results nor value that’s holding the stock back, however. Though not a bulldozer in terms of top or bottom line progress, this year’s single-digit revenue growth of 1.5% is still expected to be enough to let the reconquering Sealed Air improve last year’s bottom line of $2.50 per share reach $2.73 this year, and grow to earnings of $3.03 per share next year on only slightly better revenue growth.

The underestimated X-factor: The U.S. economy is holding up better than expected in the wake of a tariff war, with the initial look at last quarter’s GDP suggesting it grew at 2.1%. If lower interest rates stimulate an already-solid economy and the tariff war cools off, Sealed Air is well positioned. 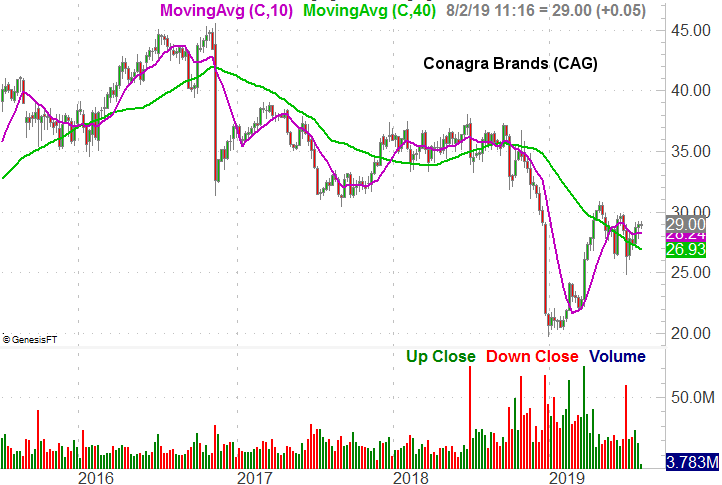 The entire packaged food industry has faced a tough headwind for a couple of years now. Conagra Brands (NYSE:CAG) has been no exception to that trend.

The industry, and Conagra, both appear to be on the mend after a mostly capitulatory plunge logged late last year.

That rebound from CAG stock is the result of a lengthy and sometimes difficult reconfiguration of the company. Conagra has acquired Pinnacle Foods, closed plants, bought Angie’s Artisan Treat and spun off Lamb Weston Holdings (NYSE:LW) in an effort to optimize its business in just the past few years. Though there were times it seemed none of the maneuvers would make their intended impact, next year’s projected earnings growth says the light at the end of the tunnel has finally appeared. 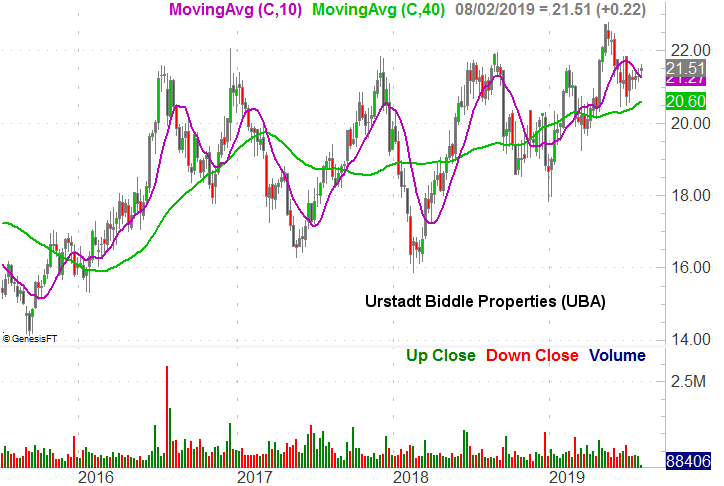 There are plenty of well-known REITs. Urstadt Biddle Properties (NYSE:UBA) isn’t one of them. That doesn’t mean the name isn’t an income-producing real estate play worth owning though.

Urstadt Biddle owns and operates strip malls and shopping centers, but insists on an important nuance. It likes for its properties to be anchored by a grocery store, and located in suburban areas of New York.

It’s a formula that works. Urstadt Biddle Properties has managed to drive reliable revenue growth for years, even in the midst of the so-called retail apocalypse. The dividend has grown steadily for the past 20 years as well, setting the stage for an above-average yield of 5.1% right now. The REITs renewed bigger-picture advance says investors have taken notice.

Lower interest rates will only make it easier for Urstadt Biddle to fund new projects. 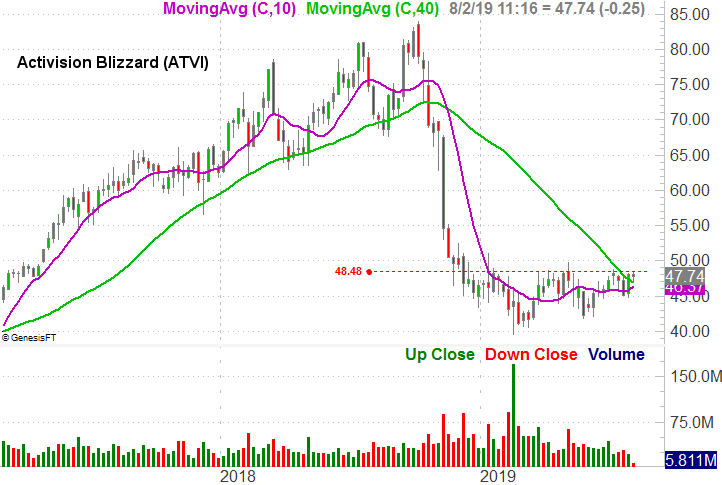 Finally, add Activision Blizzard (NASDAQ:ATVI) to your list of best stocks to buy in August.

It won’t be a comfortable prospect for some investors, who know all too well that ATVI was up-ended last year. Unprepared for an indie game like Fortnite and further weighed down by a general lack of interest in its titles headed into the all-important fourth quarter, some investors left ATVI stock for dead.

That may have been a mistake though. Since early this year, Activision Blizzard has left behind a string of higher lows as part of an effort to break above a well-established technical ceiling around $48.50.

The company’s forced regrouping is also expected to start making an impact, for the better, come next year. Analysts are calling for 10% sales growth in 2020, which in turn is expected to push this year’s expected per-share earnings of $2.15 up to $2.54. As that outlook becomes more realistic, ATVI grows more bullish, setting the stage for a breakout thrust.

There’s Still So Much Upside Ahead for This Stock

Get Ahead With ‘Asymmetric Investments’

Upgrades and Downgrades for Monday, 10/25