Saving enough money to retire is crucial to your future financial stability.

Your retirement investment accounts should be a major source of income in your golden years, especially as Social Security benefits alone are designed only to replace about 40% of pre-retirement income.

Unfortunately, figuring out how much to actually save for retirement isn’t so easy — which is why more than half of Americans don’t know how much money they’ll need to retire comfortably.

This lack of knowledge is just one reason why the chart below is so important — and is perhaps the most important retirement chart you’ll ever see.

The most important retirement chart you’ll ever see

While some argue you should withdraw less than 4%, this can give you a baseline idea of how much income nest eggs of different sizes would produce.

The chart also shows about how much you’d need to save to accumulate the retirement account balance necessary to produce each income amount by the age of 65. It’s based on the assumptions you’ll save the same amount each year, and that you’ll earn a 7% return on investment. 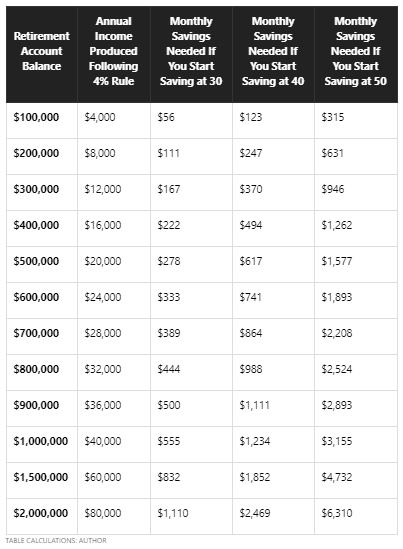 Why is this chart so important?

There are a few reasons why this chart is so important. First and foremost, it can help you set a realistic savings goal. If you estimate that you’ll want $60,000 of annual income from your savings in retirement, you know you’ll need to save between $832 and $4,732 per month if you start saving anywhere between the age of 30 and the age of 50. This can help you to get at least a rough idea of how much you should save for retirement — although you should do the calculations to figure out exactly how much you’ll need.

It also demonstrates that even a big nest egg is likely to produce only a small amount of income. If you have $500,000 saved for retirement, that would produce just $20,000 in annual income if you follow the 4% rule.

Likewise, starting to save $1,110 per month at the age of 50 would leave you less than $400,000 for retirement, while the same amount set aside starting from age 30 would give you around $2 million. Obviously, this chart should strongly encourage you to save ASAP because it’s a lot easier to save smaller amounts for a longer time than to come up with huge sums of money later in life.

As the chart makes clear, you can’t afford to wait to save for your future if you want your retirement investments to produce a reasonable amount of income. Start investing as much as you can for retirement today and hopefully you can hit that $1 million or even $2 million mark necessary to have a hefty income during your senior years and enjoy retirement to the fullest.

3 of the Best Tech Stocks to Buy on the Rebound

This 9% Yield Will Get Cut (and That’s Okay)

Upgrades and Downgrades for Tuesday, 9/22