Horizon Therapeutics Public (Nasdaq: HZNP) – Horizon Therapeutics is a biopharmaceutical company based in Dublin, Ireland. The company was founded in 2005. The company focuses on developing and marketing medicines that treat rare and rheumatic diseases. The diseases that the company’s drugs treat at this time include gout, rheumatoid arthritis, and osteoarthritis.

Horizon has really strong management efficiency measurements with a return on equity of 30.6% and a profit margin of 29.4%.

Earnings have been a little inconsistent in recent years with the average performance showing an earnings decline of 9% per year over the last three years.

The company’s sales have been growing at a rate of 11% per year over the last three years and they jumped 25% in the first quarter compared to a year earlier. 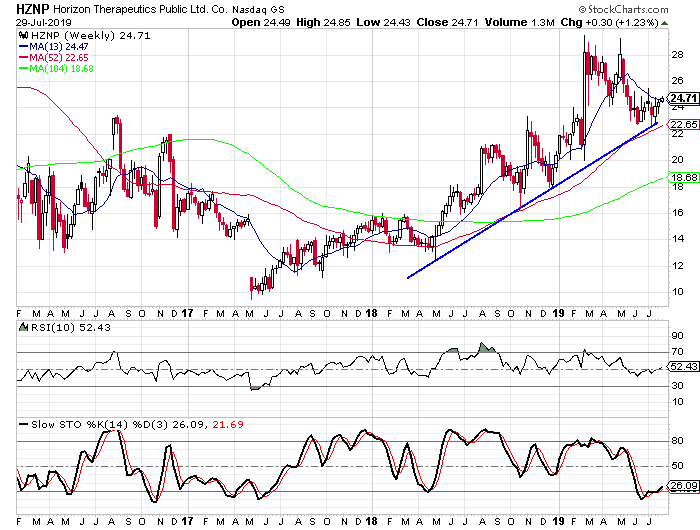 The weekly chart is a big driver behind this recommendation. We see that the stock has been trending higher over the last few years and a trend line has formed that connects the lows from the past 15 months or so. The stock is sitting just above that trend line after hitting in each of the last few weeks. The weekly stochastic readings are right at oversold territory and look as if they are ready to start moving higher.