CDK Global (Nasdaq: CDK) – CDK Global is a software company with a specific focus on providing technology solutions to the automotive retail industry. The company’s segments include Retail Solutions North America, Advertising North America, and CDK International. The company was founded in 2014 and is headquartered in Hoffman Estates, Illinois.

I checked three different sources for a return on equity figure and none of them showed an ROE.

The company has been making money, so I’m not sure why there wasn’t a figure on Yahoo Finance, Investor’s Business Daily, or the Wall Street Journal.

Regardless, the other management efficiency measurements are very good.

It should also be noted that the company doesn’t have any long-term debt.

The company hasn’t set the date for its next earnings announcement, but based on the last release, earnings should be released within the next two weeks.

The sentiment for CDK isn’t overly pessimistic, but more a posture of indifference or its flying under the radar. There are only five analysts following the stock at this time with three “buy” ratings and two “hold” ratings. The short interest ratio is at 2.9 currently and it has been trending higher. The ratio was below the 2.0 mark back in January and February. 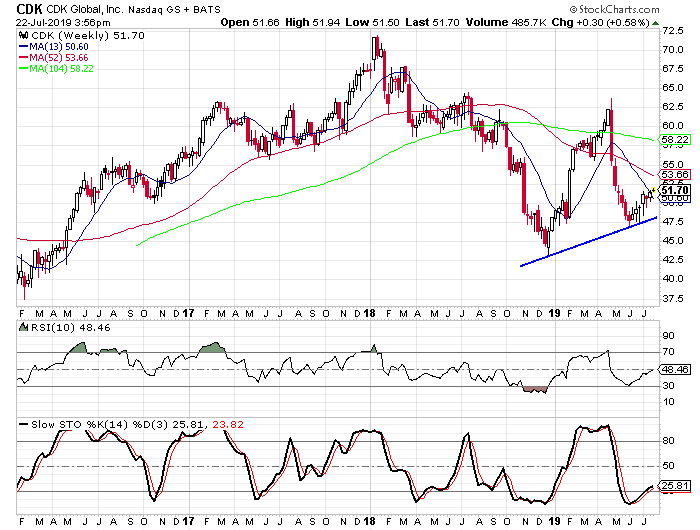 The weekly chart for CDK shows that the stock fell throughout 2018 and hit a low of $43.16 in December before jumping to a high of $62.26 in April. The stock then dropped for six straight weeks before it started to reverse the trend. The low in May was considerably higher than the December low and I look for the trend line that connects those two lows to act as support now.