The price of gold has been soaring. It jumped 7.3% over a two-week stretch last month. And the metal is up double digits over the last two months.

The recent move has been swift and powerful. It pushed gold to a new 52-week high… And more than that, the metal crossed above $1,400 an ounce for the first time since 2013.

These are both fantastically good pieces of news for gold. They tell us that the rally is powerful… and that it can keep going.

In fact, history says we could see another 19% gain over the next year.

Gold has been dead money for nearly a decade.

Prices fell for years, forming a major bottom in late 2015. And while prices have rallied here and there since then, we hadn’t seen a major breakout.

Not until last month, at least…

You see, gold had been rallying since late last fall – but it took a breather. The metal fell in March and April. And it appeared to have lost all momentum.

Gold prices took off at the end of May and have now staged a major breakout. Take a look… 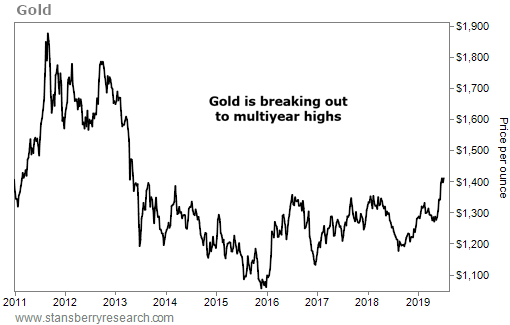 You can see that gold struggled to break out from similar levels in 2016 and early 2018. At first, the recent rally seemed to be losing steam as well. But then prices smashed through $1,400 an ounce last month.

Make no mistake, this breakout is huge for gold going forward. The metal has now jumped out of the range it’s been stuck in for years. And it hit a new 52-week high in the process.

The trend is powerful. And that means that buying gold after new 52-week highs is a powerful strategy. The table below shows it…

These numbers cover more than four decades of history. And while gold has only jumped 5% per year on average since then, buying after a new 52-week high leads to much better returns.

We’ve already seen double-digit upside in gold over the last two months. But history says we could easily see another 19% return this year, too.

We haven’t seen this kind of opportunity in gold in years. Again, the metal spent nearly a decade doing nothing. It was dead money, and investors had completely written it off.

They’re getting interested again now, though. And as more folks wake up to what’s happening in the gold market, it’ll bring more investment dollars… and ultimately lead to higher prices.

This could be the start of the next major gold boom. And that means you want to own the metal now.