In the markets, you are your own worst enemy.

If you’ve been trading for long, this phrase probably rings true…

Money brings up powerful emotions. And if you let those emotions affect your decision-making, you’ll often make mistakes…

Why does this happen? Sometimes it’s due to a lack of discipline or experience. But a lot of times, traders hold beliefs about the markets that just aren’t true.

One of the biggest misconceptions in the stock market is about volatility and the Volatility Index (also known as the “VIX”).

Today, we’ll show you what history shows us about volatility, and how you can use it to avoid making a common mistake…

The VIX is often called the market’s “fear gauge.” It measures expected volatility in the benchmark S&P 500 Index over the next 30 days.

When the VIX is high, it tells us folks are expecting a big move… usually a drop.

And when the VIX is low, it tells us folks are expecting a period of relative calm.

Because the VIX deals with expectations, many people think it’s a contrarian indicator…

They think a low VIX means folks are too complacent.

So when the VIX drops to low levels, they worry that a big jump in volatility – and lower stock prices – are just around the corner.

This gets folks into trouble. You see, history shows that the VIX is not a contrarian indicator…

On April 11, we ran a historical study on the VIX. We looked at what happened to stocks after the VIX held above 13 (a very low level) for three months, then dropped below 13.

The VIX had done exactly that less than a month earlier, on March 15. Here’s what we found…

The average and median returns across one-, two-, and three-month time frames were all positive. The worst returns weren’t too bad. And returns were positive across all time frames more than 67% of the time…

Folks get worried about stretches of low volatility. But low volatility – and the fear surrounding it – generally tells us we don’t have to be too worried.

Looking at history can help you avoid these kinds of misperceptions.

That’s why when we ran this study in April, we decided to spend the next couple of months mostly recommending bullish trades… and ignoring the common fears.

Now, we’re past the end of June. And we can see how our plan turned out this time around… 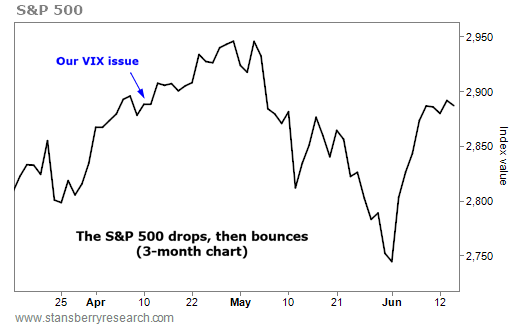 This picture and the returns don’t match the historical averages perfectly. But “matching the averages” isn’t our goal when we look at this sort of historical study.

Our goal is to get an idea for what has happened in the past in similar circumstances. Then, we can use this information – rather than emotions – to choose appropriate trading strategies.

Our study showed us that the worst returns under similar conditions weren’t too bad… and that most of the time, returns were positive. That gave us more confidence to place bullish trades. And it was the right decision.

Eight of the 11 trades we made in that window of time went up, starting from the date of our study. The average return on all 11 trades (including open positions and a few that we closed as winners) was 1.5% in an average of 24 days, or 23% annualized.

The stock market was flat. But because we had a neutral-to-bullish outlook, we used the right trading strategies… And the results were excellent.

Hopefully you’ve stayed long stocks and kept money in your highest-conviction ideas over the past few months. But even if you haven’t, you can learn from today’s essay…

First, keep watch over your emotions. They’ll often lead you to make bad trading decisions. So when you feel a strong emotion come up, check to see if it’s grounded in reality. History is a great guide.

And second, remember that when the VIX falls to a low level, it doesn’t spell disaster for stocks… If anything, it’s usually bullish.