I was encouraged to see some positive market action in June, with the S&P hitting a new high. Last week was considerably more volatile — so it’s a good reminder not to get complacent. Summertime trading can be like that, with lighter trading volumes that amplify the effects of market-moving headlines.

And earnings season will be here before you know it. As these two factors collide, it’s a recipe for the cream to rise to the top — and weaker companies become stocks to sell before they get hammered.

I purposefully designed my Portfolio Grader to distinguish between the two…before the rest of the world catches on.

That’s the bedrock of my “Quantum A” stock-picking system.

And I find that’s often the case with growth stocks that are receiving more hype than they really deserve.

Sure, we all want growth. But often times, eye-popping revenues can hide a lot of evils, and result in much more hype than is really warranted. This sends people stampeding into exactly the wrong names.

Luckily, we can also use my Quantum A system to find stocks to sell. Even if they looked great before.

That was the situation with Enron in the early 2000s.

Stocks to Sell: How My System Detected the Biggest Financial Fraud of All Time
Before Enron became one of the most infamous stocks ever, it was a great growth play.

Enron was once America’s seventh-biggest company, but also “America’s most innovative company” in Fortune magazine (six years in a row).

And at one point, it was a big, flashing, “A”-rated buy in my system. After I recommended the stock, it gained 36%.

Then Enron’s rating started to weaken. This was well before Newsweek declared “Lights out for Enron,” in December 2001. The corruption going on at Enron was yet to be discovered – but according to my system, the fundamentals certainly didn’t justify the hype.

So, we took our profits in Enron in April. It was one of the best moves of my career, it turned out! Other investors, sadly, got wiped out. Enron’s employees lost retirement savings. But we avoided the massacre that ensued a few months later.

Now, Enron is a pretty extreme example. So let me be clear: It does not take a massive financial fraud to wipe millions of dollars from the stock market.

When a stock gets into a bubble, even a much smaller prick will do it.

With that in mind, let’s look at some growth stocks to sell or avoid, as they are simply not worth your money at this time.

No list of overrated growth stocks would be complete without Tesla (NASDAQ:TSLA). Elon Musk may be a visionary, but that in itself is no reason to invest. Just take a look at TSLA’s Report Card from my Portfolio Grader. 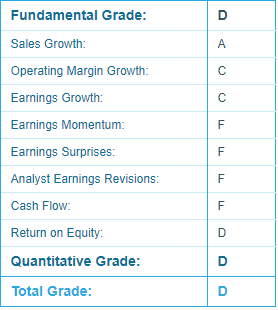 There are plenty of warning signs here — from cash flow to earnings momentum. No wonder Wall Street analysts are pessimistic…TSLA has a history of failing to live up to the hype.

Facebook (NASDAQ:FB) isn’t looking too good in my system, either: 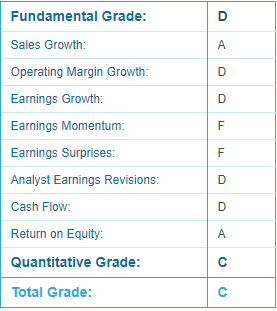 Like TSLA, earnings season may not be too kind to Facebook this time around. Even if it does manage a positive surprise, the metrics on cash flow, operating margins and the like just aren’t strong enough to tempt me.

Aurora Cannabis (NYSE:ACB), in my view, has been overhyped as well. I’m not a fan of most marijuana stocks, as popular as they may be right now. But when one does post strong fundamentals, I’m the first to admit it.

In fact, I recommend a marijuana REIT back in April in my Breakthrough Stocks service. The stock has hit new all-time high after high, and is sitting at about a 50% return on the Buy List. All thanks to my Quantum A strategy.

Unfortunately, that is not the case here. Aurora may be one of the heavyweights in this group — but as you see, there are some real warning signs for investors here. 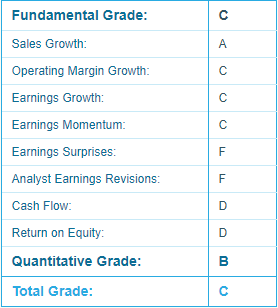 Even Baidu (NASDAQ:BIDU) fails on the metrics that earn stocks a Quantum A from me. Baidu may be the “Google of China,” but its earnings, margins and cash flow just don’t measure up at this time. 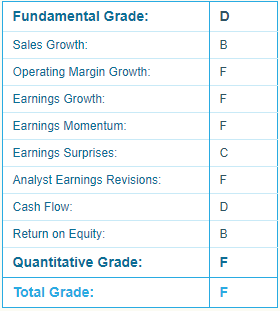 Box, Inc. (NYSE:BOX) is another that’s sometimes touted as a good growth stock. But after revising its guidance lower a few weeks ago, BOX is to be avoided now: 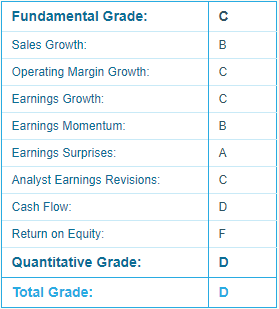 While the picture is not all bad, BOX is posting lackluster growth and simply failing to deliver for shareholders.

You’ll notice that all these “stocks to sell” I named rate fairly well on their sales growth. But as I’ve mentioned, there’s a lot more to a solid investment than that.

So, I’m looking elsewhere for great buys these days.