With bonds, precious metals, and oil in rally mode, investors have been ignoring one extremely profitable commodity: uranium.

Sometimes known as the “energy metal,” uranium is used to create electricity through nuclear power. It’s considered a green energy source and is responsible for as much as 15% of U.S. baseload power.

And with uranium prices set to rebound, the top commodity stock we’re eyeballing is set to soar between 186% and 233% in a matter of months.

You see, low uranium prices are creating a supply gap that will pull prices higher.

In fact, the long-term uranium price would need to double for supply and demand to balance out.

What’s more, the United States depends on China and the former Soviet Union for some 99% of its supply, producing just 1% of what it consumes.

That vulnerability is unacceptable to many, which will be a catalyst for reviving domestic production and profits for early investors.

Here’s why 100% of analysts agree this is a huge buying opportunity for energy investors right now.

Why Uranium Prices Have Bottomed

Many uranium miners currently produce at a cost of $55 per pound, while selling at somewhere between $24 and $31. But that’s going to change very soon – they’re about to receive a well-deserved boost.

Commodities investment guru Rick Rule recently commented, “Either the price goes up to the point where the industry stays in business, or the lights go out. Those are your two choices.”

Rick knows commodity stocks and how to play their dramatic cycles. And for him, the price required to keep the industry going and encourage new production needs to reach somewhere around $60 per pound.

That’s about 120% higher than current prices. And the catalysts are coming…

You see, by some estimates, supply will fall short of demand by about 5.6 million pounds of uranium in 2019, while 2020 may be looking at a gap of around 9.3 million pounds.

That will push prices up in a hurry. And the nuclear power sector is more than capable of paying the higher prices.

Shown below: A nuclear power plant’s supply of U3O8 (uranium oxide) represents only about 15% of its costs to generate power.

So even a doubling of prices is unlikely to affect the construction of planned new nuclear plants. 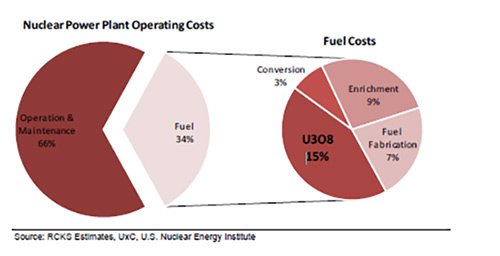 There are 450 operational reactors and roughly 50 new ones under construction in 15 countries. Meanwhile, many of the plants in the United States are seeing their lifetimes extended through upgrades, helping to maintain capacity.

In addition, there are about 160 further reactors in the planning stages globally.

And still, over the last three years, some roughly 31 million pounds of annual supply has been cut, mostly by some of the largest and lowest-cost producers, equating to roughly 20% of global mined supply.

These supply cuts are running head-on towards growing demand.

And yet another catalyst is brewing to potentially jolt even higher uranium prices.

Two U.S. uranium producers, Energy Fuels Inc. (NYSE: UUUU) and Ur-Energy Inc. (NYSE: URG), have filed a petition with the U.S. Department of Commerce under Section 232 of the Trade Expansion Act of 1962.

Their goal is to get relief for U.S. uranium producers on the basis that imports of uranium represent too high a portion of U.S. supply and therefore threaten national security.

Under the 1962 Trade Act, the president has the authority to require a higher proportion of U.S. supply be sourced domestically in order to protect national security. The petition is asking for a quota that would guarantee U.S. producers 25% of the market.

A ruling on the Section 232 petition is expected by July 14. President Donald Trump’s history of defending U.S. industries suggests a higher probability that some sizeable portion of American consumption will have to come from domestic sources.

That could help push uranium prices and uranium stocks up to anywhere from $55 to as high as $70 per pound.

Even without a positive Section 232 ruling, the looming shortfall this year and next should boost prices. By the same token, this deficit is likely to push utilities towards securing longer-term contracts, which would also put upward pressure on long-term uranium prices.

And here are my two favorite ways to play the pending uranium stock revival. These investments are your best chance at more than doubling your energy investment.

And let me repeat: One of these investments got a “Buy” rating from 100% of the analysts covering it. And what’s more, the average price target for this stock sits 186% above today’s, with a higher target of 233%.

That means all the experts who’ve researched this stock have agreed that you’ll come close to tripling your money with this play on uranium.

How to Invest in Uranium

The first is through a public investment vehicle that holds uranium oxide (U3O8) and uranium hexafluoride (UF6). Uranium Participation Corp. (OTCMKTS: URPTF) profits when the price of uranium goes up.

Naturally, this is a very direct bet on the price of uranium and about the simplest and lowest-risk way to bet on higher uranium prices.

Uranium Participation is essentially a closed-end fund. And like many, it sometimes trades at a discount to its net asset value (NAV). That has been the case lately, which may provide additional upside once uranium prices head higher and investors bid shares up to a premium over NAV.

Shares have just experienced what looks like a capitulation sell-off, especially given that it took place on heavy volume.

As you can see below, the relative strength index (RSI) and moving average convergence divergence (MACD) momentum indicators look quite oversold. If Uranium Participation reverses and closes above $4.25, that would be a trigger to buy half your total position. Look for a solid close above $4.40 (the recent high), and then you can add the second half. 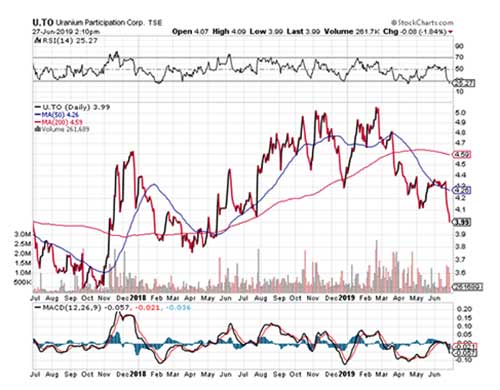 A higher-risk and higher-potential play to consider is NexGen Energy Ltd. (NYSE: NXE). This $550 million market cap exploration and development company owns a portfolio of high-quality uranium projects in the famous Athabasca Basin of Western Canada.

Analysts unanimously agree this one’s poised to grow as much as 233% in the next few months.

Even below the current spot uranium price, Arrow has a net present value of about $1 billion CAD.

At $50 per pound, Arrow would generate $909 million CAD annually in after-tax net cash flow and produce 25.4 million pounds of U3O8 at an operating cost of $4.36 USD per pound. Once the initial capital expenditure is included, the all-in cost per pound of U3O8 will be $17.23.

That will make it potentially the largest, lowest-cost uranium mine, providing as much as 25.4 million pounds of U3O8 per year, representing a whopping 21% of annual global supply.

Of course, production could still be a few years away. But with every dollar the price of uranium climbs, NexGen will become that much more valuable.

So, there are two catalysts set to push the price of uranium higher. Supply shortages are about to meet growing demand head-on, and the Section 232 petition could kick-start things in the very near future.

The time to build a position is now.