It doesn’t take long for most investors to give up. They think they have a plan… But a bit of uncertainty hits them, and they’re gone.

That’s what happened last month. It was one of the worst Mays in stock market history, as I explained yesterday.

Uncertainty flooded into the market, and investors panicked. Stocks made a one-way move lower in May, falling almost 7%.

Panic set in. But that is the wrong emotion to have right now…

If you look at history, it’s easy to see that what happened in recent weeks, however painful, is completely normal.

Simply put, corrections happen… even during a stock market Melt Up.

May was a rough one. Things seemed to be going fine, with the finalized U.S.-China trade deal just days away. Then the deal unwound, and folks ran for the exits.

The market is up again in recent weeks. But last month’s quick downturn has investors around the world asking the same question: Is this the end?

They’re asking if the Melt Up has run out of steam… if the “Melt Down” is just around the corner.

My answer – as you’ll know if you’ve been reading my work – is a firm “no.” I believe the Melt Up is still in place. The recent fall was just a bump in the road.

That’s because history shows us corrections are completely normal, even during a Melt Up in stocks.

It might seem odd that I’d expect to see falls like last month’s during a furious stock market Melt Up. But Melt Ups aren’t all sunshine and roses…

They’re highly volatile. Stocks move up and down vigorously during this final stage. Just look at the chart below to see what I mean. It’s the tech-heavy Nasdaq Composite Index during the dot-com bubble… 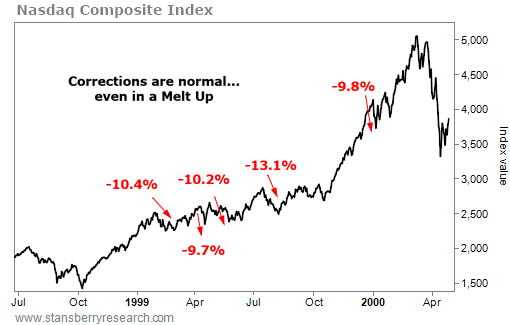 Without the arrows and numbers, you might have missed all the corrections that happened during this Melt Up. It would have looked like a one-way move higher for stocks. But that’s not really what happened.

Yes, the Nasdaq Composite did roughly triple in under two years. But it actually fell by roughly 10% on five separate occasions over the same period. Said another way…

There were five opportunities for folks to get scared out of the last big U.S. Melt Up.

It’s totally normal for stocks to fall, even during a Melt Up. I believe we just saw one of those corrections last month… The Melt Up is still in place in the U.S.

Of course, even if a correction is normal, it doesn’t mean that it isn’t the start of something worse. A 50% crash, after all, has to begin with a 10% decline.

Sure, stocks only fell 7% from all-time highs last month. That alone isn’t much. It’s not a decline you’d ever notice 10 years from now when you look back.

But folks aren’t worried about a 7% fall. They’re worried this could be just the beginning… and that the market could fall another 10%, or 20%, or 30%.

Fortunately, the market has already recovered well. Stocks are up 5% in just two weeks. And if my prediction of a continued Melt Up is correct, they still have much higher to go from here.

On average, declines like this one have actually led to double-digit gains in stocks over the next year.

That’s why I urge you to remember this lesson. Corrections are normal. And they even happen when stocks are melting up.

So don’t let yourself get scared out of the market… You want to stay long now.

The Exodus to Florida (and Texas) is ON

Does Social Security Income Go On My 2019 Tax Return?

Upgrades and Downgrades for Friday, 1/24