Entegris (Nasdaq: ENTG) – Entegris, Inc. develops, manufactures, and supplies products to the semiconductor industry and other high-tech industries. Those products include microcontamination control products, specialty chemicals, and advanced materials handling solutions. The company sells its products worldwide from its headquarters in Billerica, Massachusetts. Entegris was founded in 1966.

The company has seen earnings grow by 38% per year over the last three years. The most recent quarterly report showed growth of 6%.

Sales have grown at a rate of 14% per year over the last three years and they grew by 6% in the most recent quarter.

Entegris has really strong management efficiency measurements with a return on equity of 26.9% and a return on assets of 8.88%.

The company seems to be flying under the radar a bit as there are only nine analysts following the stock.

The short interest ratio shows a degree of pessimism toward the stock. The current ratio is at 7.84 and that is the highest reading in the past year. The ratio is high for two reasons—the number of shares sold short has increased dramatically in the last six months and the average daily trading volume has declined. 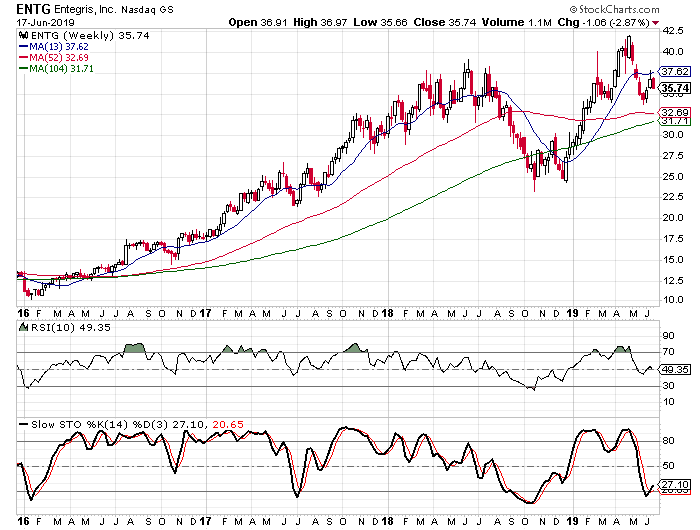 The thing that got my attention the most about Entegris’ chart was the fact that the weekly stochastic readings were in oversold territory. In the last three and a half years we have only seen three instances where the indicators reached oversold territory. Once the indicators made a bullish crossover in these three instances, the stock rallied in the ensuing months.

I also like the fact that the stock pulled back enough to generate the oversold readings from the stochastics, but the stock didn’t move below its 52-week moving average.

Suggested strategy: Buy ENTG with a maximum entry price of $37.00. I would set a target of at least $50 over the next 12 months (for a potential return of 35%-plus from here). I would suggest a stop loss at the $32 level.