Real estate investment trusts (REITs) are simply the best dividend payers you can own right now. These tax loopholes literally “print money” when interest rates fall. So, with Fed Chair Jay Powell signaling that rate easing is on the way, we should load up on real estate dividends.

REITs themselves have flown under cover for years, but “basic” income investors have finally started to wake up to just how effective REITs are.

In fact, these income-friendly real estate plays are, quite literally, world beaters.

A Netherlands study examining global assets from 1960 to 2015 found that the top-performing area of the market was not stocks, not bonds, not gold – but real estate investment companies and trusts.

By almost a full percentage point every year, no less.

More recently here in the US, the total-return tape tells a similar tale. 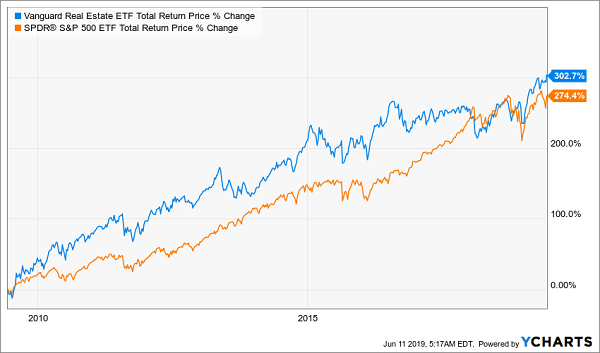 And these outsized returns have largely been delivered in cash. Over the past 10 years, only 25% of the S&P 500’s total returns have come from dividends. For REITs, that number is closer to 45%.

High dividend yield plus still-significant upside potential to grow your nest egg. I’ve pounded the table about this formula’s importance to retirees for years, and it’s the driving force behind my Contrarian Income Report’s 7%+ yields and 10.5% annualized total returns (including the fat dividends!)

And now, as I mentioned earlier, the Fed is signaling that it’s about to turn on the “buy signal” for REITs.

But make no mistake: Flat or lower yields are superfoods for real estate investment trusts.

You can see how the Vanguard Real Estate ETF (VNQ) has responded since the Fed’s signal that it would keep interest rates flat for the rest of 2019. And that little kick in June? You can thank renewed hopes for the potential for interest-rate cuts later on this year. 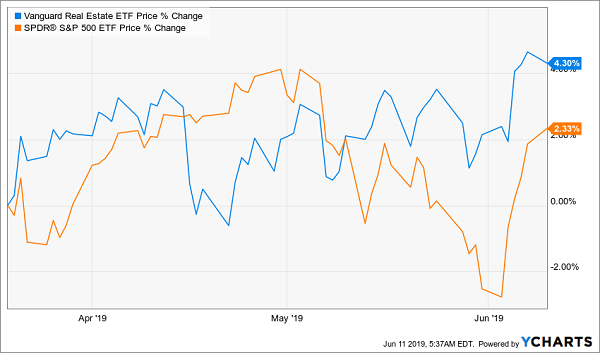 It’s not too late to enjoy the white-hot run in REITs, which is outrunning most sectors in 2019 on price performance alone! Thanks to this wildly bullish environment, investors have the chance to squeeze 20% returns out of the next 12 months. And that’s before collecting these fat dividends of 5.7%, 6.3% and even 7.0%.

Spirit Realty (SRC) is a changed company. The “new Spirit” is a single-tenant net-lease REIT that deals in retail, distribution and service-oriented companies. It leases out more than 1,500 properties in 49 states to 256 tenants such as Church’s Chicken, Walgreens (WBA) and Life Time Fitness.

That sounds like a large, diversified portfolio – and it certainly is. But Spirit also is leaner than it was a year ago. Last June, the company finalized the spinoff of Spirit MTA REIT (SMTA), which took many of the company’s noncore, lesser-performing assets.

Things have generally looked up since then. Standard & Poor’s upgraded the company’s credit this year to BBB/stable. Unencumbered assets (those free of any liens or other claims from financial institutions) jumped to 80%, from 58% prior to the spinoff. And its operational results have been stellar. In Q1, same-store sales grew 1.8%, occupancy was 99.3%, and Spirit upped its AFFO and capital deployment guidance for the full year.

Spirit Capital did decrease its dividend last year, too, but only to reflect the change of assets from the SMTA split. SRC had a history of payout increases prior to that, and considering that the current 62.5-cent dividend accounts for just 74% of this year’s AFFO guidance, future hikes are a strong bet.

Mid-America Apartment Communities (MAA) isn’t the flashiest of apartment REITs. While companies such as UDR Inc. (UDR) and Essex Property Trust (ESS) are concentrated in high-rent areas such as Los Angeles, San Francisco, Boston and New York, MAA is focused on the Southeast, Southwest and Mid-Atlantic. That means cities such as Savannah, Georgia; Jackson Mississippi, the Phoenix-Mesa-Chandler metro area in Arizona, and the Dallas-Fort Worth-Arlington metro area in Texas.

But it’s an opportunity I was excited about back in December 2016, soon after MAA jumped from 79,000 apartment units to 105,000 units by merging with Post Properties. 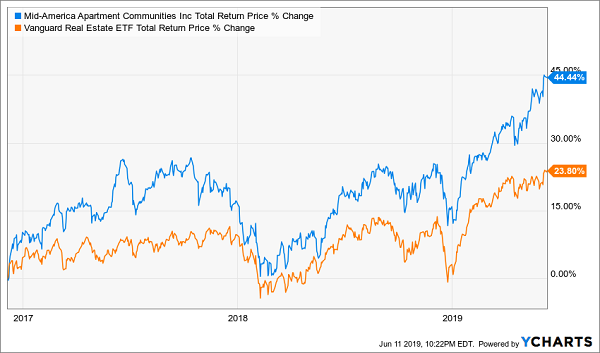 Mid-America’s footprint has grown a bit since then, to 101.954 apartment homes across 17 states and the District of Columbia. And it’s still a prime performer. AFFO over the past four quarters has added up to $5.52 per share, up from the prior four quarters’ $5.32. That included a substantial 8% bump up in AFFO to $1.47 per share in Q1 of this year.

MAA’s growth over the past few years has also allowed the REIT to flex its dividend muscles, expanding the payout by 31% in just five years. It still has stretching room, too, with its $3.84 per share in projected 2019 payouts well below the company’s AFFO estimate of between $5.47 and $5.71.

I just have one complaint: The company’s success has made it a little rich for my blood. Shares now trade at a frothy 21 times this year’s expected AFFO, which leaves little room for error. Mid-America should no doubt benefit from any Fed cuts, should they come, but ideally, it should be bought on weakness.

The trust’s 58 apartment properties contain 15,880 units across “non-gateway” U.S. markets in the Midwest, Mid-Atlantic and Southeast, such as Atlanta, Indianapolis, Memphis, Raleigh and Columbus, Ohio. They don’t sound like the most attractive housing markets, but IRT’s markets are expected to grow 1.14% in 2019—almost double the rate of gateway markets and better than the 0.72% expected across the U.S. Employment is growing faster, too.

The company currently is targeting 4,300 units for redevelopment across 14 of its properties. That investment of $50 million should result in a 15%-20% ROI, “unlocking an additional $8.0 to $9.0 million in annual (net interest income)” once they’re completed in 2020, IRT says.

My only complaint here is with the dividend. The 6.3% yield is high, but so is the company’s CFFO payout ratio, which sits around 95% of this year’s estimates. IRT’s dividend has been stuck at 72 cents per share for years, and it actually went from being a monthly payer to distributing quarterly as of 2018.

CubeSmart (CUBE) is an excellent player—albeit, one that shares space with numerous other strong players, in what is an extremely fragmented industry.

The self-storage industry is a very specific but massive $38 billion annual market in the U.S., spanning some 1.7 billion square feet across the country. Nearly 1 in 10 Americans use self-storage units. And self-storage construction spending has gone from just less than $1 billion in 2014 to about $5.3 billion in 2017. 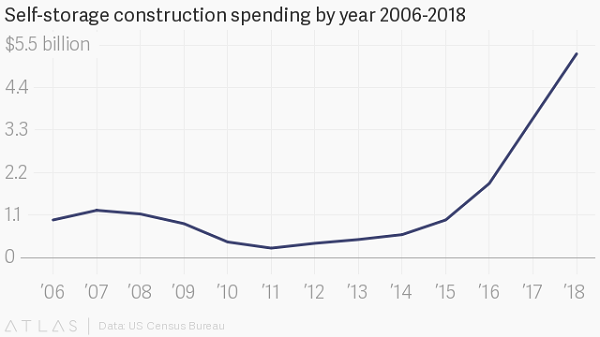 The ”Big Six” players, which include CubeSmart, Public Storage (PSA) and Extra Space Storage (EXR), account for just 18% of the market. Another 9% goes to the 100 next-largest self-storage companies. Just less than three-quarters of the industry is made up of essentially mom-‘n’-pop shops.

CubeSmart stands out by leaning on technology, whether it’s the heavy use of data in its marketing, to maximizing the efficiency of its space through dynamic inventory management, to in-place rate increases that maximize long-term revenue.

This plan has driven CubeSmart to 80% five-year growth in adjusted FFO, which the company has taken and funneled into a massive expansion of the dividend: 165% over that same time.

CUBE recently upgraded its adjusted FFO forecast for 2019, raising it a penny per share on the low end to a range of $1.65-$1.69. The only gripe here is that, like Mid-American Apartment Communities, CubeSmart’s valuation is plumping up, to about 20 times FFO those estimates.

I’m critical of indexed exchange-traded funds because many of them indiscriminately lump together a bunch of similar assets to create a so-so portfolio that de-emphasizes some winners while giving more voice to losers.

I prefer active management when it comes to REITs. And who better to trust than Cohen & Steers, which the company itself boasts was founded in 1986 as “the first investment company to specialize in listed real estate.”

Cohen & Steers Quality Income Realty Fund (RQI) delivers an above-average fund yield of nearly 7% while offering you exposure not to one, but 130 companies spanning hundreds of thousands of apartment, self-storage, data center, health care and other properties.

Its holdings include some true juggernauts of the real estate world, including …

Cohen & Steers’ RQI: You Pay, But You Prosper 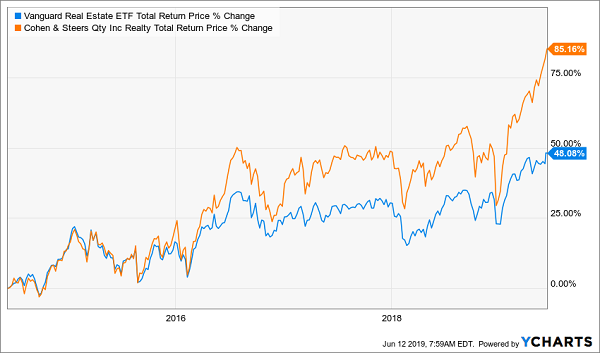 Does a closed-end fund run by some of real estate’s most talented managers cost more than a simple Vanguard index fund like the VNQ? Of course. But as RQI has proven over time: It’s worth it.

How Retirees Can Collect $3,166 Per Month in Dividends Alone [sponsor]

Do you panic each time you read about how much you’re supposed to have saved for retirement?

The experts at Merrill Lynch say you need $738,400 to retire. The talking heads on CNBC and Fox Business will tell you the magic number is $1 million or $1.5 million. Suze Orman collectively dropped our jaws when she said “You need at least $5 million, or $6 million. Really, you might need $10 million.”

They’re right—if you invest in low-yield bonds or the types of so-so-yielding blue-chip stocks that the financial media deems as “safe.” But there’s nothing safe about collecting so little income in retirement that you have to start taking large chunks out of your nest egg, which in turn saps your income potential even more.

But if you stockpile the picks in my “8% Monthly Payer Portfolio” —including my two favorite preferred stock plays, which each deliver uber-safe yields of more than 7%—you can bank on a comfortable retirement with a mere $500,000 nest egg.

In fact, you’d be collecting a fat $3,166 in pure income each and every month!

This easy, buy-and-hold dividend strategy can net you not just an average 7.6% annual yield, but also 10%-plus average price upside. That takes care of a critical retirement component that too many professionals overlook: The need to expand your nest egg in retirement because people are simply living much longer than old financial models are equipped to deal with.

You don’t need to learn some strange options tactics or complex trading routine. You can live off a $500,000 portfolio indefinitely by following just two simple steps:

This portfolio includes some truly amazing dividend stocks, including …

Get these and the other monthly dividend picks, including two rock-solid preferred-stock plays, that will unlock $3,300 in monthly income right now–for free! Click here to receive each and every pick in my 8% Monthly Payer Portfolio—complete with tickers, buy prices and full analyses—at absolutely NO COST to you.