Intel Corp. (Nasdaq: INTC) – Intel is one of the largest semiconductor manufacturer in the world based on sales and market cap. The company and Samsung are in a close race in both categories for the top spot. Intel is based in Santa Clara, California and was founded in 1968.

Intel has been beaten up quite a bit in the last five weeks or so.

The company is shifting its focus and making some key changes, but I personally think the selling has been overdone.

The company has grown its earnings at a rate of 25% per year over the last three years, but the growth was only 2% in the most recent quarter.

Sales have been growing at a rate of 8% per year over the last three years, but they were flat in the most recent quarter.

Despite the slowdown in earnings and sales, I think the management team is solid and the management efficiency measurements reflect that. The return on equity is 30% and the profit margin is at 34.1%.

One of the biggest drivers behind this recommendation is the sentiment toward the stock. There are 38 analysts covering the stock currently and only 14 have it rated as a “buy”. There are 16 “hold” ratings and eight “sell” ratings. This is well below average in terms of the buy percentage. 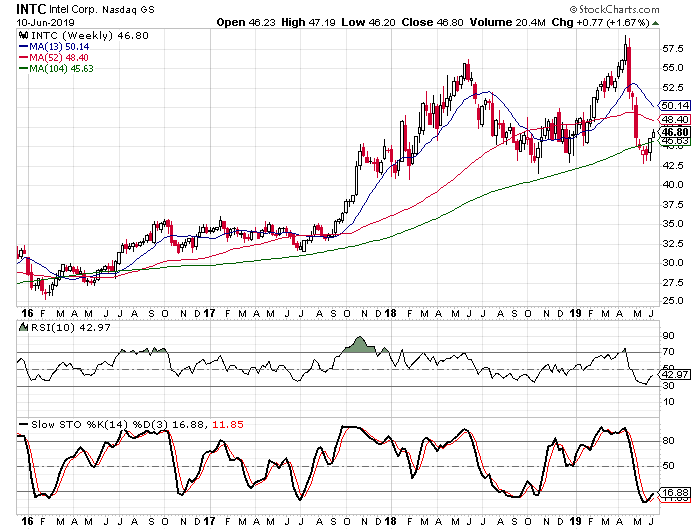 We see that when the stochastics were in oversold territory and the RSI was down below 40, the stock has bounced in most cases. I am also encouraged by the fact that the stock moved back above its 104-week moving average.

Suggested strategy: Buy INTC with a maximum entry price of $48.00. I would set a target of at least $60 over the next 12 months (for a potential return of 25% from current prices). I would suggest a stop loss at the $41 level.