We all know that China is growing in wealth and importance, but it’s hard to understand what that means on the ground.

To me – having seen it – it means excitement.

My friend and business partner Steve Sjuggerud has been years ahead of the curve on China. That’s why I joined him and a handful of adventurous subscribers last year to tour China’s major cities and speak with several prominent executives and investors.

I had to see it for myself.

Today, I’ll review the incredible growth story that’s developing in China and what it means not just for the Chinese, but for investors here in the U.S…

The Mandarin Oriental Hotel rises up along the river in the Pudong region of Shanghai.

I was lucky enough to stay there last year on our 10-day investment tour.

As I walked into the lobby, the bellhop seemed friendly and spoke English well.

I never pass up the opportunity to squeeze some intel from the people on the ground, so I asked him if he enjoyed working there.

He seemed perplexed for a moment – offended that I would even ask. Then he said, “I love working here!” He went on to rave about his job, the company, his personal life, and his city.

In the U.S., few would be content with such a job position. That’s not to call a bellhop or other service jobs lowly, but everyone in the U.S. believes climbing higher is better, somehow. After working on Wall Street and in medicine, I’ve seen it firsthand. The wealthiest bankers and the most acclaimed surgeons still feel the need to own and do more.

In the U.S., the bellhop wants to move up to desk clerk, and then manager. The manager wants to move on and open his own hotel. And heck, the owner might even wish to become president.

The Chinese bellhop had already made great strides in his life… afforded the opportunity by a transformative, high-growth economy. And he was genuinely satisfied.

A 50-year-old Chinese citizen has lived through transitions that are hard to imagine: From strict Communist rule, subsistence living, and zero technology… to an exploding market economy and cutting-edge infrastructure and information. Since 1980, the per-capita gross domestic product (GDP) of China has grown about 20 times. By comparison, income in the United States hasn’t quite doubled in the same period.

Today, a modern Chinese person can face a similar gain in opportunity by moving 100 miles from his country village into the nearest megacity… all in a single train ride.

This will continue to fuel China’s growth… And plenty of gas is left in this tank.

Understand, manufacturing nations often get stuck in what’s called “the middle-income trap.” Their workers start to earn more, and the country loses its cheap-labor advantage. But it can’t quite move on to higher-value activities to get rich. Of the 101 “middle income” countries in 1960, only 13 managed to become high-income countries by 2008.

To counter this threat, the Chinese government has spent roughly two decades guiding the economy and investing in building projects to provide economic stimulus. The plan is to make China’s middle class rich enough and its business sector smart enough to power its own economy and growth.

So far, it’s working. China’s middle class has grown from essentially zero a couple decades ago to 430 million people. By the mid-2020s, that’s expected to reach 780 million.

This middle class is buying and spending. China’s not just a manufacturing exporter anymore. Over the past decade, growth in private consumption has outpaced the overall economic growth rate. And household consumption accounted for about four-fifths of GDP growth last year.

On the official numbers, GDP growth was 6.6% in 2018. That still leaves it at a bit of an uptick after growth slowed from higher levels a decade ago…

It’s fair to be a bit suspicious of the Chinese government’s numbers. And most China-watchers who compile their own numbers find growth closer to 5% or 5.5%. But whichever number you choose, it’s still close to twice the growth you see in the U.S.

Most important, the government realizes it can’t keep pushing this agenda indefinitely. With the consumer taking over, the government has started to rein in credit growth. While borrowing regularly grew around 20% a year from 2011 through 2014, that has steadily trended down toward 10% since then… 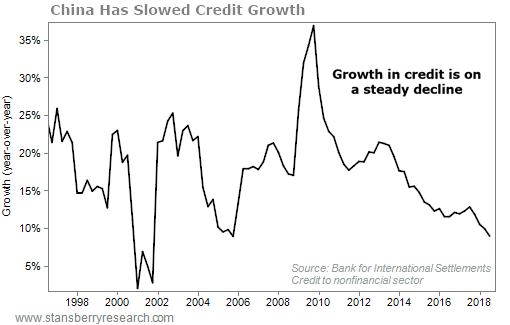 With the economy deleveraging, the risk of investing in China will decrease. If you are cautious and keep your position size small, the benefits could be impressive.

We’ve all heard about the Chinese growth miracle. You could spend a lifetime studying the numbers and the history behind them. But the incredible nature of the country’s boom is impossible to fully comprehend unless you’ve been there, on the ground.

I’m convinced the economic returns from launching yourself into China’s private markets – “jumping into the sea,” as they call it – will drive one of the greatest waves of wealth-creation in the world today. Don’t let this opportunity pass you by.