Millions of investors are complaining about the overwhelmingly negative impact that trade war tantrums are having on their portfolios. Yet, very few do anything about it.

Not that they don’t want to, mind you.

They can’t. The digital world we live in makes it nearly impossible to distinguish truly important and potentially very valuable information from trivia data. So, they wind up lurching from one investment to the next, often with nothing except losses to show for their effort.

Savvy successful investors, though, have a secret.

The Internet was supposed to dramatically enhance our lives by connecting humanity and, among other things, allow us to become better investors.

The presupposition was that more information would contribute to better decisions and bigger profits as we learned to “multi-task.”

Instead what you have is a constant mishmash of data that splits our attention.

Making matters worse, much of it is wrong.

In fact, multi-tasking is a profit killer.

A 2009 study from Stanford University’s Communication Between Humans and Interactive Media Lab found that heavy Internet users who constantly multitasked while watching TV, reading, surfing the net, and Facebooking scored significantly worse on cognitive tests than those who didn’t.

Again, proponents said that didn’t matter. “We” – meaning society as a whole – would mature as we grew used to the newly found digital world we live in. We’d learn to control the intrusion they pontificated.

In fact, the problem is getting worse. 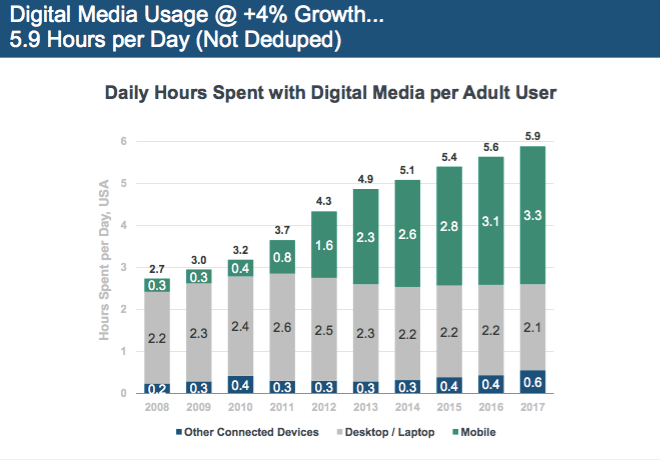 A 2018 study from Ofcom, the UK’s telecom regulator, found that people check their smart phones an average of once every 12 minutes while awake. A jaw-dropping 71% said they never turn their smart phone off and 40% said that they check ’em within 5 minutes of opening their eyes.

The problem is now so bad that there’s even a name for this kind of behavior – CPA, which stands for continuous partial attention. Coined by Linda Stone, a former Apple and Microsoft consultant, it denotes a state of near constant digital alertness.

Which brings me full circle.

People with CPA are constantly scanning for new stimuli, which promotes a state of addiction and scanning, rather than giving their full attention to anything.

Everything essentially becomes a distraction because people cannot control their attention which means they are far less likely to distinguish critically important information from trivial data.

That’s fine if you’re talking about memes like “Grumpy Cat” or the “Most Interesting Man in the World,” but the same behavior will doom your retirement if you don’t get it under control.

Investors are caught up in a constant cycle of news related to everything from the President’s latest tweets to who said what to whom in China. They buy one moment and sell the next, while digging themselves into an unprofitable hole, and the markets reflect that behavior.

There’s an easy solution, though.

Instead of asking which companies China’s trade war tantrums will clobber and cowering in fear, try focusing on which companies are going to come roaring out of the basement when there’s a deal. And this is the best stock to do just that…

This Is the Best Stock for Trade War “Tantrums”
My favorite is Nvidia Corp. (Nasdaq: NVDA).

Nvidia turned in non-GAAP EPS of $0.88 per share versus expectations of only $0.81 per share. Most of that was from gaming, which accounted for $1.05 billion in revenue versus just $930 million in expected top line numbers.

Critics charge that Nvidia does “big business” in China so it makes sense the company is being gutted by trade-war fears and what could be a cloud driven slowdown.

Nvidia derives about 20% of its revenues from China which means that 80% isn’t.

Nvidia is heavily involved in artificial intelligence which will continue to grow as the world becomes more digital. Applications include self-driving vehicles, robotics, data centers, and more.

Not many people realize this because they are so focused on China, but Nvidia is partnered with Toyota Motors Corp. (NYSE: TM) and a key component to both the Constellation and Pegasus systems it provides. Daimler AG (OTC: DMLRY) is also in the mix and, in case you’re wondering, Tesla Inc. (Nasdaq: TSLA) isn’t.

Nvidia also makes the best gaming chips out there. Most investors don’t realize that the blocky-chunky graphics we grew up with have transitioned to smooth, movie like quality today largely because of Nvidia. The company invented GPUs – Graphic Processing Units – in 1999 and has never looked back.

Neither of these markets are particularly glamorous, but they are both growing hand over fist. What’s more, they are both tapped into four of the six Unstoppable Trends we follow.

The stock is bouncing along in the low-$150’s at the moment, which is a great buy for savvy investors with the right perspective. Tactically speaking, though, I think we could see a final Chinese-trade-tariff-tantrum related drop under $135 that’ll test January lows.

The best way to play that possibility is also one of my favorite Total Wealth Tactics, the LowBall Order.

I suggest entering a lowball order to buy shares of NVDA at $135 or less.

If this gives you pause, I understand. Stocks are all over the place, and that’s scary, especially with the constant barrage of trivial data coming at you from every direction.

What you want to focus on – meaning give your undivided attention to and focus on – is deceptively simple.

… Warren Buffett regularly buys into markets others fear and specializes in companies where the prevailing wisdom is often wrong. And, he’s worth roughly $84.7 billion.

… The legendary Jim Rogers is noted for taking the opposite side of “the trade.” He and co-partner George Soros famously ran the Quantum Fund up a staggering 4,200% over the course of ten years versus only 47% from the S&P 500 by doing just that.

… The late Sir John Templeton famously bought $100 worth of each stock trading below $1 in the New York and American stock exchanges on the eve of WWII, selling them for nearly four times as much after four years. Every $10,000 invested with his Templeton Growth Fund (MUTF:TEPLX) since inception in 1952 would be worth $12,403,812.74 today.

In closing, let me leave you with a final thought.

Any Chinese trade deal – no matter how “good” or how “bad” it actually is – has the potential to create an upside move that is going to make your head spin.

Buying Nvidia at these levels when very few people can see that outcome because they’re distracted could be one of the savviest and most profitable moves you make.