I just returned home from a trip to Asia. And a 20-hour flight gave me a lot of time to think…

A few years ago, the U.S. dollar wasn’t nearly as strong as it is today. In fact, I remember clearly when you would spend $1.50 to buy a single euro and almost $2 to buy a single British pound.

I even remember getting 40 Indian rupees for each dollar. On my most recent trip, I was getting 70!

And that means one thing…

Thanks to the strong U.S. dollar, you’re much wealthier than you think.

Back home, you may still be paddling the same boat, but if you take a glance overseas, you’ve just increased your wealth by up to 50% or more.

It doesn’t matter where you look today – with the exception of Switzerland, your dollar goes much further everywhere than it used to.

And I have no doubt that in the coming years that trend will change.

The dollar will weaken, and you will have missed a generational opportunity.

The chart below shows you how quickly things can change.Chart – U.S. Dollar Index 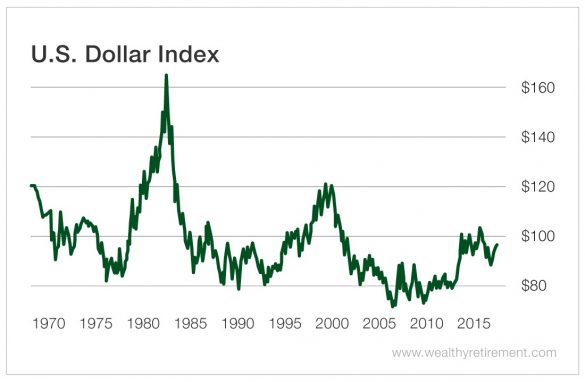 We are at unique point in time where all the major currencies of the industrialized and emerging worlds are weak compared with the U.S. dollar. Low economic growth in most countries has forced interest rates down across the globe and increased monetary stimulation.

The result is that all countries have flooded their respective markets with yen, pounds, euros, krones… you name it.

In all of this, you’re the big winner – but if you decide to let this opportunity pass, that win will disappear as quickly as it came.

Find the Best Places to Retire
Here’s what you can do: Pick a spot in the world that you’ve dreamed about living in. Maybe it’s somewhere you vacationed or somewhere friends have been talking about. Now research the retirement provisions that each dream location offers.

Some countries, like Costa Rica, offer excellent and inexpensive healthcare. Costa Rica’s retirement plan for expats and foreign retirees costs less than $100 per month, and most medical procedures cost one-third of what you’d pay stateside.

(The same goes for places like Thailand, where more and more people are traveling to have medical procedures done in world-class clinics. In fact, some insurance companies are even sending policyholders to places like Mexico to get lower-cost treatment.)

Now, I’m not saying that you should head to Mexico for your next knee operation without weighing your options. But it’s important to know that it is an option… and that with your strong dollar it will cost you one-third of what you’d pay here.

For example, here’s the cost comparison for a hip replacement.Chart – Total Cost of a Hip Replacement 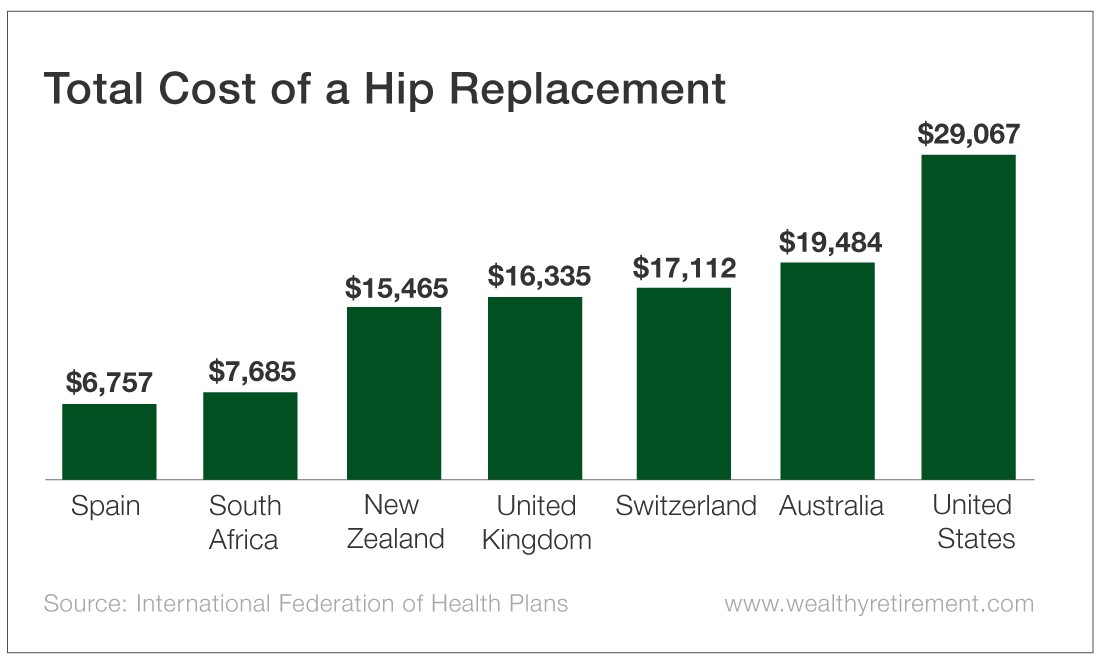 It’s not that much different than crossing the border to buy prescription drugs – just do your research first.

Some people are less inclined to move out of their comfort zones, and that is understandable. Some places are tough from a language perspective. Others are too far from relatives. There is a host of reasons.

But if you are serious about improving your quality of life, you can explore a range of countries where English is spoken widely and large expat communities are not unusual.

The choice is ultimately yours, but it really helps to have the world’s strongest currency in your pocket… at least for now.

How to Manage Your Response in Today’s Market