We all trip up occasionally in life. We forget to pay a specific bill and get stuck with a late fee, or neglect to maintain our vehicles and then face costly repairs. These are unfortunate but fixable blunders. Other slip-ups, however, aren’t as easy to recover from. Here are three mistakes you might make during your working years that could have an extremely negative impact on your golden years.

Many workers don’t set money aside for retirement because they think they’ll get by on Social Security alone.

But, actually, those benefits are only designed to replace about 40% of the average worker’s pre-retirement income, and most seniors need about double that amount to maintain a decent lifestyle.

If you don’t make an effort to save at all during your working years, you’re apt to regret it during retirement, so rather than go that route, carve out some room in your budget for consistent savings.

As a general rule, you should plan on setting aside at least 15% of your income for retirement, but if you can’t swing that, save something. Any amount is better than nothing.

2. Not saving from an early age

The more time you give your money to grow, the more you stand to benefit. It’s a concept known as compounding, and it’s the very thing that might enable you to turn a series of modest retirement plan contributions into a substantial sum over time. On the other hand, the longer you wait to start building a nest egg, the less you’ll grow your money and the less you’ll have for your golden years.

Check out the following table, which shows what a monthly retirement plan contribution of $300 might become over time: 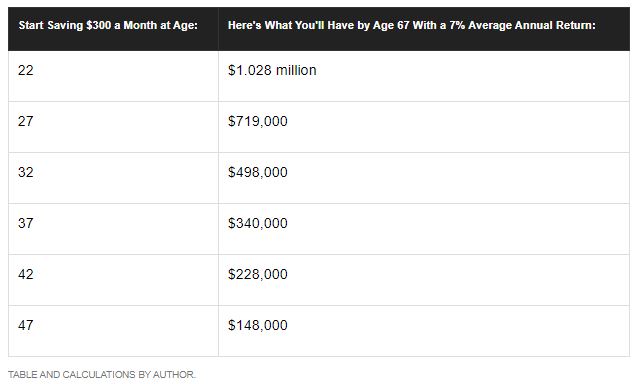 By kicking off your savings efforts at age 22, you’ll give yourself 45 years to build wealth. During that period, you’ll wind up contributing $162,000 of your own money, yet you’ll wind up with over $1 million thanks to the beauty of compounding.

On the other hand, if you don’t start socking away that $300 a month until age 47, you’ll have just a 20-year savings window. At that point, you’ll wind up putting in $72,000 of your own money but seeing only a $76,000 gain — better than nothing, but not nearly as impressive as the gains you could benefit from by starting to save at an earlier age.

3. Playing it safe with investments

Many people fear the stock market because of its volatile nature. But if you don’t invest in stocks during your working years, you may end up retiring with a lot less money.

In the table above, we applied a 7% return on investment to the figures at hand. That 7% is actually a couple of percentage points below the stock market’s average, so it’s a reasonable assumption for a stock-heavy portfolio. But watch what happens when we apply a 3% return instead, which is what you’d get with more conservative investments, like bonds: 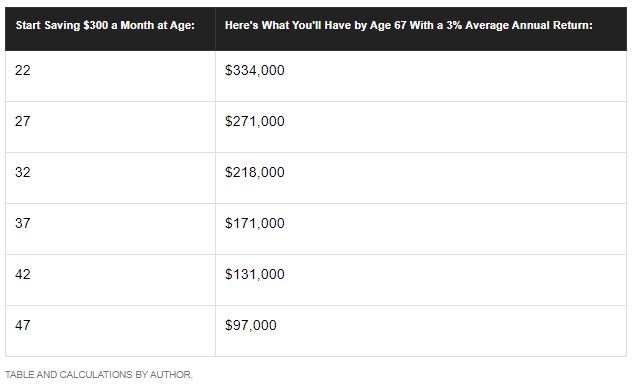 As you can see, the numbers aren’t nearly as substantial, which means you really can’t afford to play it too safe with your investments.

As long as you’re 10 years away from retirement or more, you should feel fairly comfortable loading up on stocks. Even as retirement nears, it pays to retain some stocks in your portfolio, and slowly shift toward a more even split between stocks and bonds as you prepare to leave your career behind you.

The decisions you make during your working years could impact your retirement for better or for worse. If you avoid these damaging mistakes, you’ll be more likely to enjoy your golden years without having to worry about money.