Dr. Richard Smith can make you a lot more money from your investments.

Richard just spent a few days in town, and it reminded me of a couple things… For one thing, he’s one of the smartest and nicest guys I know. He’s also made a lifelong commitment to helping individual investors become better investors.

That commitment started from his own huge investing mistakes…

After graduating from Cal-Berkeley (one of the nation’s top schools in math), Richard got a PhD in “mathematical systems theory.”

In short, he knows numbers. But that didn’t save him in the dot-com bust in 2000. Like many investors, he got “burned.”

He vowed to never let that happen again.

So he set out to figure out how to avoid similar losses in the future.

He wanted to prevent other people from making the same investing mistakes he did. A lot of it came down to a simple secret…

Richard started looking into what the top traders were doing… guys like the ones in the popular Market Wizards investment books, for example, who had turned small piles of money into very large ones.

It turned out “cutting your losses early” was a common theme across all those successful investors.

Individual investors typically don’t do this… because they typically have no “exit strategy.” They have reasons to buy a stock, but they don’t have a clue when to sell. Meanwhile, a successful trade is made up of two parts – a smart entry and a smart exit.

After much study, Richard found the simplest thing individual investors can do to continually increase the value of their portfolios is to make sure they have an exit plan that includes cutting their losses early.

The simplest way to do that is to use trailing stops.

If you’re not familiar with trailing stops, the concept is simple… Think about each word individually: “Stop” is to stop your loss – to not let something fall by more than a certain percent. If it does, you sell.

The “trailing” part of “trailing stop” means that your “stop” can move – if your stock hits a new high, your stop moves up higher, too – it “trails” new highs in your investment.

But here’s how we traded it in True Wealth…

The stock soared soon after we bought it. Shares made it all the way up to more than $250. And we simply followed our plan. We sold half after we were up 100%. Then, when the stock fell 25% (hitting our trailing stop), we sold the rest. 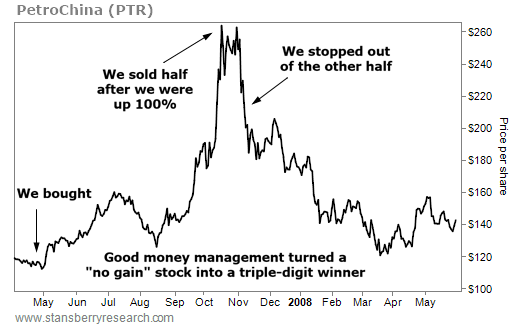 In short, by sticking to our exit plan, my readers made A LOT of money in a stock that ultimately went nowhere.

Richard created a simple website that tracks these things for you. He calls it TradeStops.

You enter your stock symbol, the date you bought your stock, and the percentage trailing stop you want to use. TradeStops automatically adjusts your trailing stops for you. It will also send you an e-mail or a text message when your stock hits its trailing stop.

Richard’s website allows you to do fancier trailing stops if you prefer (including stops that change their percentages in response to risk and volatility). But as a first step, I don’t think you need to get fancier than this…

To be a more successful trader and investor, you must have an exit strategy.

Richard believes the simplest thing most individual investors can do to improve is to use trailing stops. Start putting this strategy to work today.

And if you’re looking for the easiest, lowest-stress way to do it, check out TradeStops. Richard’s software is the simplest way I know to create and easily follow a rational exit plan… and keep you in the money.