Hershey operates through two segments based on geography:

While Hershey sells its products in about 90 countries, nearly all of its revenue and profits are generated in the U.S. and Canada.

Mature consumer foods companies like Hershey are known for their stability. Their business models usually evolve very slowly, and consumers continue to eat during good times and bad.

Importantly, their brands enjoy prominent shelf space thanks to decades of marketing investments, longstanding relationships with retailers, and well-known tastes customers have historically been willing to pay a premium for.

Let’s take a closer look at the key advantages that have helped Hershey pay uninterrupted dividends for nearly 90 consecutive years.

Over the past 125 years, Hershey has built up a strong assortment of popular candy and snack foods brands that the company has supported with aggressive advertising, including 6% of 2018 sales ($480 million).

Including R&D to support new product launches, the company generally reinvests about 8% of annual sales into activities that help secure or grow its market share.

Over the past five years, Hershey has invested about $3 billion into marketing and R&D, a figure few rivals can match. In fact, in order to break into the retail market upstart brands typically have to pay retailers slotting fees that makes competing with industry giants like Hershey even more challenging.

The firm’s brand-building efforts and longevity (many decades of spending to promote awareness of its products) have helped Hershey become the dominant player in North American chocolate, where it enjoys about 45% market share. That’s up around 3% over the past eight years and well above the 30% share its nearest competitor maintains.

Across all U.S. confectionery sales, Hershey commands an impressive 30% market share. Importantly, private label products account for less than 5% of the market. Unlike some other food categories, when consumers want to indulge on a guilty pleasure snack in the confectionery market, they have shown a habit of buying products sold under their favorite well-known brands. 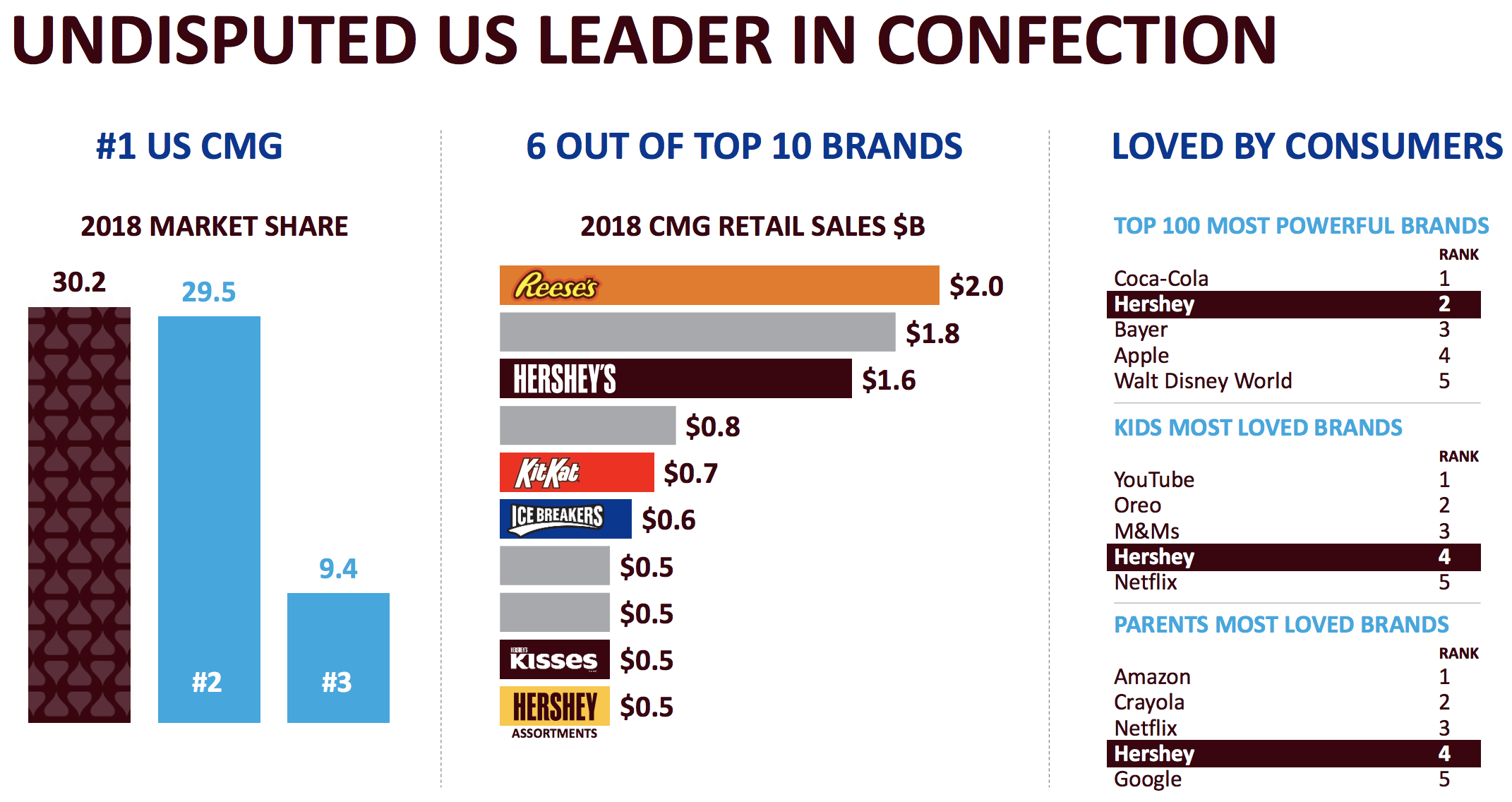 Hershey’s dominance is reflected across its top six brands (Reese’s, Hershey’s, Kit Kat, Ice Breakers, and Kisses), which on their own generate $5.9 billion in annual revenue (about 75% of company sales).

The popularity of these mega brands gives Hershey a solid position with grocers, convenience stores, and other retailers in terms of securing the best shelf space and holding its prices. These companies want proven products that sell quickly and draw customers to their stores.

This has historically allowed Hershey to raise its prices faster than inflation (about 0.4% annually over the last five years). In 2019 management plans to hike North American prices by 1.5% in order to offset rising input costs. Strong pricing power is a sign that Hershey’s brands remain very competitive despite shifting consumer tastes, which have caused headaches for some of its packaged food peers.

As a result, like many food companies, Hershey relies on acquisitions to help fuel its growth. In fact, the company and has bought over 50 businesses and brands since 1963. Most recently, Hershey’s acquisitions have focused on taking part in the “healthier snack” movement.

As you can see, Amplify and Pirate Brands are not especially large, combining to just $375 million in 2018 sales (5% of Hershey’s total revenue). However, both are growing at a solid mid-single-digit pace annually, which is roughly three times the growth rate of the snack food market.

Despite its focus on acquisitions, Hershey has done a good job maintaining modest debt levels and a conservative balance sheet. In fact, the company enjoys a strong “A” credit rating from Standard & Poor’s, providing it with the financial flexibility to continue investing in its brands, acquiring on-trend products, and returning cash to shareholders.

CEO Michele Buck, who took over the top job in 2017, has made Hershey’s domestic operations the key focus of the company. While Hershey has in the past tried to find stronger growth abroad, the firm has recently been selling off some international brands because it’s finding that it lacks the same competitive advantages (such as in distribution and marketing power) as it does in the U.S.

While Hershey’s organic growth rates are solid in emerging markets, this division has lost money in two of the last five years, due largely to its lack of scale. Acquiring global food brands can also be trickier than in the U.S. since consumer tastes are often quite different.

As a result, the company’s primary focus is on growing its market share in the U.S., including through adapting Hershey’s brands and product mix to changing consumer tastes which are increasingly skewing to healthier snacking options.

Hershey is focusing on launching more organic and natural foods, as well as less processed options that are located at the periphery of the grocery store (where consumers are increasingly shopping).

The company also plans to reduce its overall product mix in order to focus more of its marketing dollars on its strongest mega brands, which will free up additional resources for promoting its recent acquisitions.

Part of the firm’s advertising strategy is to embrace a more data-driven approach. Specifically, Hershey is working with key online food sellers (like Walmart and Amazon) to gather consumer shopping data so it can better target its online advertising dollars.

For example, as more consumers shop for groceries online, Hershey can use digital reminders to showcase its relevant products to consumers as they fill up their virtual shopping carts.

Besides focusing on bolstering its digital position, Hershey’s increasing North American focus is probably a wise move because its well-established manufacturing, distribution, and logistics chains in its home market result in strong profitability for the company.

Going forward, Hershey’s excellent profitability should be supported by management’s belief that the firm can cut costs by $150 million to $175 million (about 2% of sales) via improved efficiencies at its U.S. factories and reducing spending on less profitable international operations. Those savings would further lift margins and cash flow to support a safe and growing dividend.

Over the long term, Hershey’s sales seem likely to grow at a low- to mid-single digit pace. The U.S. food industry is very mature and perhaps becoming increasingly competitive due to changes in consumer tastes and shopping habits, which could make organic growth more difficult for Hershey. However, the firm’s brands remain strong in their core categories, and acquisitions will continue supporting top-line growth as well.

Management thinks it can deliver 2% to 4% annual sales growth and 6% to 8% EPS growth over time. This guidance is essentially in line with the company’s historical growth rates and thus seems reasonable.

The company says it is committed to a dividend payout ratio of at least 50%, which is about where this metric sits today for Hershey. Therefore, if management is able to deliver 7% long-term EPS growth, then investors can likely expect around 7% annual dividend growth as well.

However, while Hershey appears to be one of the better consumer foods companies available today, there are still risks that investors need to consider.

Like many large packaged food companies, Hershey struggled with a sharp slowdown in growth over the past few years. While the company’s growth accelerated in 2018, consumer tastes are changing, with high-calorie candy being out of fashion with today’s more health-conscious eaters.

While Hershey is moving in the right direction with acquiring and marketing healthier options, keep in mind that about 75% of its sales come from its top six mega brands, which do not fit with what might be a permanent secular trend in consumer tastes and shopping habits.

In the past few years, management has said that mass-market advertising for some of its smaller brands has not been having the desired returns on investment. Thus Hershey refocused its market efforts on its core brands, but again those are its dominant candy names which could struggle to generate modest organic growth.

In such a scenario, Hershey could find itself increasingly dependent on making acquisitions to expand and diversify its business, which is a riskier growth strategy. Every M&A deal comes with the risks of overpaying for assets, increasing debt on the balance sheet, and failing to achieve the long-term cost savings or sales growth synergies that management hopes for. After all, Hershey’s expertise is in marketing candy rather than healthier options.

Volatile commodity costs are another risk factor to consider, although they are unlikely to threaten Hershey’s long-term earning power. The company’s chocolate-focused products require a number of raw ingredients, including cocoa liquor, cocoa butter, and cocoa powder.

Prices for these raw materials and others can swing meaningfully from one quarter to the next, potentially crimping Hershey’s profitability.

To protect its margins the firm has historically been able to raise its selling prices above inflation rates, flexing the strength of its popular candy brands.

However, the risk is that a heavy distribution concentration (28% of 2018 sales were to McLane Company, which is a Walmart distributor) might reduce pricing power in the future.

Mass retailers like Walmart have struggled with maintaining their own margins as they move to a more online-focused (and so far less profitable) business model. As a result, Hershey could face greater resistance on raising prices than it has in the past, especially given that some of its core products are (slowly) becoming less popular with certain consumers.

For now, Hershey appears to be executing better than most of its packaged food peers as the environment evolves. Management is sticking to the company’s strengths while maintaining a safe balance sheet as it pursues both organic and acquisitive growth.

Hershey is one of America’s best food company success stories, having spent over 100 years building up a strong stable of beloved candy and snack brands. The chocolatier still enjoys a wide moat today, created by industry-leading economies of scale, a large advertising budget, and premium shelf space across its core North American market.

That being said, with 75% of sales currently derived from just six candy mega brands, Hershey could struggle with slower sales growth than it has enjoyed in the past. Investors will want to monitor Hershey’s top-line growth in the coming years to make sure that management’s long-term shift to healthier and more popular food items is actually achieved, without sacrificing margins.

Even if long-term growth is ultimately slower than expected, Hershey should remain a cash cow with an extremely safe dividend thanks to its well-known products, the entrenched nature of guilty pleasure snacks, and management’s financial conservatism.