“Choose your friends wisely – for you become them,” my good friend Porter Stansberry said to me, way back in our early 20s.

I’m sure someone else said that first. But I first heard it from Porter – and it stuck with me.

I may be biased here, but I believe I’ve chosen my friends wisely over the years. And my Norwegian friend Svein Rasmussen is at the top of that list…

To give you some backstory, Svein competed in the 1984 Olympics in windsurfing. And today, he runs what is quite possibly the world’s top boardsports company – Starboard.

That’s not the only reason I’m proud to know him, though…

Last week, he impressed me again… A fascinating Svein story unfolded that is just too extraordinary not to share with you.

A word in advance – today’s story is not about the latest hot stock tip. If you’re looking for the next cannabis-crypto play, you won’t find it here.

Instead, this story is much bigger. It’s about one way to live a richer life. It unfolded organically… unassumingly… through the day.

Last Sunday morning, Svein handed me a metal water bottle as we left his house in Bangkok, Thailand for his beach house in Pattaya.

I didn’t think much of it… We had a 90-minute car ride ahead of us. And instead of handing me a plastic water bottle, he handed me a metal one.

Svein’s Bangkok-based company makes championship-winning boards for windsurfing, kiteboarding, stand-up paddleboarding, and – the latest thing in his ocean world – hydrofoiling, with boards that lift out of the water.

We were headed to his beach house in Pattaya to check out some of the early prototypes for the 2021 model year and get on the water. When we arrived, he showed me where I could refill my water bottle. Then we headed out to have lunch – to a fine restaurant called The Glass House a quarter mile up the beach.

We started walking on the beach toward the restaurant. On the way, Svein picked up a piece of trash that had washed up on the shore – an empty 50-pound bag of rice, about the size of a kitchen trash bag.

As we kept walking, he bent down and picked up an empty one-time-use plastic bottle and shoved it in the bag. Then, about 10 feet later, he did it again. And again.

At first, I hadn’t noticed the trash… My senses were overloaded, checking out the high-rise buildings, the ocean, and the unique mix of people in Pattaya. But when I realized what he was doing, I saw what Svein saw. The trash on the beach was just everywhere.

I followed his lead, picking up trash – typically one-time-use plastics – about every 10 feet. By the time we got to the restaurant, we had completely filled the bag up with trash.

“That’s about 10 pounds of plastic,” Svein said to me as we walked into the restaurant.

I told him I couldn’t believe how much one-time-use plastic was littering the beaches. “Is anything being done about it?” I asked. Then, Svein hit me with a bombshell…

“Steve, all the garbage we picked up has accumulated in the last couple hours,” he said.

“Because there’s a big crew that comes through and picks up the trash on the beaches here in the mornings,” Svein said. Unbelievable!

The story gets more surprising… Back at Svein’s house after lunch, I saw a crew unloading full trash bags onto his property.

“What are they doing?” I asked.

“Oh, that’s the plastic trash from our beaches from this morning,” he said.

“Who pays these folks to pick up the beach trash every morning?” I asked.

“What do you mean by ‘we?'” I asked. Was he talking about the local government?

“I tax myself, and we pay the crew from that tax,” he answered.

“You’ve heard of carbon offsets right?” Svein said. “That’s where companies that negatively affect the environment do something to offset the damage to the environment. They want to improve their carbon footprint, hopefully on their way to being carbon neutral.”

“Well, I want my company to be plastics neutral… We go through a lot of plastic-related materials in our business. So we got an external audit of our plastic footprint. We then created a self-imposed plastics tax to bring our company closer to being plastic neutral.”

“Plastic neutral? I have never heard of that before. And… you tax yourself? Really?”

“Yes, because it feels like the right thing to do. We pay them more than they would earn washing dishes in a restaurant or doing yard work.”

Svein asked the team how much trash they picked up on the beach that day. It was just shy of 1,300 kilograms, they said – or about 2,900 pounds. In one morning! And they do this EVERY DAY.

Here’s a picture of Svein and the crew… 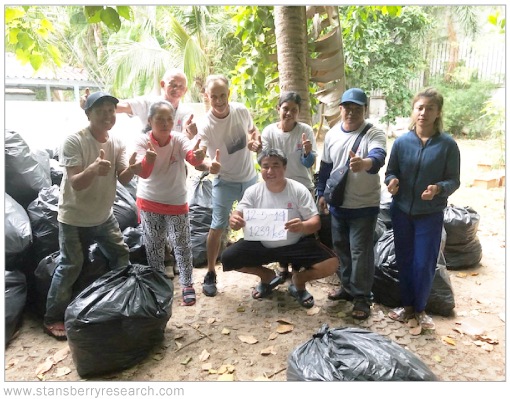 “What we don’t have time to do tomorrow, we do today,” Svein said to me – and the phrase hit me like Porter’s old saying about friends from 25 years ago.

I asked Svein if it was OK for DailyWealth readers to reach out directly to him – whether you own a company and want to “do good,” or if you just want to let him know you appreciate what he’s doing. He said he would love to hear from you. You can reach him directly at svein@star-board.com.

I hope this story inspires you, the way seeing it firsthand inspired me…

What can one person do to help solve a seemingly insurmountable problem? Just do something – and lead by example. Be like my friend Svein… and soon enough, the people around you will be inspired to do a little more.

Signing off from Thailand,