Discovery (Nasdaq: DISCA) – is a worldwide media company that operates television networks such as Discovery Channel, TLC, Animal Planet, Food Network, and  HGTV. The company operates through two segments: U.S. Networks and International Networks. The company was founded in 1985 and it is headquartered in Silver Spring, Maryland.

Unlike many companies, Discovery has not seen a slowdown in its earnings growth over the last few quarters. The company has seen earnings grow by an average of 14% per year over the last three years, but the most recent quarter showed growth of 60% on a year over year basis.

Sales have grown at a rate of 20% per year over the last three years and they grew by 17% in the first quarter.

In addition to the earnings and sales growth, the company’s management efficiency ratings are really good.

Despite the strong fundamentals, the sentiment toward the stock is anything but bullish.

There are 27 analysts following the stock at this time.

Analysts aren’t the only ones that are bearish either. The short interest ratio is currently at 7.44 and that is the highest reading since mid-January. 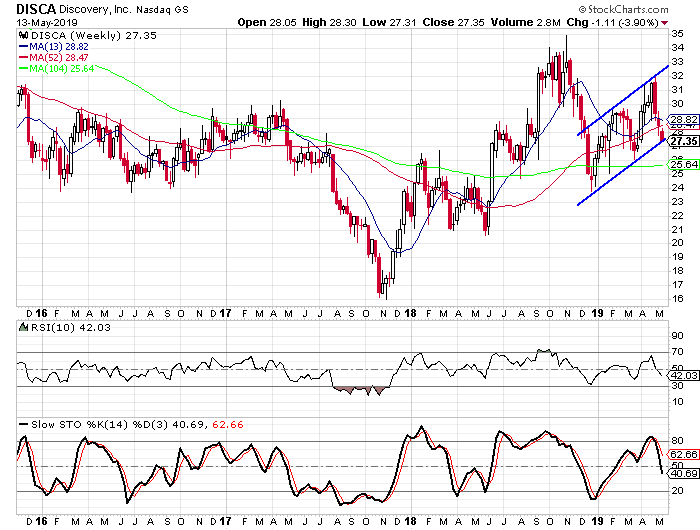 We see on the weekly chart that Discovery has been trending higher since late December. That is a pretty common pattern, but something different about this stock is that it dipped in late March and that helped form the lower rail of an upward sloped trend channel. The stock has dipped again in the last few weeks and that has brought the stock back down to that lower rail.