In most cases, trying to pinpoint the best entry spot into a new position is a lost cause.

Either a stock doesn’t ebb and flow predictably enough, or waiting ends up meaning a trader ultimately misses out on gains. The market’s very best stocks have a knack for making prolonged rallies, never pulling back and opening a window of opportunity.

There are exceptions, however. That is to say, some stocks are forever rising and falling in a pattern, making long-term net progress, even if not rising in a straight line.

To that end, here’s a rundown of the market’s best stocks to buy on a decent dip.

They’re not necessarily ripe for a purchase right now, but they each sport enough long-term momentum and the right fundamentals to recover from a future stumble as well as they have in the past. 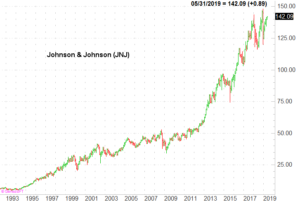 Johnson & Johnson (NYSE:JNJ) stock may not always soar to higher highs. But, even when the market environment is lousy and the economy is in shambles, JNJ stock finds a way of hammering out some degree of progress. Its stumbles are always short-lived before yielding to a move above its prior peak.

That persistence has everything to do with the nature of its business. Johnson & Johnson sells a mix of prescription drugs, over-the-counter drugs like Tylenol and Zyrtec and a variety of medical equipment. Its top and bottom lines don’t move in a perfectly straight line, but they broadly move higher all the time.

There is a catch with JNJ stock, however. While it can and usually does recover pretty quickly, there’s no rhythm or pattern to its pullbacks and rebounds. 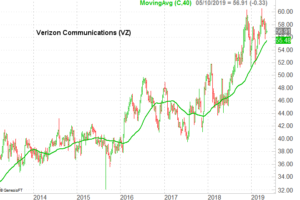 The telecom industry is changing. It’s getting tougher to be in, as the lines between phone and video — and now entertainment — continue to blur.

Nobody knows that better than the chiefs at Verizon Communications (NYSE:VZ), which acquired a struggling Yahoo with plans to use that as a springboard into the streaming video arena. It has not worked out very well, with the company writing down $5 billion last year to adjust for the deteriorating value of its Yahoo and AOL properties.

Unlike its biggest rival AT&T (NYSE:T), however, Verizon hasn’t taken on too much outside of the telecom realm. Revenue growth has been surprisingly steady, even if income growth hasn’t been quite as consistent. It’s the erratic bottom line largely responsible for the pullbacks the stock has been dishing out since 2010.

Take a closer look at those lulls though. Just when it looks like the stock’s never going to recover, it does. 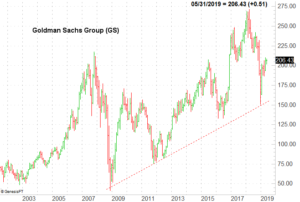 Goldman Sachs Group (NYSE:GS) used to be a titan, and arguably the premier name in the investment banking business. That’s not the case anymore. Through a combination of more competition and a lack of effective focus, Goldman lost a step.

Investors have taken notice. It was earnings lulls that largely drove the 2011, 2015 and 2018 setbacks for GS stock. Those were big selloffs too. Last year’s tumble was almost a 50% meltdown from peak to trough.

Those troughs have been great buying opportunities though, since if nothing else, Goldman Sachs can lean on its pedigree while it regroups to restore earnings growth. There’s also a support line that appears to be playing a role in the stock’s recoveries now. 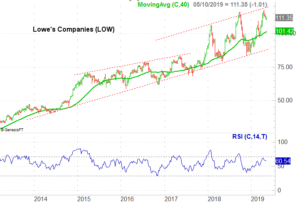 Hardware store chain Lowe’s Companies (NYSE:LOW) has always played second fiddle to bigger rival Home Depot (NYSE:HD), and perhaps hasn’t performed as well as it would have liked because Home Depot was forever standing in the way.

The second-biggest home improvement retailer is no slouch, however. As long as the economy and housing market are on solid footing, Lowe’s is growing too, securing its spot on a list of the best stocks to buy on a dip.

The weekly chart of LOW confirms it. The weekly chart also makes clear that this particular stock ebbs and flows in a rhythm, and more often than not, it turns around when it bumps into previously established support and resistance lines. 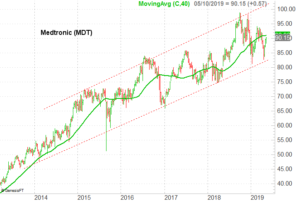 Medtronic (NYSE:MDT) makes and markets a variety of medical devices, ranging from pacemakers to dialysis catheters to electrosurgical instruments.

Yes, as was the case with Johnson & Johnson, Medtronic’s business is reliable from one quarter — and one year — to the next. The tradeoff is, red-hot growth is incredibly unlikely.

It’s a dynamic investors generally have a tough time remembering, given the stock’s up-and-down action. The market will bid it up to unsustainable values, and when they correct that move, they overdo the downturns as well. The end result is a relatively well-established zig-zag pattern that since 2015 has been framed by equally well-established support and resistance lines.

It looks as if MDT shares just pushed up and off the lower boundary of that rising trading range. 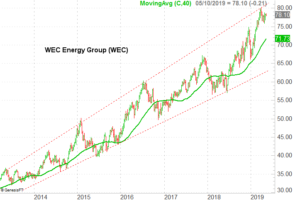 There’s rarely a bad time to own a utility stock. While they offer little in the way of growth, they offer much in the way of consistency. They’re also solid dividend payers, even if they rise and fall like bonds when interest rates fall and rise.

WEC Energy Group (NYSE:WEC) isn’t an exception to that norm.

Yes, it’s a bit off the radar. WEC Energy serves only 4.5 million customers in Wisconsin, Illinois, Michigan and Minnesota.

That obscurity is the edge investors have, however. It’s not overwatched and overinvested the way bigger names like Southern Co (NYSE:SO) and Duke Energy (NYSE:DUK) are. That dynamic allows it to move without an unnatural level of buying and selling pressure; instead, moving back and forth in a well-established pattern clearly framed by support and resistance levels. It just bumped into the upper boundary of that ceiling, so investors looking to step in will probably have to wait a while. 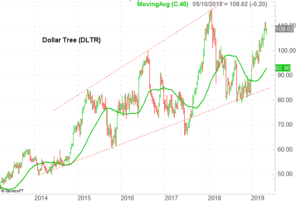 That has not necessarily been the case though. In fact, there has been no apparent link to the economy in a long time for DLTR stock. It just moves higher in any kind of environment, in step with unfettered sales and earnings growth.

Last quarter’s slight sales lull is the first time since 2014 the top line has shrunk. Before that, it hadn’t happened since the end of 2007. That consistency is the key reason DLTR has earned a spot on a list of the best stocks to buy after a pullback.

Just for the record, however, the pullbacks Dollar Tree shares are dishing out on a regular basis are uncomfortably big. The trip from the upper edge of a long-term trading range to the lower end of that range last year cut DLTR by about a third of its value. 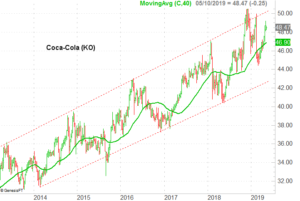 Consumers may be steering away from sugary sodas, but that’s hardly all Coca-Cola (NYSE:KO) is anymore. Dasani water, Honest T tea and Zico coconut water are just some of its healthier options that consumers are clamoring for these days.

That diverse product lineup is a key reason the company’s sales and earnings have been predictable, even if not always moving forward.

The beverage business runs (no pun intended) hot and cold, and that can push KO stock higher and lower by quite a bit.

Take a step back and look at the weekly chart though. You’ll find that what feels like sizeable pullbacks at the time ends up being opportunities to step into a long-term uptrend right as the lower boundary of a rising channel is met. 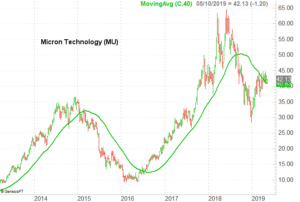 Shares of Micron Technology (NASDAQ:MU) ebb and fall regularly too, but their cycle can take an agonizingly long time to complete. Whereas other names that make for great “buy on a dip” prospects may peel back for a few weeks, Micron shares can slide for over a year.

In every case so far, though, the recovery has more than offset the setback.

The cycle in question is neither a psychological nor an economic one. It’s a tech-based one. The computer memory market is in the nasty habit of over-responding to rising RAM prices, creating too much production capacity that leads to a price-gouging glut. That’s what up-ended MU stock in 2018, and again last year.

The tough part about using these selloffs is being patient enough to let them run their full course before filing back in. 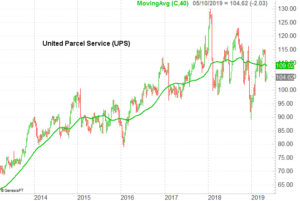 Finally, add United Parcel Service (NYSE:UPS) to your watchlist of stocks to buy after a major pullback.

UPS contends with a variety of headwinds, ranging from economic lulls to fuel prices to competitive pressures. None of them are easy, and all of them are capable of taking a toll on United Parcel Service shares with or without notice.

The weekly chart of UPS is visibly, alarmingly erratic.

Take a closer look at that chart though. While sea-sickening at times, all of the dips since 2009 have been great short-term buying opportunities. Several of them wound up being great long-term entry points. The challenge is just mustering the guts to take the swing, trusting that United Parcel Service is capable of addressing its challenges immediately after they surface. So far, it has been.