The end of April and the beginning of May isn’t just a transition from one month to the next.

Just because the broad tailwind has stopped blowing, however, doesn’t necessarily mean every stock is ready to stagnate here. It just means investors should be more selective than they might normally be.

With that as the backdrop, here’s a rundown of some of the top stocks to buy — rather than sell — as the month of May gets going.

These picks have demonstrated some sort of edge headed into this slow time of year. Either there’s budding technical bullishness in play, or extreme value, or in many cases, both. In no particular order… 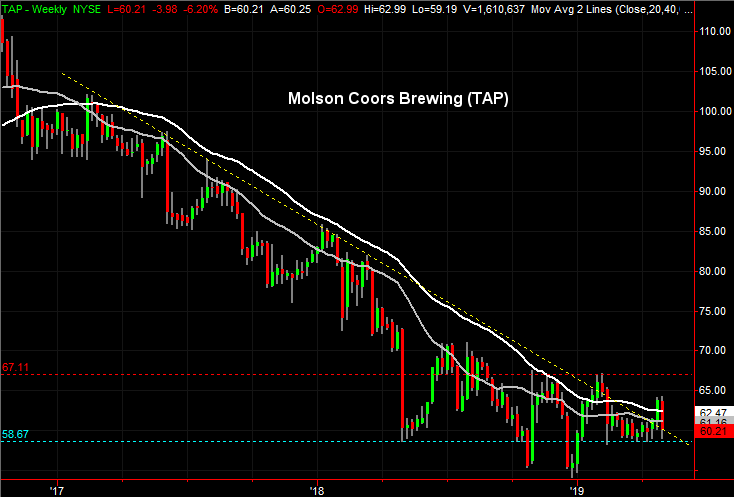 Beer giant Molson Coors Brewing (NYSE:TAP), the company behind brands like Bergenbier, Blue Moon and of course Molson, had a rough go of things between late-2016 and late 2018. All told, TAP stock fell more than 50% from peak to trough in response to a sales slowdown that ended up crimping earnings.

Challenges remain. So do doubts. Two years of misery will force a company to regroup, though, and without saying as much, enough bulls have plowed in at recent long-term lows to snap Molson Coors shares out a well-framed downtrend and back above the 200-day moving average line for the first time since early 2017.

The kicker: Revenue is expected to stabilize next year, reversing the earnings decline. That is, this year’s projected profit of $4.76 per share is forecasted to grow to $4.92 per share next year. That appears to be just enough to spur some new bullishness. 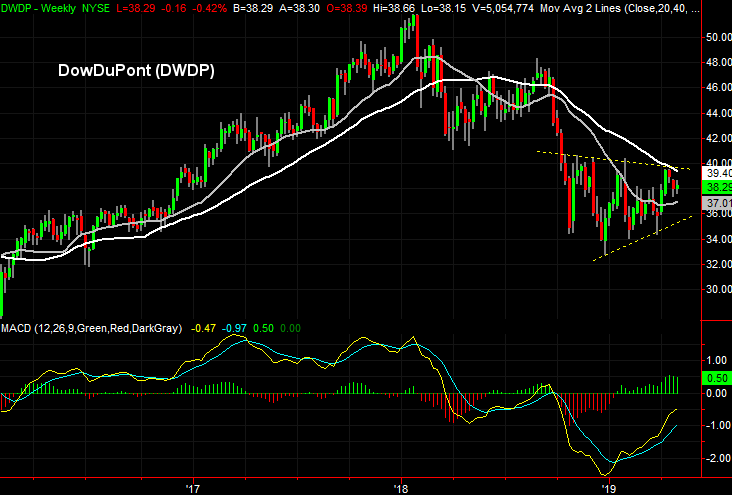 DowDuPont (NYSE:DWDP) has been through several structural shakeups over the course of the past few years, with the most recent being the spinoff of Dow (NYSE:DOW) a month ago. Come June 1, the company’s agricultural arm Corteva will also be separated from its parent.

The breakup has been inspired by the same reason for all corporate splits — as a means of unlocking value and letting each unit operate without being distracted by other unlike business arms.

In this instance, however, there’s a nuance that’s making DWDP one of the top stocks to by before or after the impending separation of Corteva. That is, traders are already starting to file back into the stock after a rough 2018, suggesting they already realize the upside of the breakup.

Take the hint at face value, particularly if DWDP shares can push above the technical ceiling waiting at $40.43. 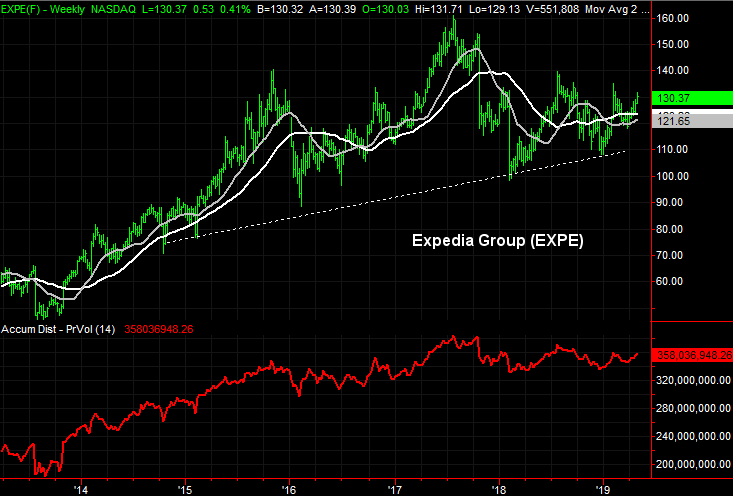 Years ago, when the internet was still young, the tourism industry struggled to connect with consumers online. Online travel arrangement middlemen like Expedia Group (NASDAQ:EXPE) filled a gap quite nicely.

That ceased to be the case a couple of year ago, however. Weary of sharing revenue with players like Expedia, airlines, hotels, car-rental agencies and everyone stepped up their online games and got serious about bypassing online travel agents. Expedia, along with Booking Holdings (NASDAQ:BKNG) and Trivago (NASDAQ:TRVG), were unable to demonstrate their actual value to the customers they were serving.

That’s starting to change, at least for Expedia, if the chart’s recent action is any indication. After a rough 2017 and 2018, we’re starting to see higher lows. Better yet, analysts anticipate revenue growth of 10% this year and next year, which should start to drive even more earnings growth now that the company has finally found its place again. 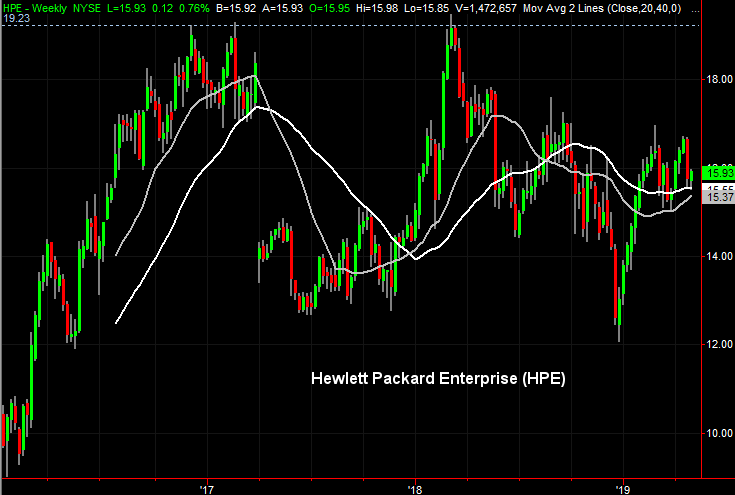 Hewlett Packard Enterprise (NYSE:HPE) is, as you’ll remember, the business side of the old Hewlett-Packard, which split from the consumer-oriented arm back in 2015.

Though “Enterprise” got off to a good start, shares of HPE stock haven’t made any net progress since August of 2016. It’s not because the company hasn’t been doing what it’s supposed to do though. While sales growth has been anemic — and will continue to be so through next year — Hewlett Packard Enterprise has been able to leverage its leadership in the hybrid cloud arena into better margins. Last year’s earnings of $1.56 per share are expected to grow to $1.65 this year, and reach $1.75 per share next year.

HPE’s hybrid cloud tech is good enough to secure Google as a business partner, setting the stage for an unexpectedly strong 2019. 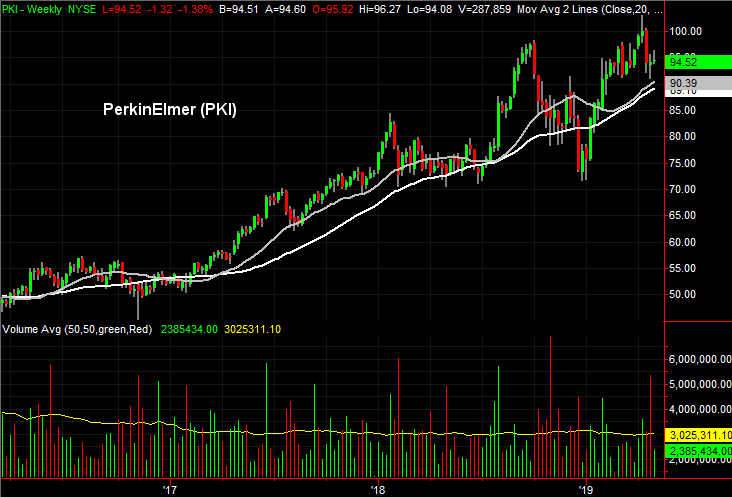 Many investors may have never even heard of PerkinElmer (NYSE:PKI). But, don’t mistake a lack of familiarity for a lack of size or strength. It’s just a name that’s doing a great deal of work behind the front lines of the healthcare world.

PerkinElmer is a diagnostics outfit, helping caregivers diagnose and identify all sorts of medical problems. The company even offers environmental and food testing solutions. It’s far from a sexy, headline-grabbing business, but it’s reliable, and PKE is one of the best stocks to buy in this uncertain environment. Much like the company’s top and bottom lines, PerkinElmer’s stock’s uptrend isn’t thwarted for very long.

The bullish case is bolstered by the recently reported first-quarter beat, which was followed by upped guidance. Even that may underestimate what’s in store, however. For the past 12 quarters, PerkinElmer has only missed estimates twice, and has beat estimates nine of those times. 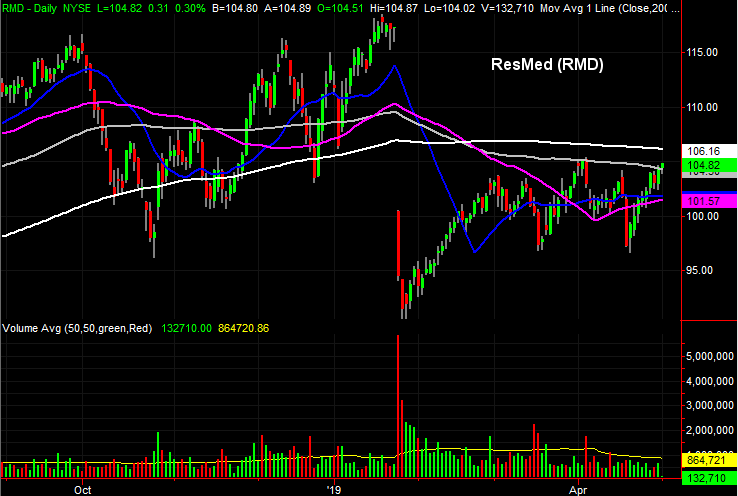 ResMed (NYSE:RMD) shares took one on the chin in January, losing 20% of its value after falling short of its fiscal Q2 revenue projection. The pros were calling for a top line of $673 million, but the company only reported $651 million.

In retrospect, however, traders appear to realize they overshot their bearish target. RMD has reclaimed nearly half of what it lost in that one rough day, and the bulls continue to test the waters of higher highs.

The pros are getting (back) on board too, with JP Morgan upgrading the stock last month, and Deutsche Bank upgrading it to a “buy” in March. JP Morgan’s upgrade in April, in fact, reversed the knee-jerk downgrade the firm dished out on RMD immediately after that ill-fated earnings report. Looking back, JP Morgan’s analysts still seem to appreciate this year’s and next year’s revenue is expected to grow by double-digits.

The kicker: This is a bullish time of year for healthcare equipment names like ResMed. These stocks gain, on average, about 5% between early March and late July. 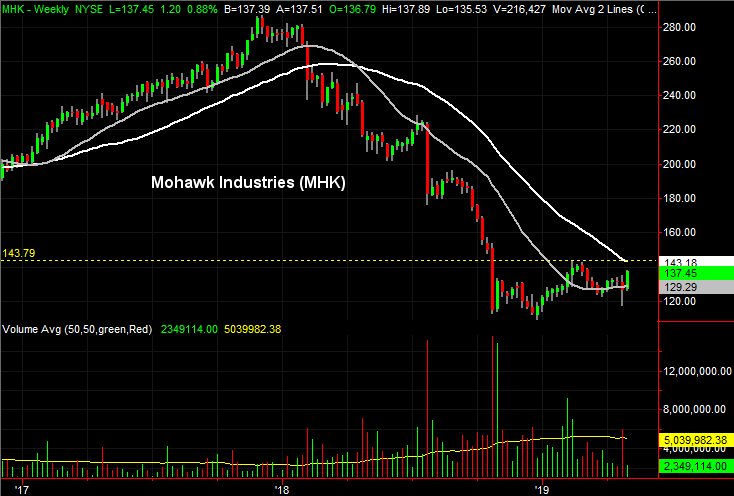 Mohawk Industries (NYSE:MHK) may not be a red-hot growth machine, but it doesn’t have to be. Priced at only 11.5 times its forward-looking profit, Mohawk is a solid value prospect.

Mohawk, of course, is the flooring company that’s been around for ages. At one time only a carpet name, it has since diversified into tile, laminate and even countertops.

Shares took a sizable tumble in 2018, falling from a high near $287 to a low around $109 in December of last year. The selloff reflected an admittedly disappointing year, marked by a sharp dropoff in revenue and earnings.

The bears arguably hit it a little too hard, though, and this week’s strong gains renew a rebound effort that got started in earnest in February. A break above the 200-day moving average line around $143 and the February high around $144.50 would seal the budding deal. 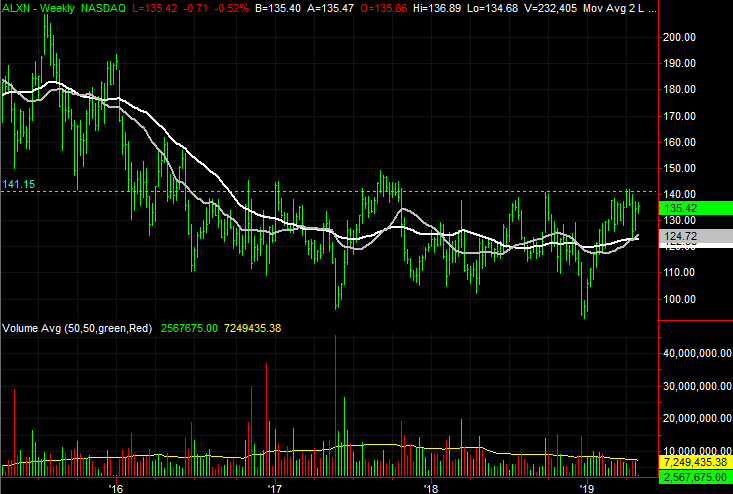 Alexion Pharmaceuticals (NASDAQ:ALXN) isn’t exactly a mainstream name, but give it time — that could change.

Alexion’s portfolio consists of four drugs, with a handful more in the pipeline. And, it’s a perfect mix. Soliris is the breadwinner, driving $3.56 billion in sales last year, but a couple of its other, smaller drug saw sales growth of 40% in 2018. The mix of stability with strong growth translates into widening margins, and this year is shaping up to be a real profit breakout. Driven by almost 16% sales growth, analysts expect per-share earnings to swell from last year’s $7.92 to $9.47.

The stock has been stuck in a sideways range since 2017, but the budding effort to break back above $141 could be catalytic. 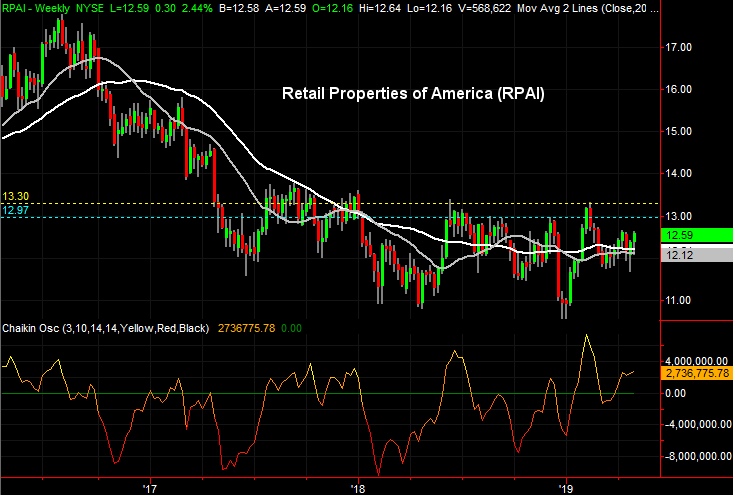 The headlines suggest the so-called retail apocalypse is in full swing. The numbers suggest otherwise. Consumer spending grew 0.9% in March, which was the best single-month improvement in almost a decade. Calm inflation and rising wages are proving to be a real boon, and with the Federal Reserve in no particular hurry to raise interest rates, real estate remains cheap and easy to finance.

Enter Retail Properties of America (NYSE:RPAI). This retail real estate investment trust (or REIT) was on its heels for the better part of 2017 and 2018, with investors concerned the company was on the wrong side of two different but related trends… interest rates and slowing retail consumption.

Now, however, the bulls are quietly toying with a turnaround. A move above the technical ceilings at $13 and then $13.30 could prove game-changing. 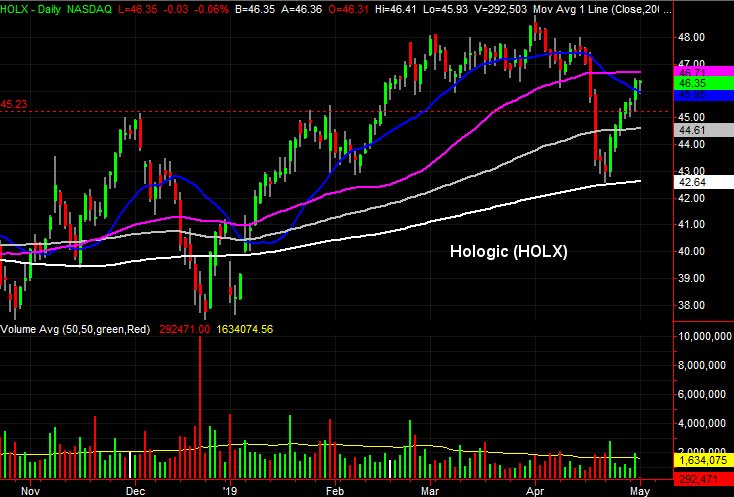 Finally, add Hologic (NASDAQ:HOLX) to your list of stocks to buy in May.

Hologic is another diagnostics and testing name. Like most other organizations in the industry, red-hot growth isn’t in the cards, but steady progress is. Only once since 2010 has the company failed to drive year-over-year quarterly sales growth.

Though not without its ups and downs, the stock’s long-term history reflects this consistency.

The action seen over the course of just the past few days, though, makes HOLX a compelling prospect right now. After rushing higher early this year and developing an overbought condition by March, profit-takers dug in. It was where and how the rebound took shape that’s telling. All it took was a kiss of the pivotal 200-day moving average line to rekindle the rally effort. The steep stumble simply hit the ‘reset’ button and cleared the decks for what could end up being a lengthy climb.

Why Covid-19 Could Send This Secret 5G "Smart Antenna" Technology Through the Roof [sponsor]
Money manager Louis Navellier says anyone who makes an informed "bet" on this "Smart Antenna" technology right NOW... could fast-track their dream retirement over the next 24 to 36 months. Go HERE for details.