We’ve seen double-digit rallies in both U.S. and foreign stocks. And the precious metals market has also started to take off.

But one market hasn’t caught on to today’s rally. Now, thanks to fed-up investors, that’s likely about to change…

Simply put, the U.S. agriculture market continues to be a poor performer in 2019. And investors are finally throwing in the towel.

This will ultimately set up a major buying opportunity, with double-digit-upside potential when the uptrend returns. Here’s why…

Agriculture isn’t an exciting market. I get it… It’s not the next disruptive tech sector that’s going to change the world.

But when negative sentiment reaches extreme levels in this market, big gains are possible. The rubber band always snaps back. And it’s stretched far right now.

This negative sentiment is starting to pile up in the agriculture space today. And we can see it through the Commitment of Traders (“COT”) report.

Today, futures traders are piling up bets against the agriculture market. We can see one example of this through the COT report for corn – one of the three most important agricultural commodities. Take a look… 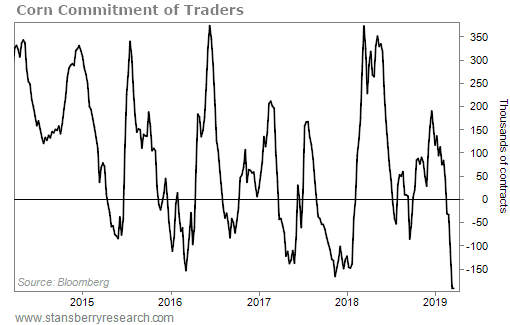 Futures traders are making large bets on lower corn prices. In fact, today’s negative sentiment is the worst we’ve seen in years. And that means higher corn prices are likely from here.

We saw similar examples in both September 2016 and November 2017. Both cases preceded rallies of 15% and 17%, respectively, over the next six months.

It’s not just corn, either. We are seeing a similar setup in soybeans. Check it out… 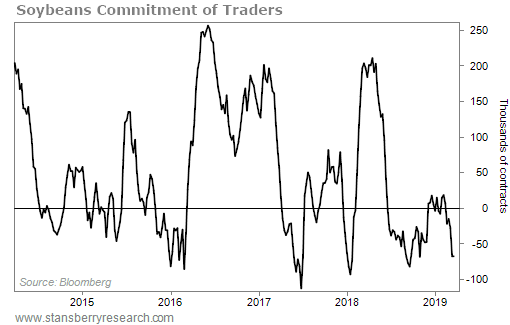 Bets on lower soybean prices are also near multiyear lows. And again, that’s a recipe for higher prices in the months ahead.

Solid returns followed similar cases in 2016 and 2017. Those both set the stage for 30% and 10% gains, respectively, in less than six months.

The last major agriculture commodity is wheat. And while wheat isn’t at multiyear hated levels right now, investors are heading for the exits. It’s just a matter of time until this commodity also reaches outsized levels of negative sentiment.

The most interesting part of all this is that investors don’t just hate one agricultural commodity today… It’s the entire agriculture market. And today’s negative sentiment is setting up a major buying opportunity.

When the uptrend returns, shares of the iPath Bloomberg Grains Subindex Total Return ETN (JJGTF) will likely be the big winner. The fund allocates 37% of its portfolio to corn, 38% to soybeans, and 18% to wheat.

When the rubber band snaps back in the agriculture market, this fund will likely lead the way.

Is It Really Possible to Retire a Millionaire on an Average Salary?