Spirit Airlines (NYSE: SAVE) – Spirit is a low-fare airline serving a limited number of markets in the U.S., the Caribbean, and Latin America. The company operates a fleet of just over 250 planes and makes approximately 600 flights per day. The company was formerly Clippert Trucking, but changed its name to Spirit Airlines in 1992. The company is headquartered in Miramar, Florida and was originally founded on 1964.

Spirit is the number one airline based on Investor’s Business Daily’s overall composite rating. That rating takes in to account the company’s earnings growth, sales growth, profit margin, return on equity, and relative price performance compared to other stocks.

Spirit’s earnings have actually declined by an average of 8% per year over the last three years, but they grew by 92% in the most recent quarter.

Analysts expect earnings to grow by 49% for the year.

Sales have grown by an average of 15% per year over the last three years and they grew by 30% in the most recent quarter.

The sentiment toward Spirit is somewhat mixed. 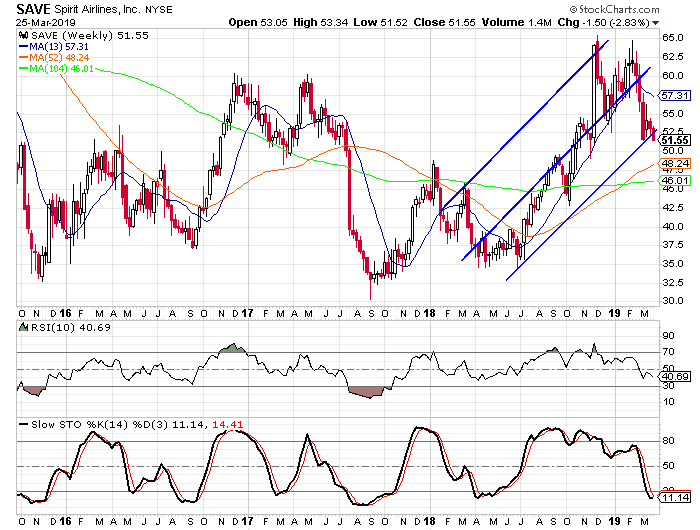 We see on the weekly chart for Spirit that the stock has been moving higher over the last nine months and there is a trend channel that has highlighted the different cycles within the overall trend. The stock pulled back in February and early March and that latest cycle brought the stock down to the lower rail of the channel.

The channel is a little different this week as I drew the middle line as a reference point. It isn’t a calculated median price over the last year, but rather I drew it freehand to mark the midway point between the upper and lower rails.