There’s no way, or reason, to dance around it.

Tech giant Nvidia (NASDAQ:NVDA) wound up as one of 2018’s biggest losers, but largely because investors were a bit too bullish on NVDA stock between early 2016 and October of last year. Reality up-ended shares once the market realized the company wasn’t bulletproof.

As is so often the case though, the pendulum that moved too far in a bullish direction has now swung too far in the other direction.

NVDA stock remains oversold and ripe for more upside, even after the gains it’s made since late December.

Let’s hope this turnaround is more reasonably paced than the 2017 rally was.

In most regards it was a perfect storm.

Flash back to 2016, and rival Advanced Micro Devices (NASDAQ:AMD) was only rumored to be working on a revitalized product lineup, artificial intelligence was just coming into its own, cryptocurrency mining was just ramping up as an industry in and of itself, and it dawned on the technoscenti that data centers needed to be reinvented from the ground up.

Perfectly positioned on all four fronts, Nvidia saw revenue grow 38% in calendar 2016, swell to 40% growth in 2017, and then expand another 20% in 2018. Nvidia stock earnings per share grew accordingly.

None of those tremendous numbers were sustainable, particularly in a cyclical arena like tech. And, Nvidia wasn’t able to keep it up.

Already standing in the shadow of a couple sequential declines in earnings, in its third quarter of 2018 the company fell short of revenue estimates. Although up 21% year-over-year, the top line of $3.18 billion missed NVDA stock analysts’ outlook of $3.24 billion.

Fanning the bearish flames that burned Nvidia stock in the wake of a lackluster third quarter report was an equally lackluster fourth quarter outlook. This year is going to extend the company’s revenue and earnings contraction.

All told, NVDA stock was more than chopped in half between its early October peak and its late December low on a shocking reversal of fortune.

It’s that shock, however, that ultimately makes a fresh investment in Nvidia stock a compelling idea now.

An inconvenient truth few investors care to concede: Perceptions about a particular company can spin out of control from time to time, driving a stock’s price far too high or far too low.

NVDA stock was no exception to that reality.

While revenue and earnings decidedly grew between 2016 and 2018, the stock’s price grew at an even faster clip. More than a handful of investors presumed all the tailwinds driving huge growth for Nvidia would last forever, without interruption.

It didn’t. It couldn’t. But, unaccustomed to red flags they hadn’t seen wave since 2015, the first sight of them sparked a panic. That panic turned into a selling avalanche, fueled by profit-taking after a quadruple-digit advance from NVDA stock’s 2015 low.

A closer look at Nvidia now, however, reveals this is still a solid company with a bright future beyond the cryptocurrency craze. 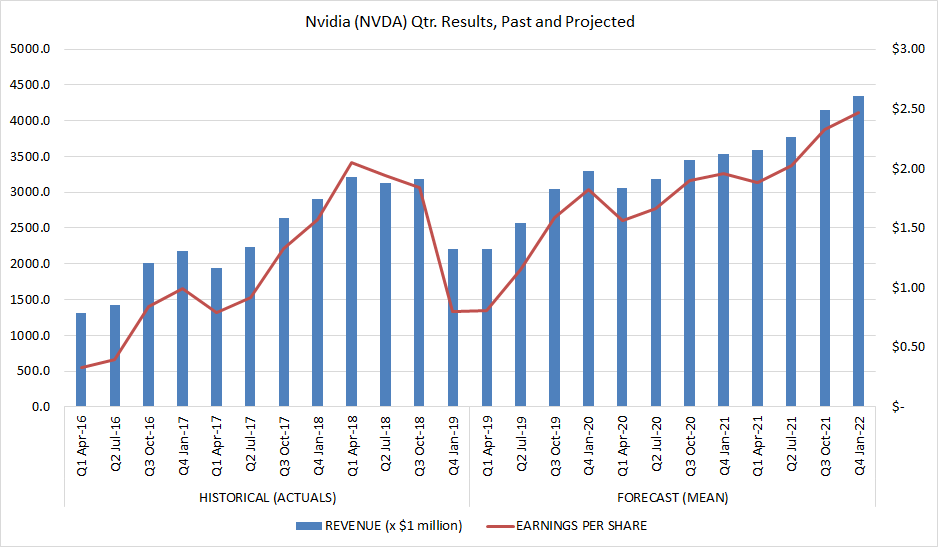 Much of that future lies in the less-volatile data center arena, and the artificial intelligence sliver of the data center market, in particular. It only accounted for 31% of last quarter’s revenue, but Q4 data center revenue drove more absolute growth than any other segment. Sales of $679 million were a $73 million improvement on the year-earlier tally.

That’s revenue which has yet to fully benefit from an overwhelming adoption of artificial intelligence, where Nvidia stands more than ready to meet the need. Nvidia GPUs power the world’s two fastest supercomputers, and its tech has been proven more powerful on the AI front than any other competitor.

Though the future looks bright, it’s admittedly a distant future.

The end of a refresh cycle in the all-important video gaming market is working against Nvidia stock in the meantime, and lines between different hardware components on mobile devices has been at least partially blurred by savvy use of software.

The company could struggle this year, as analysts widely expect. They’re specifically calling for a 5% decline in sales to lead to a 20% dip in per-share profits.

NVDA stock’s cautious 26% advance from December’s low, however, says investors are increasingly looking to 2020, recognizing that their initial expectations for 2019 were unfair.

Nvidia was riding the convergence of multiple trends, painting an unrealistic picture of what was possible in perpetuity.

The foreseeable future may not be as jaw-dropping as the recent past, but next year’s projected sales growth of 19% and an earnings turnaround certainly make Nvidia stock an interesting, risk-adjusted pick in the shadow of last year’s admittedly-deserved drubbing.