Stock-market selloffs provide great times to buy big dividends. The stock market was a relentlessly receding tide in the fourth quarter, which is bad for “buy and hope” investors but quite helpful for income specialists like us.

Let’s consider high-quality real estate investment trust W.P. Carey (WPC). This REIT looks good at most prices, but the market gave us an exaggerated dip in December-early January that spiked its yield to nearly 6.5%. Savvy, patient investors who bought on this dip (like my Contrarian Income Report subscribers) didn’t just enjoy an excellent yield on the higher end of its five-year range – they also are sitting on 17% gains in just a matter of weeks!

W.P. Carey (WPC): Why It Pays to Wait for Dividend Deals 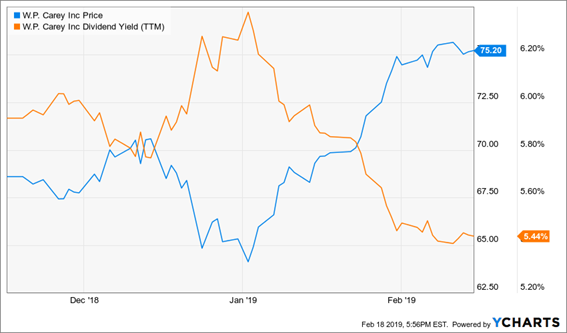 The problem for bargain hunters right now is that the market’s red-hot 2019 recovery has brought many stocks back to the bloated valuations they traded at before the fourth quarter provided a little valuation relief.

In fact, we’re still in the midst of one of the most expensive markets ever.

But there are a few deep values left in this marked-up market. A few stocks I’ve been monitoring have been pared by between 25% and 65% in less than a year. And as a result, these battered dividend plays, which typically yield 3%-4%, are dishing out yields between 5.3% and 6.6%!

That’s good. Plus these deep discounts also mean there’s potential for short-term pops of 20% or more.

Of course each of these firms has business hurdles to overcome. Let’s dig in to dividend stock bargain bin:

REITs have held up pretty well over the past half-year or so, which makes timber real estate play Weyerhaeuser’s (WY) performance since July stick out like a sore, black-and-blue thumb.

Weyerhaeuser (WY) Has Been Taken to the Woodshed 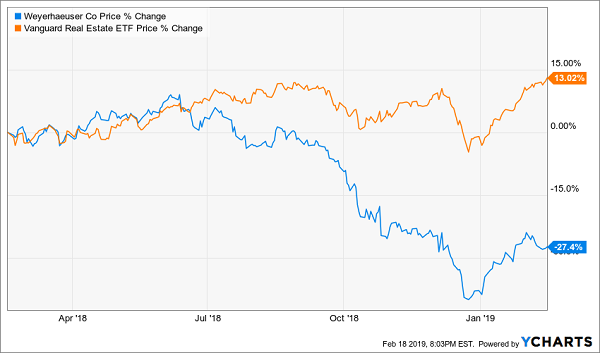 The primary tailwind on Weyerhaeuser? The Fed.

In short, the Federal Reserve’s ramping up of interest rates finally started to weigh on the housing market in a big way, which in turn finally popped a bubble in lumber prices that had been keeping WY aloft. 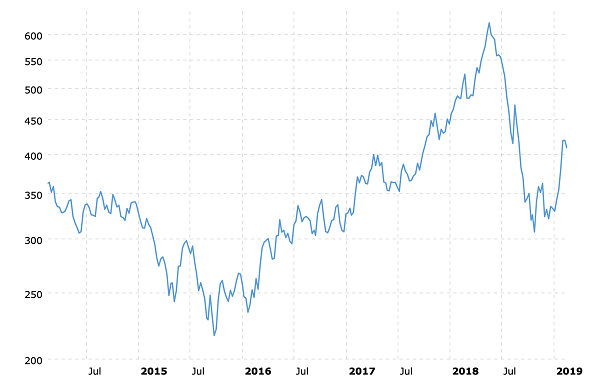 There are a few things to like about Weyerhaeuser. Timber is a very niche REIT realm, providing some serious diversification, and the company has been a beacon of dividend growth, upping its annual payout every year since converting into a real estate investment trust in 2010.

And prior to its lumber-related plunge last year, it had outperformed the Vanguard REIT ETF (VNQ) by 135% to 86% on a total return basis over the past decade.

But is WY a value?

While lumber prices appear to be stabilizing, they’re still doing so at levels considerably lower than their 2018 highs.

Moreover slower rate hikes from the Federal Reserve will take a little pressure off the housing market.

But the data is still grim.

November housing starts (the last available data thanks to the temporary government shutdown) showed single-family starts at a 1 ½-year low. Third-party gauges for December activity, namely permits, also were in a downtrend.

The dividend is a potential problem, though. Weyerhaeuser did improve the payout again last year, in August, by 6.3%. But the company paid out $995 million in dividends against $748 million in profits last year, and its projected annual payout of $1.36 per share in 2019 is far more than analysts’ expectations for 83 cents in profits.

This could be a short-term bump in the road, but the path out isn’t clear yet. That, combined with the dividend situation, makes WY look less like a value, and more like a high-yield value trap.

Tailored Brands (TLRD) isn’t a familiar name outside the investing space, but most people will know its two primary brands: Men’s Wearhouse and Jos. A. Bank. The men’s suit stores engaged in a nasty bout of M&A maneuvering starting in October 2013 before eventually completing a merger in June 2014. Men’s Wearhouse switched to a holding-company structure in January 2016, adopting the Tailored Brands moniker in 2016.

Shares have been bludgeoned over the past year, losing roughly two-thirds of their value since May 2018. Some of the biggest hits included disappointing same-store sales growth in June, a report in December that Men’s Wearhouse traffic was sliding (thanks to several factors, including increased competition from the likes of Bonobos) and another report in January in which the company lowered its fourth-quarter guidance on weakness at Jos. A. Bank.

For one, the yield on TLRD is now well north of 5%, which is on the very high end of its range since the merger. But despite the company’s woes, it will pay out just 32% of its expected full-year earnings ($2.28 per share) in dividends. In short, the payout is extremely safe for a company that has been trounced so hard. 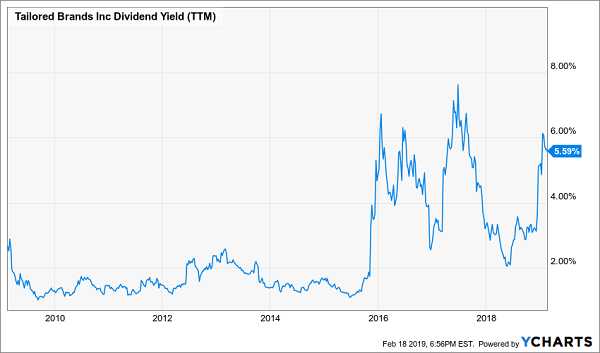 At the same time, TLRD is making strides on paying out its debt. The stock also is a deep value at these levels, trading at just five times future earnings estimates. And despite its woes, analysts still see the Tailored Brands averaging high-single-digit profit growth over the next half-decade.

But cheap stocks can get even cheaper.

Tailored Brands warned significantly on comps, but said it wasn’t sure why they had weakened so much. They’re so much of an outlier compared to past quarters, in fact, that this could just be a blip on the radar. If so, TLRD could be a dividend-and-value double play. But if this is a glimpse into a shift in consumer tastes, Tailored Brands will be forced between a rock (falling sales) and a hard place (returning to deep discounts, slicing margins).

I’ve warned about the long-term difficulties facing cigarette maker Altria (MO) for some time – namely, that the U.S. is in a never-ending crackdown on cigarettes, threatening the company’s core business. Shares have indeed been caught in a downward trend since 2017, but reality really started to catch up with Altria in Q4 2018, as shares plunged far deeper than the broader market. Now MO sits about 15% lower than where it was the last time I cautioned my readers on the stock.

Wells Fargo seems to think so. Analyst Bonnie Herzog, who rates the stock “Outperform” and has a $65 price target that implies 33% upside from here, doesn’t see any end to Altria’s decline in cigarette sales. But she does think vaping might be the company’s savior, pointing to the company’s $13 billion, 35% stake in e-cigarette maker Juul, announced in December. The money quote:

“One of the key points that continues to be misunderstood, in our view, is that while MO’s cigarette volumes will likely decelerate faster…, the incrementality from MO’s stake in JUUL — strong U.S. share/margin growth and huge upside internationally — is underestimated since we predict MO’s equity income from JUUL will more than offset MO’s shrinking cigarette volume pool.”

And like Tailored Brands, Altria is at least showing big value-and-income numbers. Its yield has plumped up to north of 6%, and its forward P/E of 11 is well, well below the market average. 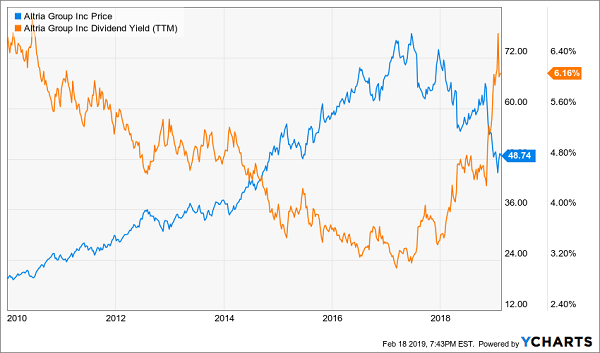 Credit where credit is due: Altria isn’t sitting around praying that cigarette sales will magically recover. The investment in Juul was a pricey risk, but one the company needs to take if it wants to stave away irrelevance as its core product deteriorates into a pile of legislative ash.

That said, Juul isn’t immune from the same pressures. The company faces class-action lawsuits in Philadelphia and New York federal courts over the company’s marketing tactics and over its disclosure of nicotine levels. Juul also temporarily halted sales of most of its flavored nicotine pods in November in hopes of getting out in front of aggressive federal regulators worried about spiking e-cigarette use.

If this sounds familiar, it should. This is the same treatment cigarettes have gotten for years … and why Altria still could be in trouble long-term despite its creative wheeling and dealing.

Live Off Dividends Forever With This “Ultimate” Retirement Portfolio [sponsor]

If you’re mapping out a successful retirement portfolio, these three stocks illustrate the right idea: high yields with price potential. We all know you need enough income to cover all of your regular expenses, but investors often overlook the importance of growing their nest egg in retirement – that way, if the unexpected happens, you won’t cripple your dividend-producing potential to dig out of trouble.

But you also need security – and you can’t do that by taking flyers out on deeply troubled stocks like the three picks I just covered.

You need quality. And that’s what the “triple play” stocks in my 8%-yielding “No Withdrawal” retirement portfolio have to offer.

They also offer more income, more dividend growth – which makes sure that inflation doesn’t eat away at your cash payouts over time – and capital appreciation potential of up to 15% annually!

Have you looked at the financial media’s countless lists of “Best of 2019” stock picks? They’re jam-packed with the same old tired blue-chip stocks they recommend year-in and year-out.

I did a quick analysis of one “pro” set of picks and calculated a likely total return of just 4% annually, based on so-so dividends and potential share appreciation from paltry estimated earnings growth. Those kinds of returns will force you to bleed your nest egg dry just a few years after you retire.

You worked too hard for decades just to struggle financially in your golden years.

My “No Withdrawal” portfolio is an all-star cast of stocks that will deliver an average yield of 8% that will also grow your nest egg – an important aspect of retirement investing that most other strategies leave out. But if disaster strikes and you have to take a chunk out of your nest egg, you’re also taking a chunk out of your income potential.

This diversified set of picks features the best of several high-income assets. Of course, only a handful of stocks and funds meet my rigorous standards for this multipurpose strategy. But the result is an “ultimate” dividend portfolio that provides you with …

This portfolio will let you live off dividend income alone without ever touching your nest egg. You won’t have to worry about paying the mortgage or other monthly bills, nor will you have to wonder how you’ll survive if a financial disaster strikes.

Let me show you how to secure the comfortable retirement you’ve worked your tail off to enjoy. Click here and I’ll provide you with THREE special reports that show you how to build this “No Withdrawal” portfolio. You’ll get the names, tickers, buy prices and full analysis of their wealth-building potential – and it’s absolutely FREE!