Gold gets the glory. It’s what everyone thinks about when they hear “precious metals.”

But does gold deserve this top spot? More specifically, does it deserve it right now?

History proves gold can be a store of value, a currency for trade, a flashy kind of jewelry, and a last resort when a crisis unfolds.

It’s darn important to how our economy functions… But it’s not the only precious metal out there.

We’ve written a lot recently about the opportunity in gold. But other precious metals are primed to rise as well.

In fact, based on history, gold could actually underperform another precious metal this year.

Gold and silver serve different purposes. Silver is a great conductor, so it has real industrial uses. Gold is mostly used in jewelry.

Still, both have use as a store of value. And that means that over time, we should expect the price of gold and silver to stay somewhat in line with each other.

It’s a simple way to know when gold trades at a high premium to silver. And it’s where today’s opportunity comes from.

Today, gold trades for the highest premium to silver since 1993. The premium has only been this high a few other times since 1980. You can see it in the chart below… 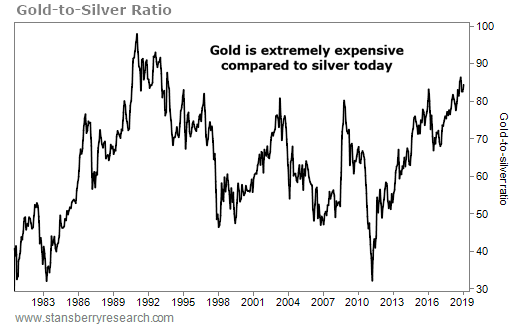 The recent gold rally pushed this premium near record levels. The ratio of gold to silver is drastically stretched.

Silver is at a multidecade low compared to the price of gold today. And that means that while gold should do well, silver will do even better…

Silver rallied 50% from February 1993 to February 1994… an incredible one-year run. And it crushed gold in the process.

It’s worth noting that gold also performed well in all three cases. So while silver could be the biggest winner, we have no reason to worry about gold, either.

I expect both metals to have a solid 2019. And silver – at its cheapest level compared to gold in nearly three decades – is poised for the biggest gains.

Most folks don’t want to think about silver. Gold gets all the glory in the precious metals universe. But ignoring silver would be a big mistake right now.

History says we could see major outperformance in silver this year. I urge you to check it out now.