During the fourth quarter of 2018, stocks were volatile and occasionally in free-fall thanks to overblown fears about a U.S. economic slowdown and further Federal Reserve rate hikes.

That is Warren Buffett’s favorite kind of stock-picking environment.

The Oracle of Omaha loves to scoop up high-quality stocks at a discount when Wall Street is in panic mode, and it’s fair to say there was quite a bit of chaos toward the end of 2018.

In addition, Berkshire Hathaway (NYSE:BRK-A) (NYSE:BRK-B) ended the third quarter with more than $100 billion in cash on its balance sheet, so Buffett and his team had plenty of funds available.

That combination of factors led to quite a bit of speculation about what Warren Buffett was buying and selling in late 2018.

Well, we got our answer, and for the most part, it was a surprisingly inactive quarter for Berkshire in terms of stock purchases.

There were a few interesting transactions to mention, however, so here’s a rundown of what Buffett and Berkshire’s stock-pickers bought and sold during the volatile fourth quarter.

Here’s what stocks Berkshire added during the fourth quarter 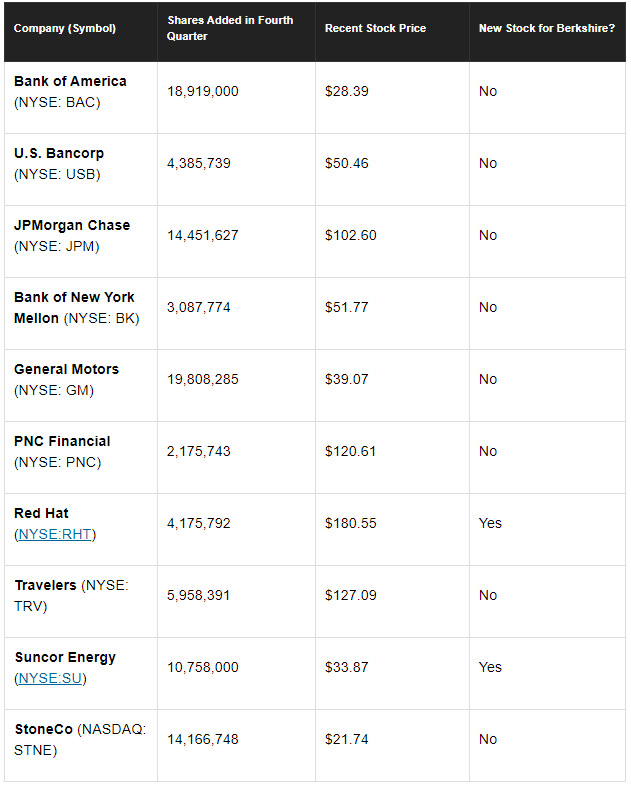 By Berkshire’s standards, this wasn’t an especially active quarter. In fact, these buying transactions “only” add up to about $5.6 billion, based on current share prices. That’s by far the lowest total for Berkshire in some time.

Even so, there are a few key takeaways:

Here’s what Buffett and his stock-pickers sold

Buffett’s style is buy-and-hold investing, having said many times that he looks for companies that could be in Berkshire’s portfolio forever. However, it’s important to realize that Buffett makes no commitment to hold any specific stock for any length of time. Berkshire actually sells stocks from its portfolio quite often for a variety of reasons — this quarter was no exception. In fact, Berkshire’s sales for the quarter were (arguably) more interesting than its buying activity.

With that in mind, here’s what Berkshire sold during the fourth quarter of 2018: 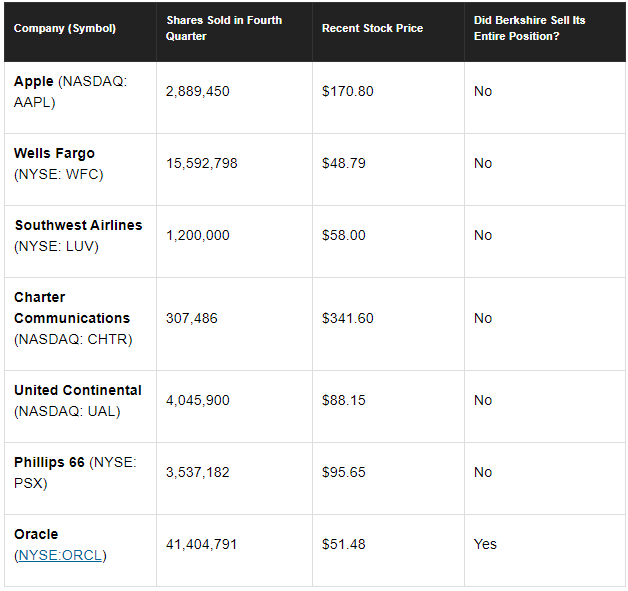 By far, the biggest news here is that Berkshire unloaded its entire $2.1 billion Oracle stake that it had just purchased during the third quarter. At this point, it’s unclear why Berkshire made the move, as such a quick trade seems quite uncharacteristic for Buffett and his stock pickers.

Another surprise is that Berkshire sold some of its massive Apple stake. To put it in perspective, this represents a reduction of about 1%, so don’t read too much into it. Still, it’s a surprise after Berkshire’s string of big buying transactions in the iPhone maker.

One major buy could be yet-to-be-revealed

It’s important to remember that Berkshire modified its buyback program in 2018 to essentially allow Buffett and Vice Chairman Charlie Munger to buy back stock anytime they agree that it’s a good idea.

Although Berkshire’s 13-F filing just showed us Berkshire’s stock portfolio changes, the company’s earnings release (and Buffett’s much-anticipated annual letter) won’t be revealed until February 23. So, we won’t find out if Berkshire took advantage of the dip in its own stock price until that time.

Will investors be happy with Berkshire’s stock portfolio activity?

Investors are likely to have mixed reactions to Berkshire’s buys (or more specifically, the lack thereof). With over $100 billion in cash and a volatile fourth quarter, many investors — myself included — expected Buffett and company to go on a buying spree. Now that we know that didn’t happen, it’s likely that Berkshire’s cash hoard has started to grow again, disappointing investors who would rather see the conglomerate put its money to work.