With a market cap of less than half of a billion dollars, odds are good most investors have never even heard of Daqo New Energy (NYSE:DQ).

Don’t be distracted by its obscurity though.

This Chinese company is an increasingly important part of the future of solar energy worldwide, and though volatile, DQ stock may be worth the risk.

And Daqo New Energy stock just stumbled into an ideal “not too hot, not too cold” zone that makes its price palatable to anyone who missed out on January’s surprise rebound.

That difference hasn’t always mattered to traders, albeit for good reason. The fate of DQ stock is closely linked to that of solar panel manufacturers and installers because demand for solar power drives demand for the silicon-based components needed to make them.

In this case, however, broad categorizations have done a disservice to Daqo New Energy stock.

The polysilicon business, though it ebbs and flows with ever-changing price of solar power, has proven to be a consistently profitable one for Daqo. Sometimes that profitability has been paper thin, like 2015’s earnings of $1.24 per share of DQ stock. But two years later, on the heels of revived solar demand and the introduction of next-generation technologies, Daqo New Energy earned a whopping $9.11 per share. Analysts expect earnings to normalize in 2019, with profits currently modeled at $4.26 per share.

From one year to the next, though, DQ knows it can count on some measure of profitability.

Investors can count on the same, but by and large the market has only discounted Daqo New Energy stock. It’s not given it credit, even when and where it can. End result? Daqo New Energy stock is now trading at a dirt-cheap price/sales ratio of only 1.2, and a trailing P/E of only 7.2.

However, investors are now acting as if they’re willing to correct their mistake.

DQ Stock Is Over a Key Technical Hurdle

It’s difficult to pinpoint the reason for last year’s weakness and January’s rebound in DQ stock. Certainly strained trade relations between the U.S. and China played a role. The changing dynamics of the solar power market itself — such as subsidies, prices, etc. — have likely played a role as well.

The reason, or reasons, however, became mostly irrelevant last week when DQ stock hurdled its 200-day moving average line, plotted in green on the daily chart below. 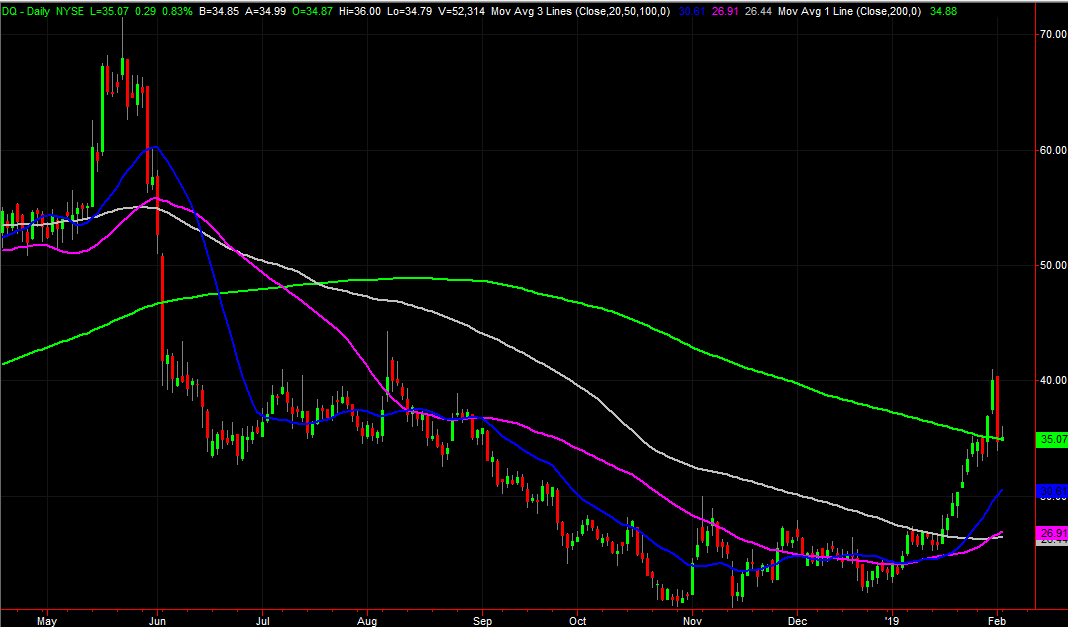 Yes, the stock took a sizeable tumble on Friday, losing nearly 14% of its value and calling the budding uptrend into question. Take a closer look at the chart though. The bulls held the line at the 200-day moving average on Friday, and they’re still doing so as of Monday. That’s huge.

And in some regards, the big setback on Friday did would-be buyers a favor. DQ stock had worked its way into an overbought condition through Thursday of last week, setting up a sizeable selloff. The dip has burned off that froth, setting the stage for another wave of bullishness.

DQ stock still just a trade to be sure, with all the potential trappings thereof. Ideally, we’d see a push up and off the 200-day moving average line to confirm the rally is still intact and has the support it needs.

This is a good start though. The bulls are holding their ground right where they’ll find the most help, and we’ve seen a couple bullish crosses of other moving average lines. Underscoring it all is deep value that the bears are increasingly struggling to justify… particularly given solar power’s 2019 outlook. In fact, Credit Suisse names Daqo one of its top solar picks for the foreseeable future, ready to capitalize on renewing demand in China, and elsewhere.

The next upturn from Daqo New Energy stock could mark the beginning of another rally effort.