Old Dominion Freight Line (Nasdaq: ODFL) – Old Dominion is transportation company that specializes in less-than-truckload (LTL) motor carrier. The company operates in the United States and Canada and it provides regional, inter-regional and national transportation to clients. The company owns over 8,000 tractor trailers and operates 228 services centers. The company is headquartered in Thomasville, North Carolina and was founded I 1934.

Old Dominion has seen tremendous earnings growth in recent years and it is expected to show strong growth in the current year. Over the last three years the company has averaged EPS growth of 20% per year. In the most recent quarter the company saw earnings grow by 71% and analysts expect growth of 65% for 2018 as a whole. The company is scheduled to report Q4 FY2018 earnings on February 7.

Sales haven’t grown as much as earnings, but the company has seen steady sales growth as well.

In the last three years the average annual growth rate has been 9% and sales increased by 21% in the third quarter.

In addition to the tremendous earnings growth and the solid sales growth, the management efficiency measures are above average.

The profit margin comes in at 17.1% and the operating margin stands at 19%.

The short interest ratio on the stock is also higher than it should be, at least in my opinion. The current reading is at 5.56 and that could help drive the stock higher if the short sellers have to cover their position. 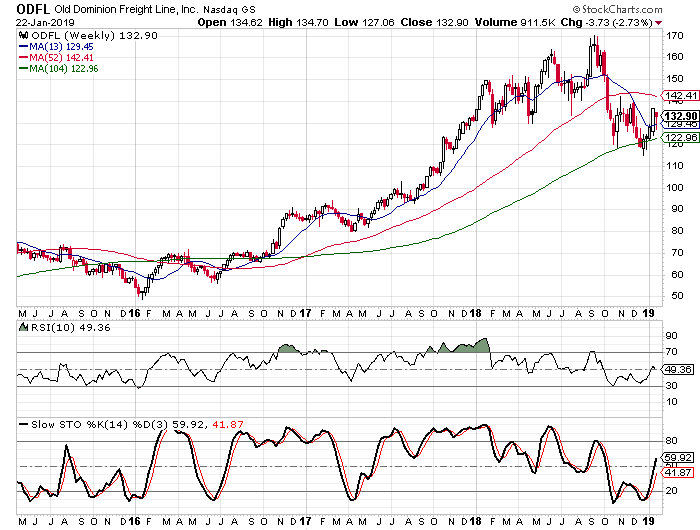 We see on the weekly chart that the stock fell down below its 104-week moving average in mid-December but has since rebounded. The last time the stock dipped below the moving average like that was in the third quarter of 2016 and the stock rallied from the $70 area and doubled in just over a year.