These are truly exciting times for precious metals.

The price of silver has been performing exceptionally well, especially since late December.

That’s when silver prices embarked on a string of higher closes for seven consecutive days.

In the past, moves like this have proven themselves to be a strong signal that further rallies lie ahead.

Remember, trends in motion tend to stay in motion. So this can be significant for the silver price going forward.

Last week, I said I think silver has embarked on a short-term consolidation. Since then, the price of silver has in fact moved sideways.

But given its recent price action and momentum, silver actually looks like it’s building energy before its next rally higher.

I’ll explain to you why I’m quite certain silver is back in bull mode, and I’ll give you three ways you can play its upside from here.

Here’s How the Price of Silver Is Moving Now

Silver has spent the better part of the past week and a half consolidating. It’s been digesting the hefty gains it made in the last week of 2018 and first week of 2019.

The precious metal labored against stocks, which managed to climb on balance last week, helped by a decline in fear which has translated into lower volatility.

Its other challenge was the dollar.

The DXY consolidated high on Tuesday, Jan. 8, around 95.9. But by 9:45 a.m. on Wednesday, the DXY dropped as traders began weighing odds that December Fed minutes would show a dovish stance. That was confirmed, pushing the DXY to 95.2, then lower to a “test” of 95 late that evening. 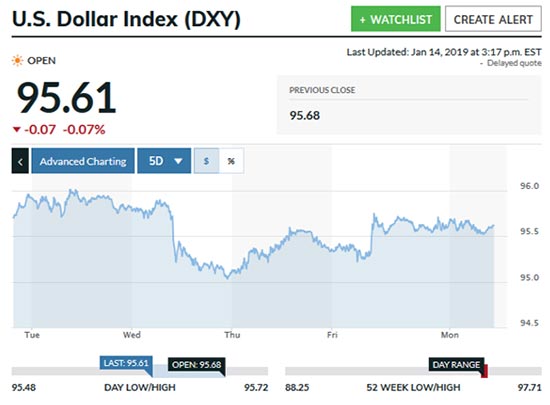 By Thursday, the dollar index clawed back some of those losses to regain 95.5, then on Friday enjoyed another slight bounce to 95.6, where it spent most of Monday as well.

Now, here’s where I see the price of silver heading from here in 2019…

Here’s Where the Price of Silver Is Headed Next

Despite a small bounce in the last few days, the DXY’s price action does not look encouraging for bulls. 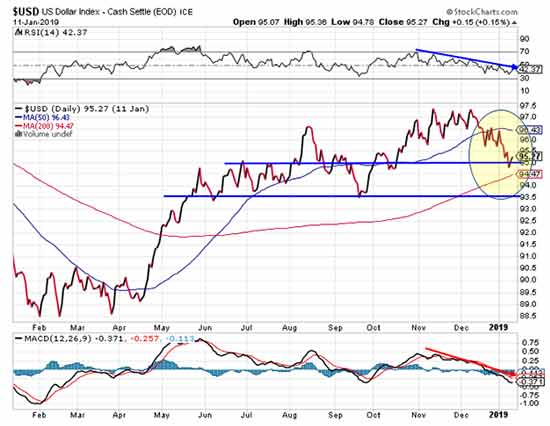 The DXY is clearly below its 50-day moving average, though it may be finding some support at the 95 level, which has acted as resistance several times between June and September.

A break below 95 for the index should lead to a quick test of 94.5, the current 200-day moving average. It wouldn’t surprise me to see that level provide at least temporary support, as it’s a major obstacle. We may even see the DXY trade in a range around 93.5 to 95 before eventually dropping below 94.5 in a more permanent fashion.

It’s also possible the DXY will trade right through the 94.5 level, at which point I’d expect to see previous support, 93.5, act as temporary support once again.

As for silver, the precious metal is looking quite convincingly back in bull mode. 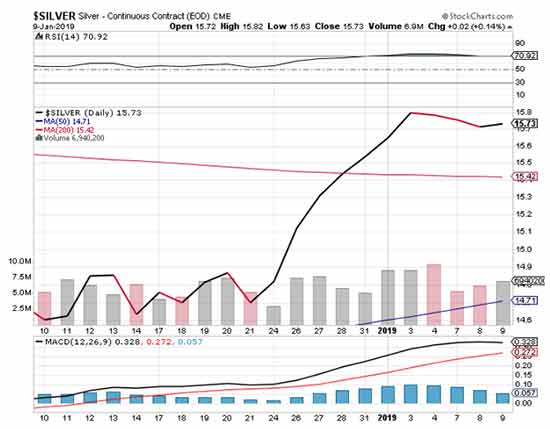 This first chart shows how silver climbed for seven consecutive trading days from Dec. 24 through to Jan. 3. The key takeaway here is that, historically, multiple consecutive up days like this has led to considerable gains over the next several months.

And looking at silver over the past year shows what that seven-day winning streak looks like. 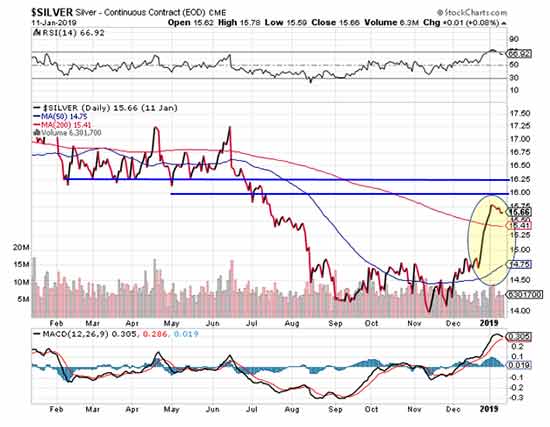 Notice how that rally has pulled silver up above the 200-day moving average, cementing the stance that silver has returned to bull-market status.

It’s possible we’ll even see a bit more weakness in silver before it powers higher. The RSI and MACD are looking a bit stretched. If that happens, look for the $15.40 level, the current 200-day moving average, to act as support.

I think silver’s next big move will be to the upside, with targets $16 and $16.25 in sight. Given how $16.25 has acted as support between February and June, I think this level could become the new “floor,” or support.

With silver behaving so well and back in bull territory, now’s a great time to get on board.

Like I recommended in this week’s gold missive, there’s also a way you can “juice” your silver returns.

The ProShares Ultra Silver ETF (NYSE: AGQ) is built to provide investors with twice the daily returns of silver bullion (before fees and expenses). 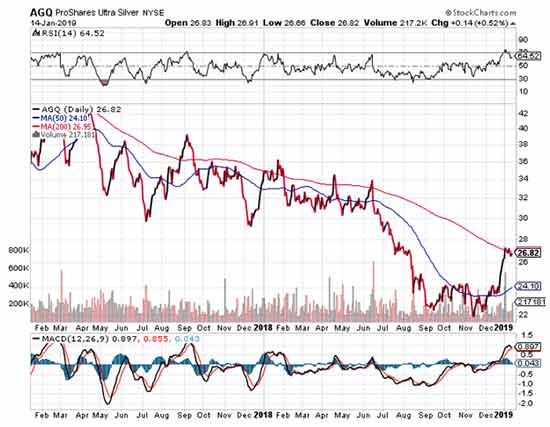 Its shares have jumped alongside the recent rise in silver. But keep in mind, its leverage is two-sided, meaning a drop in silver prices will be magnified by AGQ.

Still, investors can buy now and plan to hold as long as silver remains in an uptrend above its 200-day moving average. Alternatively, you can wait for a pullback in silver to buy AGQ, but there’s no guarantee that will happen.

Silver miners can offer even more than 2x leverage over the silver price, so they can be pretty volatile. But given that the uptrend in silver is just getting started, I think your downside from here is very limited.

And thirdly, for those willing to take on even more risk, you can buy options on the iShares Silver Trust ETF (NYSE: SLV), which is backed by physical silver and quite closely tracks silver prices after expenses.

The options I’d suggest are long-dated two-year calls, giving holders plenty of time for the silver rally to play out. Consider the SLV January 2021 calls with a strike price of $15. These are sure to be volatile, but could generate triple-digit returns for investors.

Silver’s momentum has become undeniable, with the precious metal now in bull mode. More than ever, silver belongs in your portfolio, and these three silver investments should provide big leverage.