You’ll always find holdouts on the wrong side of a bubble.

Bitcoin is no exception…

Even today – after an 80% decline – we see wild claims from the bubble-believers.

“Bitcoin’s coming back any day now!” they say. “It’ll be making new highs again in a year!”

It’s easy to understand why these claims are popular. Many bought at bitcoin’s explosive peak. And still more bought on the way down. They want to believe it will soar once again.

Even worse, those who bought the cryptocurrency years ago have been trained to buy the dips. That idea even birthed a bitcoin-specific slang term, “hodl.” It means just holding, no matter how volatile the market gets… in the hopes of another big upswing.

History tells us that bubbles don’t inflate back-to-back. We’re now on the other side of the bitcoin bubble. And that means expecting new highs to happen anytime soon is a bad bet.

Some might doubt this. They might say that we can’t know for sure we’re on the other side of the bubble. But if you simply look at the facts, it becomes obvious.

Few realize just how big bitcoin’s bubble really was. To get a handle on it, we’ll compare it to the biggest bubble in recent memory… the dot-com bubble of the late 1990s.

Back then, the Internet was changing the world. Companies went public without any earnings, or even much of a business plan… and shares soared.

It was a truly crazy time… a huge run-up, followed by a huge crash. But even the dot-com bubble was nothing compared to the bitcoin craze of 2017.

The chart below compares these two bubbles. It shows two years of data for each bubble… one year before the peak, and one year after. Take a look… 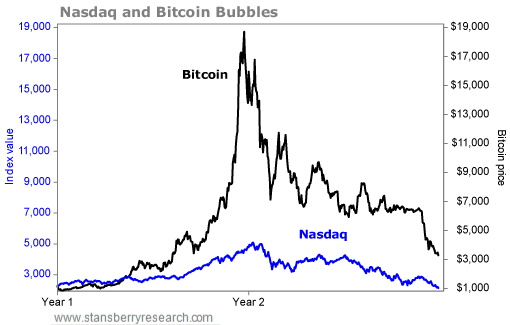 Looking at this, it becomes clear…The bitcoin bubble was one of the most massive manias in history.

The Nasdaq soared 120% in the last year of its meteoric rise. Bitcoin shot up a preposterous 2,400%.

Bitcoin’s rise dwarfs the dot-com bubble. And the fall from its incredible heights has been nothing short of cataclysmic.

Regardless, bitcoin believers are quick to point out that bitcoin has always been volatile. It has always charged back. Why should now be any different?

The short answer is that it’s almost unheard of for a bubble to form in the same sector immediately after a crash.

It took the Nasdaq 15 years to reach a new high after its peak in 2000. The bubble didn’t come right back… because that’s not how bubbles work.

Bitcoin could re-inflate. Crazier things have happened. But I wouldn’t bet on it happening anytime in the near future…

We can’t assume bitcoin will boom again simply because it has in the past. The 2017 bitcoin mania was different from past bitcoin booms. Prices accelerated thanks to a completely different kind of investor…

Normal folks were buying in. Unsophisticated investors bought in for what seemed like easy money. It was classic bubble behavior. These investors helped push prices to obscene heights… Then, the bubble popped.

Now broad market investors know bitcoin isn’t a one-way trade. It’s dangerous and volatile. Folks have been burned… And most ordinary investors are gun-shy. They won’t be rushing in again anytime soon.

Again, it took the Nasdaq a full 15 years to start making new highs. The stigma of major losses had to wear off before prices could move dramatically higher.

The bubble couldn’t re-inflate right away… because that’s not how bubbles work.

Prices could rise from here. And bitcoin itself could stand the test of time. But even if both of those things happen, it could be years before we see new highs again.

So if you’re holding out hope for bitcoin mania 2.0… don’t expect it anytime soon.