PerkinElmer (NYSE: PKI) – is considered part of the healthcare sector and it provides diagnostic equipment, services and solutions to the industry. The company’s products help analyze the quality of air, water, and soil to the environmental market. This is done through its Discovery & Analytical Solutions and Diagnostics division.

PerkinElmer’s second division is the Diagnostics segment. This segment provides instruments, reagents, and software that test and screen products for the early detection of genetic disorders. The company is headquartered in Waltham, Massachusetts and was founded in 1931.

Over the last three years the company has averaged annual earnings growth of 13% and it saw earnings grow by 23% in the most recent quarterly report.

Analysts expect earnings to grow by 24% for the year as a whole.

Sales jumped by 22% in the latest quarterly report and analysts expect sales to grow by 22.8% for 2018 as a whole.

Those growth rates are considerably higher than the last three years when PerkinElmer has averaged annual sales growth of 7%.

The management efficiency and profitability measures for PerkinElmer are above average, but not unsustainable. The return on equity is at 13.9%, the profit margin is at 18.6%, and the operating margin is at 13.9%.

With a company with such strong fundamentals like PerkinElmer, I would expect to see a short interest ratio around 3.0 and for 70% of analysts to have the stock rated as a buy. This pessimism toward the stock can serve to boost the stock should it continue to rise as the bearish sentiment can turn bullish and drive the share price higher. 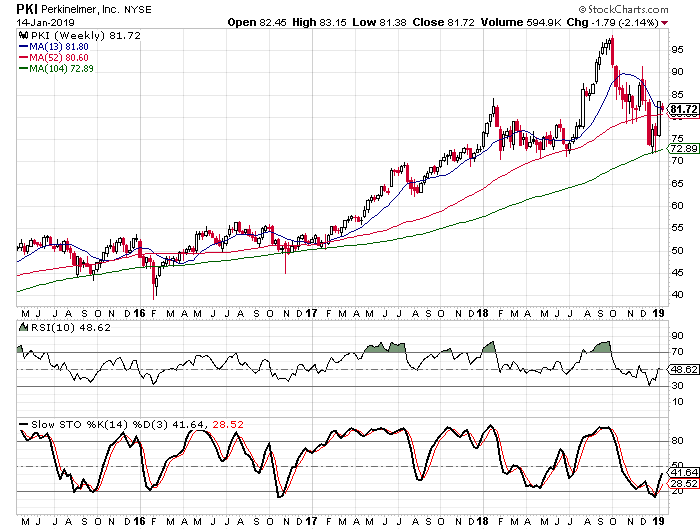 The weekly chart for PerkinElmer shows that the stock recently pulled back to its 104-week moving average and that trend line served as support. The stock has since bounced back over 14% in recent weeks, but the weekly stochastic readings are barely out of oversold territory. It is also worth noting that the stochastic readings have completed a bullish crossover in recent weeks.

We saw the stock dip to its 104-week moving average and the stochastic readings drop in to oversold territory back in November ’16 as well. The stock was trading around $50 at the time and went on to gain approximately 40% in the next eight months.