Darden Restaurants (NYSE: DRI) – You might not know the name Darden, but I am guessing you are familiar with their brands. The company operates a network of full-service restaurants and the brands include Olive Garden and LongHorn Steakhouse. As of the end of May, the network included 1,746 restaurants. Darden is headquartered in Orlando, Florida and was founded in 1968.

Darden’s earnings’ growth has been solid in recent years. The company has grown earnings at an annual rate of 17% per year over the last three years and it saw earnings grow by 26% in the most recent quarterly report. Analysts expect earnings to grow by 18% for the year as a whole.

Sales haven’t grown as fast as earnings, but they have grown pretty consistently.

The annualized rate of growth over the last three years is 7% and the most recent quarter saw sales increase by 5%.

Analysts are predicting sales growth of 5.4% for the current year.

The company’s efficiency measurements are also above average with a return on equity of 28.2%, a profit margin of 9%, and an operating margin of 9.97%.

Despite the solid fundamentals and an upward trend in the stock, the sentiment toward Darden is skewed to the pessimistic side. 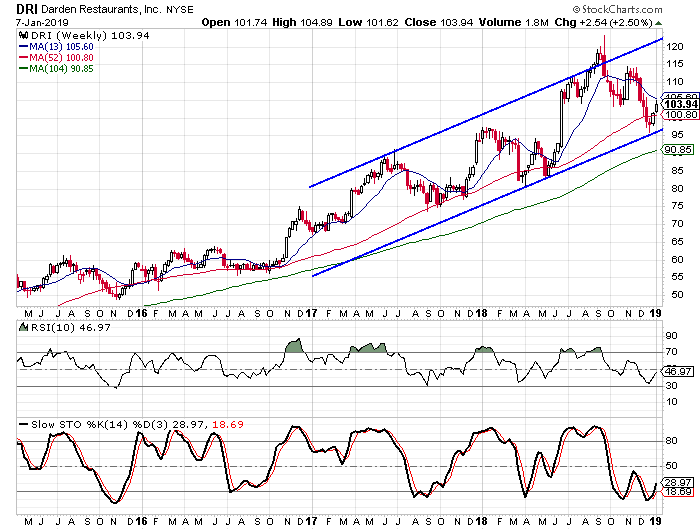 You can see on the chart that Darden has been trending higher since the end of 2015. A trend channel has formed in the last few years and the stock has just bounced off the lower rail of the channel.

We also see that the weekly stochastic readings just hit oversold territory and made a bullish crossover in the past week. The stochastics did a double-dip in oversold territory, but the first one didn’t have the secondary driver of having the lower rail to serve as support.