You’ve probably heard of General Mills. The company is famous for selling iconic cereals like Cheerios and Lucky Charms, but cereal isn’t the only item it sells.

The company has an impressive product portfolio. You probably have one or more of its brands in your pantry, refrigerator or freezer. General Mills’ brands include Betty Crocker, Yoplait, Pillsbury and Häagen-Dazs.

The past few years have been tough on General Mills. Consumers, especially millennials, have shifted away from packaged foods in favor of fresher, healthier options. General Mills’ stock price is down 37% in the last 10 years, while the S&P 500 index has risen 10%. 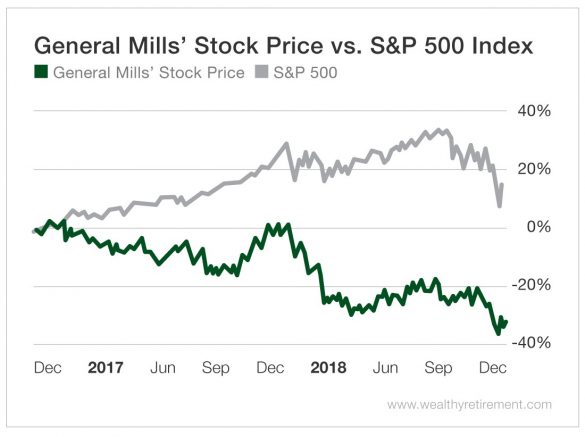 Because of its share price decline, General Mills’ dividend yield is now a tasty 5%. Let’s find out if the dividend is safe or if it’s about to get soggy.

A Turnaround With a Doggone Dividend Freeze

To jumpstart growth, General Mills made a major acquisition last year. In February, the company announced that it was buying natural pet food company Blue Buffalo for $8 billion.

Pet food is a new product category for General Mills, but it was a good move…

The pet food market is projected to reach nearly $99 billion by 2022.

And Blue Buffalo is the fastest-growing pet brand sold by food, drug and mass retailers. It’s also the No. 1 brand in the pet specialty and online pet food markets.

General Mills used cash on hand, debt and about $1 billion in equity to complete the acquisition in April.

The deal increased the amount of debt on General Mills’ balance sheet, so it announced that it would maintain rather than grow its quarterly dividend. That way it can concentrate on reducing its debt load.

After more than 10 years of dividend increases, investors were disappointed. But with a 119-year history of paying dividends, General Mills’ current annualized dividend of $1.96 per share doesn’t look to be in danger. 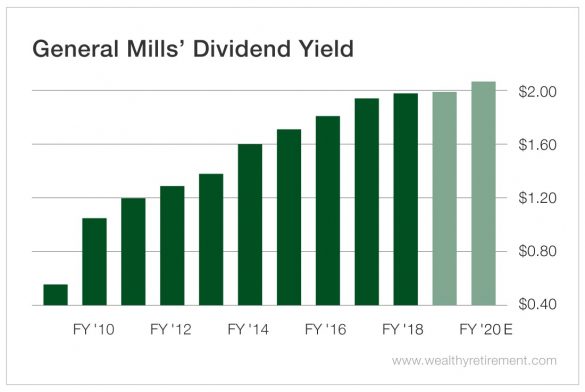 General Mills is generating plenty of free cash flow to pay down debt and fund the dividend.

Mills’ free cash flow is expected to dip in fiscal year 2019 as it integrates with Blue Buffalo and pays down debt.

A company’s fiscal year is any 12-month period that it uses for accounting purposes. General Mills’ fiscal year ends on May 31, 2019.

General Mills is expected to pay $1.2 billion in dividends in 2019, giving it a 66% payout ratio. (Remember, Marc looks for companies that are paying out less than 75% of their net income as dividends.)

So while its dividend may not be growing, it’s still safe.

How to Manage Your Response in Today’s Market